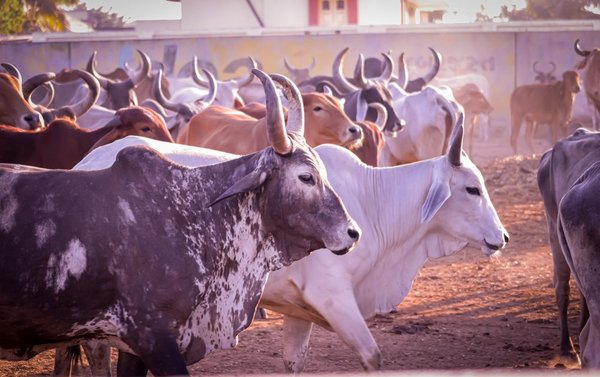 The farming of livestock to feed the global appetite for animal products greatly contributes to global warming. However, a new study shows that thanks to greater production efficiency, emission intensity per unit of animal protein produced from the sector has decreased world-wide over the past two decades, raising questions around the extent to which methane emissions will change in the future and how we can better manage their negative impacts.

The livestock sector is the largest source of anthropogenic methane emissions globally, and these emissions are projected to keep increasing along with the growing demand for livestock products such as meat, eggs, and dairy. This is bad news for the planet as methane – the second most abundant anthropogenic greenhouse gas after carbon dioxide (CO2)– has a warming effect 28 times greater per kilogramme than that of CO2 over a 100-year period.

Following the recent revision of the Intergovernmental Panel on Climate Change (IPCC)’s emission factors and methodology for livestock methane emissions, an international team of researchers led by International Institute for Applied Systems Analysis (IIASA) guest researcher Jinfeng Chang set out to re-assess global livestock methane emissions over the past two decades and project emissions till 2050. Their study, just published in AGU Advances, is the first to apply the revised IPCC guidelines globally and assess the resulting differences in future projections of methane emissions.

While total emissions for the sector continue to increase, the findings indicate that emission intensity actually decreased overall for most livestock categories globally between 2000 and 2018 per kilogramme of protein (in products including milk and meat from cattle, buffaloes, goats, and sheep, meat from pigs and meat and eggs from poultry).

A regional analysis provided a more nuanced picture, showing that while intensities may be decreasing across the board, regional differences remain. These variations in intensity can mainly be attributed to differences in productivity, which can in turn be explained by differences in diet and/or grazing intensity, with a less nutritious/digestible diet.

For pigs and poultry, the management of manure accounted for the majority of methane emissions. Regional differences in emission intensities were also influenced by climate (with warmer climate enhancing emissions) and the manure management system employed.

“The continuation of the past decreases in emission intensity provides a large potential to mitigate livestock emissions, especially in a number of developing countries in Africa, Asia, and South America,” the researchers have found. “Efforts on the demand-side to promote balanced, healthy, and environmentally sustainable diets in most countries can mitigate future livestock methane emissions, but will not be sufficient for livestock methane emission mitigation without parallel efforts to improve production efficiency and decrease the emission intensity per unit of protein produced,” they explain.

According to Chang, efforts to decrease emission intensity should be prioritised in developing countries with the largest mitigation potential as improving production efficiency has a much greater mitigating effect than demand-side efforts. In this regard, China, India and South Africa emerged as the three countries with the highest mitigation potential.

“From our projections until 2050, sustainable diets are projected to result in 190-206 teragrams (Tg) less methane emissions in total (aggregated from 2012 to 2050) compared to a business as usual scenario, resulting in a 3-4 per cent mitigation of accumulated emissions from 2012 to 2050. Improving efficiency, on the other hand, can result in 821-1,077 Tg less methane emissions in total than business as usual under constant intensity – a four-fold larger mitigation potential – thus mitigating total emissions by 15-16 per cent,” adds Chang.

In light of the above, however, the researchers emphasise that their findings do not imply that they endorse the industrial livestock system for methane mitigation, as it causes many other environmental problems like pollution from failed manure management and land-use change for grain and high-quality fodder cultivation.

They point out that there are many other, more sustainable ways to improve efficiency and that improvements to livestock production efficiency should take place in line with the natural circumstances in the respective regions. For example, in semi-arid regions where increasing crop production for feeding livestock is impossible due to water limitations, such as in Central Asia, improving grazing management to increase productivity should be prioritised as a sustainable solution rather than moving from low to industrialised systems.

“An optimal strategy should always consider other relevant sustainability goals like biodiversity, water pollution through nutrient runoff, and the potential implications for livelihoods and resilience to climate change impacts,” Chang concludes.