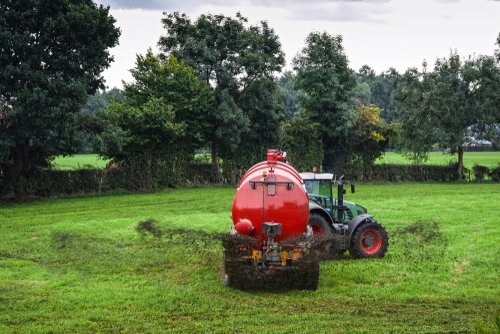 Nitrogen is a key fertiliser in agriculture. Its overuse leads to serious pollution in the water system.
Photo: shutterstock/Reinhard Tiburzy

Excessive nitrate in lakes, seas and rivers can increase algae growth that may lead to toxic blue-green blooms. The International Atomic Energy Agency (IAEA) has developed an innovative method to trace the origin of nitrate pollution in water.

Water is naturally tagged with isotopic “fingerprints” which can be used to determine the source, age, movement and interactions of water above and below ground. This information provides a scientific basis for the sound management of water resources.

Excessive use of nitrogen has resulted in serious pollution of water  systems with nitrate. Now, the IAEA, in collaboration with the University of Massachusetts, Dartmouth/USA, offers an innovative method for tracing the origin of nitrogen pollution in lakes, seas and rivers. The nuclear-derived analytical tool provides a cheaper, safer and faster way to determine whether excessive nitrogen compounds in water stem from agriculture, sewage systems or industry, helping prevention and remediation efforts.

Nitrogen, an essential and abundant element on Earth, is a key fertiliser that has been widely used in agriculture since the mid-1900s. “One of the major global problems in terms of water quality is that we have been over-fertilising our landscapes for decades, either with manure or synthetic fertilisers,” said Leonard Wassenaar, head of the IAEA Isotope Hydrology Section at the IAEA. “All of these nutrients, particularly nitrogen forms such as nitrates, are seeping into groundwater and eventually into rivers, lakes and streams.”

The excessive nitrate levels increase algae growth that can lead to toxic blooms. These also sink to the bottom of lakes, feeding bacteria and creating so-called ‘dead zones’. “We now see more fish kills, where thousands of fish float to the surface because the bottom of the lake where they normally dwell is depleted of oxygen from a rain of organic material,” Wassenaar said.

Removing nitrates from water is very difficult and expensive, so tools are needed to understand nitrogen sources and pathways to better inform water protection and remediation efforts.

Isotopes can be used to measure nutrients in water

The new method, presented at the IAEA International Symposium on Isotope Hydrology in May, and published in the international journal Rapid Communications in Mass Spectrometry, measures the amount and proportion of nitrate stable isotopes in water. Nitrogen has two stable isotopes, or variations of its atoms, with different weights. Since the weight difference is not the same in human waste or fertilisers, for example, the isotopes can be used to identify the source.

“Isotope tools are very powerful to measure nutrients in water,” said Wassenaar, “but historically their use has been very difficult, hampered by cost and accessibility. The new technique allows scientists to run more samples, and much more cheaply for large scale studies. I think it is a game changer.”

The new method uses a form of titanium chloride – a salt – to convert nitrate in a water sample to nitrous oxide gas. From this gas, the isotopes can be analysed with equipment such as a mass spectrometer or a laser. Current methods use genetically modified bacteria or the highly toxic metal cadmium for the nitrous oxide conversion, making them laborious, costly, and limited to a handful of highly specialised laboratories.

“It is a relatively simple method for what used to be a very complex and expensive process,” said collaborator Mark Altabet, a professor of estuarine and ocean sciences at the University of Massachusetts Dartmouth’s School of Marine Science and Technology. Sample analysis costs five to ten times less than previously, and it takes only minutes to prepare samples.

The IAEA promotes the application of nuclear and isotopic techniques to determine water source, age, quality and sustainability, in order to help countries better manage this vital resource.

Link to the IAEA– International Symposium on Isotope Hydrology:
https://www.iaea.org/events/international-symposium-on-isotope-hydrology-2019