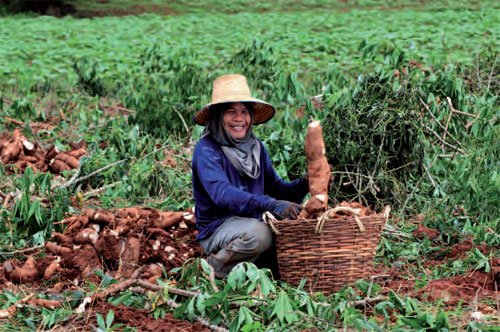 Cassava is the primary staple food in many countries – be it in Africa, Asia or South America.
Photo: CIAT

Production of cassava, one of the world’s most important food crops, is precarious and could collapse under a combined onslaught of pests and diseases, according to a new study by scientists at the International Center for Tropical Agriculture (CIAT).

The study “Threats to cassava production: known and potential geographic distribution of four key biotic constraints”, recently published in the journal Food Security, identifies hotspots around the cassava-producing world where conditions are right for outbreaks of some of the crop’s most formidable enemies: whitefly, green mite, cassava mosaic disease and cassava brown streak disease.

By using a technique known as ecological niche modeling, CIAT scientists conducted a detailed global risk assessment for cassava, in relation to the four pests and diseases. They compared cassava-producing areas where they are already present with areas that have similar environmental conditions, but where specific pest and disease pressure is either absent or low. They found that the conditions are right for combined outbreaks of all four pests and diseases in some of the world’s major cassava-producing zones. These include Africa’s Rift Valley region, much of Southeast Asia, southern India, Mato Grosso state in Brazil, and northern South America.

The researchers identify movement of infected propagation material as a major cause of the spread of pests and diseases which could enable a pest or disease to jump continents. They highlight the need to refine and enforce the protocols for the movement of propagation material, and also call for more formal international early warning systems for cassava in order to ensure a swift response to any outbreaks.