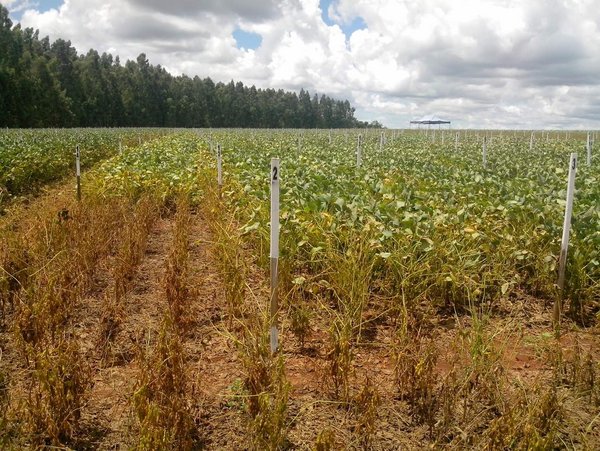 Asian Soybean Rust poses a significant threat to soybean producers. An international consortium of plant researchers has now achieved an important milestone in the fight against this devastating soybean disease.

Asian Soybean Rust, which is caused by the fungus Phakopsora pachyrhizi, poses a significant challenge for soybean producers. Under climate conditions that are favourable to the pathogen, this devastating disease can lead to yield losses of up to 90 per cent if it cannot be controlled.

Crop protection costs for farmers already exceed two billion US dollars (USD) per season in Brazil alone, where about 192 million tons of soybeans, amounting to a gross production value of 61.4 billion USD, are produced each year. An international consortium involving RWTH  (Rheinisch-Westfälische Technische Hochschule ) in Aachen, Germany, and the University of Hohenheim in Stuttgart, Germany, has now succeeded in completely sequencing the pathogen’s complex genome. The consortium members hope their findings will lead to new strategies being developed to combat the pathogen.

"The pathogen is very adaptable, but the number of practical solutions to combat the disease is limited. In order to accelerate innovations and identify new mechanisms of action against P. pachyrhizi, comprehensive knowledge of the pathogen’s genetic composition is essential," said Professor Ralf Vögele, head of the Department of Phytopathology at the University of Hohenheim. "However, up to now, sequencing the genome has been considerably more difficult due to the genome’s extraordinary complexity.”

"We have been researching Asian Soybean Rust in Aachen since 2004 and are concentrating on application-oriented approaches,” report Professor Ulrich Schaffrath and Professor Uwe Conrath from the Department of Plant Physiology at RWTH. "The current breakthrough in sequencing the P. pachyrhizi genome opens up completely new perspectives for sustainably protecting global soybean production.”

An international consortium of twelve public and private institutions has accepted this challenge. Besides RWTH and the University of Hohenheim, the following institutions are also involved: the 2Blades Foundation, Bayer CropScience, the Brazilian Agricultural Research Corporation (Embrapa), the French National Institute for Agricultural Research (INRA), the Université de Lorraine, the Joint Genome Institute, (JGI) of the US Department of Energy, KeyGene, the Sainsbury Laboratory, Syngenta, and the Universidade Federal de Viçosa in Brazil.

The consortium made the breakthrough with the help of the latest high-end sequencing technologies: it completely sequenced the genome of three P. pachyrhizi isolates, including two from Brazil.

P.pachyrhizi genome is one of the largest genome among fungi

"The P. pachyrhizi genome comprises more than one billion base pairs and is thus one of the largest genomes among fungi," said Ralf Vögele. "Despite the genome’s enormous size, the number of identified genes is similar to that of other rust fungi. A detailed investigation revealed that the majority of the genome consists of mobile genetic elements that could enable the pathogen to quickly adapt to a new environment or other soybean varieties.”

The consortium hopes that the data it has released will be used by the scientific community to further explore the adaptability, evolution, and genetic diversity of P. pachyrhizi. This in turn could help find new and environmentally friendly solutions to combat soybean rust.

All The Released Data Is Available on The JGI's Website
https://jgi.doe.gov/