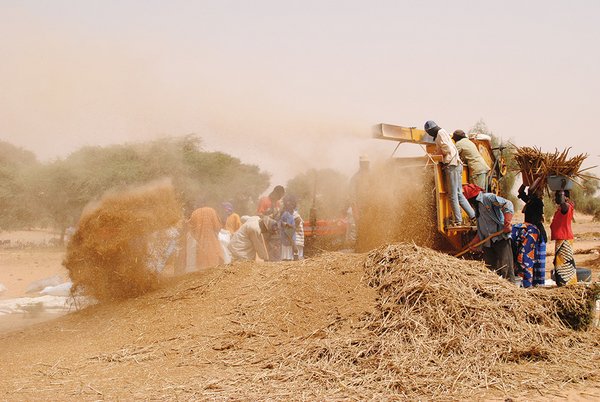 Shifting rainfall patterns and insufficient yields are an important reason to migrate during the dry season for people in the West African Sahel.
Photo: D. Hummel

Climate change, environment and migration in the Sahel

In the debate on climate change, it is frequently argued that the number of “climate refugees” is going to grow world-wide. So far, however, only little evidence has been provided of links between climate change, environmental changes and migration. The transdisciplinary research project “micle”– migration, climate & environment – has examined this link in selected areas of the Sahel zone.

The transdisciplinary research project micle – migration, climate & environment – was funded by the German Federal Ministry of Education and Research (BMBF), and conducted by the Institute for Social-Ecological Research (Frankfurt, Germany) in cooperation with the Institute for Geography at Bayreuth University. It investigated the relationship between climate, environmental degradation, and migration in selected areas of the Sahel region.

The West African Sahel is one of the regions most vulnerable to climate change and climate variability. The study “micle” – migration, climate & environment – focused on land degradation as an example of gradual, slow-onset environmental changes and its impacts on population mobility. It pursued an inter- and transdisciplinary approach which combined natural science and social science methods and also included input e.g. from farmers, migrants, and development organisations.

Case studies were conducted in two regions: Linguère in Senegal and Bandiagara in Mali (see Map). Both study areas are located in the semiarid Sahel zone and have always suffered from periods of drought and, in part, from land degradation. Climatic changes and human activities have contributed to massive changes of the flora, fauna and soils in the rural study areas. After an extremely dry period with severe droughts from the 1970s to the 1990s, rainfall has been increasing in both regions, but its variability is growing, too. These changes are causing an increase in vegetation in many areas – the so-called ‘greening phenomenon’. This trend is supported by farmer-managed agro-forestry, reforestation programmes and nature conservation measures.

In spite of this positive trend, effects of climate change such as higher temperature and less precipitation have contributed to a decreasing diversity of woody species and favoured the increase of robust and more droughtresistant species. In some places, overgrazing, deforestation and the expansion of agricultural areas have contributed significantly to spreading land degradation. Thus, the causes of the environmental changes are both climatic and anthropogenic.

Livelihoods in Bandiagara and Linguère – and the impact of climate change

The two study regions in Mali and Senegal were also selected for the reason that they are subject to an increasing out-migration. The micle project investigated in detail how the local population perceive environmental changes, as well as their motives for migration. Among other methods such as in-depth interviews and participant observation, a standardised survey was conducted with more than 900 persons: villagers living in the rural areas of Bandiagara and Linguère as the home places and migrants in the capitals Bamako and Dakar, two important destinations.

The results show that agriculture is the paramount economic activity and source of income in both rural study areas. The majority of interviewees and their families are engaged in arable farming, and, particularly in Senegal, in livestock breeding. In many cases, agriculture is combined with other activities such as gardening or small-scale business.

The level of education is considerably low – almost 80 per cent of the survey participants have no formal schooling at all, and at 70 per cent, the illiteracy rate is high. The lower the education level, the more likely for agriculture to be the main source of income in the rural areas.

Households which are highly dependent on rain-fed agriculture are particularly vulnerable to rainfall variability and ecosystem degradation because these environmental factors have negative effects on crop yields and harvests. A villager in Linguère reported: “Rainfall is becoming more and more erratic, and the rainy season has got more unreliable during the last few years.” Similarly, an elder farmer in Bandiagara noted: “Since the drought in the 1970s, there have been increasing anomalies in grain yields, and also insufficient rainfall.” Inadequate rainfall can directly compromise the income basis of rural households, because it affects the agricultural production and returns.

Against this background, migration can be one strategy for reducing the risks and compensate bad harvests by means of income diversification. However, it is not the only risk-minimising strategy referred to by the interviewees. In Bandiagara and Linguère, people adopt different strategies to cope with negative effects of environmental changes such as crop failures. In Mali, for example, important compensation strategies include asking for more financial support from family members who have already migrated, and to increase the number of migrants within the family. In Senegal, there are other important strategies such as the sale of cattle. In both regions, mutual aid among the villagers is mentioned as an important response to crop failures and income losses.

Population mobility and motives for migration

Migration plays an important role in the Sahelian culture. This fact was verified in the social-empirical analysis: 87 per cent of the survey participants have personally experienced migration. The great majority regard migration as something positive: 86 per cent would recommend migration to other family members. Temporary movements (10 months to less than five years) and seasonal migration (3 to 9 months) are the most dominant temporal migration patterns (each around 40 %). People practising seasonal migration leave the villages during the dry season and return back home for the harvest time. At around 24 per cent, permanent migration (more than five years absence from place of origin) is relatively low.

Similar to other West African countries, migration in Mali and Senegal is predominantly internal and regional. Eightysix per cent of the respondents had moved within the countries, particularly to larger urban areas; the capitals Bamako and Dakar are the most important destinations. In Senegal, only four per cent of the respondents crossed international borders, the majority of whom moved to European destinations (France, Spain, Italy). In Mali, the percentage of international migration is significantly higher (25 %), with Ivory Coast as the main destination. Usually, migrants maintain close relationships with their families and home villages.

Asked why they migrate, people’s answers show that economic motivations – seeking money and jobs – are the most important reasons to leave home, although they usually overlap with other motivations. Family reasons, visits and education, are other important causes to migrate. Food security is mentioned by 29 per cent of respondents in Senegal and six per cent in Mali. This motive is in close relation to environmental, but also economic factors.

For many interview partners, shifting rainfall patterns and insufficient yields are an important reason to migrate during the dry season. However, seasonal migration is a long-established strategy to cope with the harsh environmental conditions in the semi-arid rural regions. Seasonal migration is still being practised today, but also in times of favourable rainfall patterns and successful harvests. This indicates that motives for migration are manifold and change over time, and that there is usually not only one single reason behind the decision to migrate. Social relations and migrant networks are important factors for the migration decisions and for the choice of destination.
Moreover, motives for migration differ widely with regard to gender, age and education level. While seeking money and employment is the most important motive for both men and women, this motive is more often mentioned by male respondents. However, family reasons and visits are particularly important for women in general, while economic reasons become more important for younger women.

Migration is closely interrelated to the education level. People with higher formal education are less vulnerable to environmental hazards because they are less dependent on environment-sensitive economic activities. These findings illustrate that individual characteristics such as gender, age and education level are of crucial importance in determining who migrates and who does not migrate, and for which reasons.

Migration as a livelihood strategy

Most people in the study areas in Mali and Senegal rely on small-scale farming and subsistence. But for most households in the rural areas, food security cannot be guaranteed only on the basis of local agricultural production. Although it is impossible to determine the exact role environmental factors play in migration decisions, the micle study revealed how climate change and land degradation affect migration decisions through the following factors:

Individuals, households and communities are not equally affected by climate change and environmental degradation. The most vulnerable are those households that have only a low level of education and who depend strongly on small-scale agriculture. A great number of people affected by poverty have only limited options to master crises and environmental stressors. For them, migration can indeed be the only possibility to improve their food security. For others, migration can be a strategy to minimise risks of environmental stressors. Yet, migration is more than adaptation and not automatically the only last resort. Overall, it indicates the desire for a better life.

The findings of the micle project confirm that climate changes and ecosystem degradation can indeed have effects on the mobility of the people. However, results also show that the relationship between climate, environment and migration is complex, and that environmental stress is usually not the most important factor causing people to migrate. The prevention of migration cannot be regarded as an adequate political option, since mobility is deeply rooted in the history and culture of West Africa. Instead, policies should make use of the positive potential of migration for sustainable development. For example, already existing “co-development” approaches favour the transfer of remittances, knowledge and skills, as well as investments of migrants at home.Investments into sustainable agriculture should be combined with impulses for employment and income opportunities in other economic sectors. Therefore, integrated regional development strategies are required which focus on linkages between urban and rural areas. For example, they should consider infrastructure development and the promotion of integrated land and water resources management for the prevention of land degradation. Above all, the young generation need much better education opportunities in the region. Education is of paramount importance with regard to reducing vulnerability, alongside the improvement of gender equality and empowerment. Cross-sectoral political strategies are thus required which integrate issues of migration, socio-economic development and environment, and which consider the participation of relevant societal actors and stakeholders.

Brandt, M./Romankiewicz, C./Spiekermann, R./Samimi, C. (2014): Environmental change in time series – An interdisciplinary study in the Sahel of Mali and Senegal. In: Journal of Arid Environments, 105, 52–63.

van der Land, V./Hummel, D. (2013): Vulnerability and the Role of Education in Environmentally Induced Migration in Mali and Senegal. In: Ecology & Society 18(4): 14.