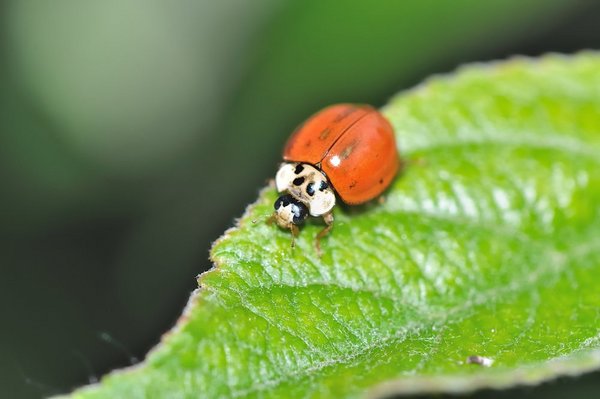 Introducing ladybird beetles as natural enemies of the coconut scale vermin was a remarkable success in biological pest control as far back as the early 20ties of the last century.
Photo: ©Shutterstock/Walter Kalweit

For the first time, an international team of scientists has estimated how nature-based solutions for agricultural pest control deliver USD 14.6 to19.5 billion annually across 23 countries in the Asia-Pacific region.

Biological control of insect pests - where 'natural enemies' keep pests at bay - is saving billions of dollars for farmers in Asia and the Pacific, according to University of Queensland-led research. Dr Kris Wyckhuys from the University of Queensland’s School of Biological Sciences in Brisbane/Australia said biological control involved the careful release of an exotic natural enemy from a pest's native habitat.

"Scientists meticulously choose co-evolved beneficial insects that are the most effective and least likely to pose ecological upsets," Dr Wyckhuys said. "We've reviewed how biological control introductions have effectively managed 43 insect pests in food, feed and fibre crops in the Asia-Pacific region over a century."
The team found that biological control has helped regulate invasive pest threats in multiple key food crops such as banana, breadfruit and coconut.

"Our work shows these techniques are saving farmers in Asia around 20.1 billion to 26.8 billion Australian Dollars (USD14.6-19.5 billion) per year," Dr Wyckhuys said. "That's a phenomenal amount of money and benefit, particularly when compared to other innovations in the agricultural sector.

"A good point of comparison is the Green Revolution in Asia during the late 1960s, which tripled the output of local rice production but also saw a rise of chemical fertilisers, agrochemicals and newer methods of cultivation”, the scientist noted and added: "A large part of the Green Revolution impacts can be ascribed to double-yielding rice varieties, which generated USD 4.3 billion per year in Asia."

Michael Furlong, associate professor at the University of Queensland said that recognition of the success of biological control might lead to greater uptake and more resilient, prosperous farming globally. "Biological control offers great opportunities for some of the world's poorest farmers," Dr Furlong noted and added: "It's promoted rural growth and prosperity even in marginal, poorly endowed, non-rice environments.

Furlong referred to a great example, the coconut scale (Aspidiotus destructor), which had jeopardised the economic prosperity and food security of entire nations. "This coconut scale posed a serious problem to crops like coconut, bananas and copra industries in Fiji at the start of the twentieth century.

According to Furlong, lady beetles from Trinidad and millimetre-long parasitic wasps were introduced in 1928, and the results were almost immediate. Coconut scale ceased to be an economic issue on all of the main Fijian islands within nine months, and after 18 months, the scale was so rare it was difficult to find.