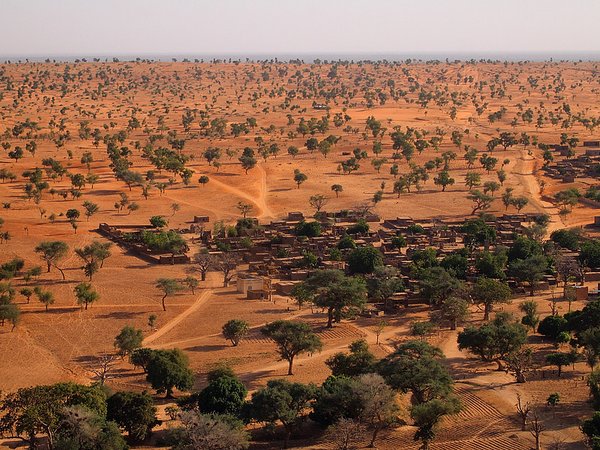 The landscape near Bandiagara (Mali) features many freestanding trees that could be included in the tree counting methods.
Photo: ©Martin Brandt

The results of a research project on the mapping of individual trees and tree groups in West Africa by using artificial intelligence can help strengthen ecosystems in the context of climate change.

The development of forests across the world is a well-researched subject. However, it is just as important to identify individual trees and tree groups. They are of significance for the regional ecology and global climate change. For the first time ever, an international team of researchers recently succeeded in efficiently mapping and counting individual trees in large areas. The core was an artificial intelligence (AI) process (submetre-resolution satellite imagery), which was made to fit for this particular purpose and trained by scientists from the Centre for Computing Technologies (TZI) at the University of Bremen/Germany. The success of the project suggests that it may soon be possible to map all trees on Earth – with minimal restrictions.

As part of the research project, of which the results were recently published in the Nature journal, researchers mapped every tree and bush with a crown that covered a minimum surface of three square metres. The mapping area comprised 1.3 million square kilometres in West Africa. The result is that around 1.8 billion individual trees can be found in the West African Sahara and the adjacent Sahel region – far more than assumed to date. The data gained could help to strengthen ecosystems, obtain data for climate protection and observe the deforestation processes, amongst other things.

The identification of individual trees was made possible due to the fact that NASA and private space travel companies are continually providing more and more high-definition photo material. In order to analyse the masses of data, the TZI scientists Professor Johannes Schöning and Ankit Kariryaa adapted an AI process from the field of “Deep Learning” – namely fully convolutional neural networks. “In the Human-Computer Interaction working group at TZI, we have both the expertise in artificial intelligence and in geoinformatics,” explains  Schöning. “We were thus able to solve this problem together with our friends at the universities in Copenhagen in Denmark and Münster in Germany”.

The chosen AI process can recognise objects – for example treetops – based on their characteristic colours and shapes. The AI system was trained with the help of images in which the trees had been marked by hand. “Due to the special features of the region, we had to overcome many obstacles,” reports Ankit Kariryaa. “For example, the appearance of the vegetation and the ground is extremely different in the regions with low precipitation in comparison to those where it rains a lot. This is why we trained two separate systems.”

The result of this work is a map showing all trees that have a diameter of two metres or above in the South of Mauretania, Senegal and Mali. In the future, it will be possible to  not only expand the results geographically to include all regions of the world, but to also combine them with additional data, such as radar sensors. This could help to determine different tree types, for example.

Nature article: "An unexpectedly large count of trees in the West African Sahara and Sahel"