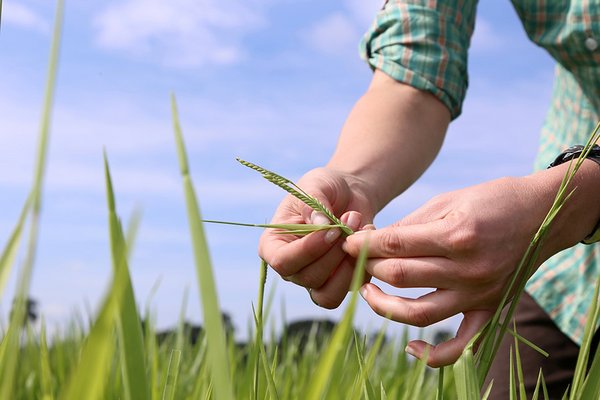 The discovery of genes responsible for asexual reproduction in a tropical grass may reduce negative impacts of cattle farming.
Photo: CIAT/M. Worthington

A genetic breakthrough on tropical grass for climate-friendly cattle farms

Cattle are a mainstay for many smallholders. But smallholdings are often on degraded land, which increases cattle’s impact on the environment and lowers their production of milk and meat. Researchers at the International Center for Tropical Agriculture (CIAT), Cali, Colombia, have shown that Brachiaria grass species can reduce greenhouse gas emissions from cattle and increase productivity – and breeding improved varieties can potentially augment the environmental and economic benefits.

But the breeding process is difficult, time-consuming and expensive. A breakthrough on Brachiaria’s complex genome may make breeding much more efficient, and potentially increase the speed with which new grasses begin benefiting cattle farmers and the environment.

Margaret Worthington, a geneticist at CIAT and the University of Arkansas/USA, and colleagues created the first dense molecular map of B. humidicola, a robust and environmentally friendly forage grass. They also pinpointed the candidate genes for the plant’s asexual reproductive mechanism, which is a huge asset for plant breeders. The findings were published in the open-access journal BMC Genomics.

Traditional plant-breeding methods for Brachiaria grasses involve one of two complex techniques. One is to grow the plant to seed, and to study the seeds under a microscope to determine if the plant reproduced asexually. The other involves excising the plant’s embryos and conducting a similar analysis. Both techniques require many weeks, significant funds and highly trained specialists.

Asexual reproduction through seed, called apomixis, is key in developing new crop varieties for widespread use. Crops that reproduce through apomixis conserve the same traits from one generation to the next, essentially locking in sought-after characteristics such as drought tolerance or high nutritional value. Plants that reproduce sexually do not reliably pass on desired traits to subsequent generations.

With this molecular marker, plant breeders can run a quick and inexpensive test when Brachiaria grasses are seedlings to identify whether they reproduce through apomixis. The results are available in a couple of weeks. This allows plant breeders to select only asexually reproductive plants for trials, allowing them to allocate more time and resources to plants that have the potential to produce new cultivars.

Brachiaria grasses have often been considered an “orphan crop”, due to a lack of investment in research, but their potential for making tropical farms more productive and better for the environment is well-known among tropical forage specialists.

One recent study found that the variety B. humidicola was especially adept at reducing the nitrous oxide, a strong greenhouse gas, emitted from soil as result of cattle urine deposition. In addition, CIAT researchers have identified mechanisms that this tropical grass uses to efficiently acquire nutrients from soil.

Brachiaria breeders also value apomixis for smallholders in developing nations who have limited resources for investing in improving their farms. Enhanced grass varieties that produce sufficient quantities of trait-retaining seeds can eliminate the need to purchase new seeds for every planting, which is a potentially expensive barrier to adoption.

According to Joe Tohme, a senior scientist at CIAT and study co-author, the breakthrough allows for the acceleration of CIAT’s breeding programme for multiple traits, including the development of tropical forages that can help reduce greenhouse gas emissions and make farming more eco-efficient.