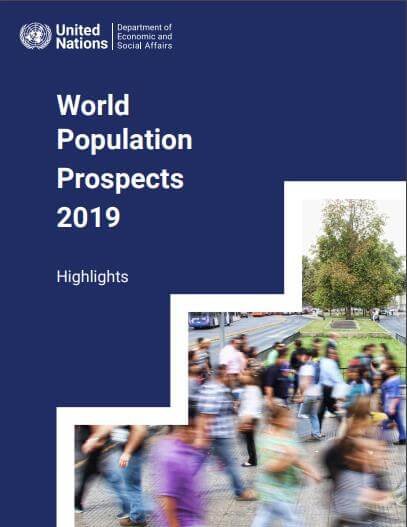 The world’s population continues to increase states a new UN Report. World population is expected to reach 9.7 billion in 2050, while growth rates differ considerably from region to region and some countries are even experiencing population decline.

The world’s population is expected to increase by two billion people over the next 30 years, from 7.7 billion currently to 9.7 billion in 2050, according to the report World Population Prospects 2019: Highlights, which was published by the Population Division of the UN Department of Economic and Social Affairs in mid-June 2019. It provides a comprehensive overview of global demographic patterns and prospects. The study concluded that the world’s population could reach its peak around the end of the current century, at a level of nearly eleven billion.

The report also confirms that the world’s population is growing older because of increasing life expectancy and falling fertility levels, and that the number of countries experiencing a reduction in population size is growing. The resulting changes in the size, composition and distribution of the world’s population have important consequences for achieving the Sustainable Development Goals (SDGs).

More than half of projected population growth in nine countries

The new population projections indicate that nine countries will make up more than half the projected growth of the global population between now and 2050: India, Nigeria, Pakistan, the Democratic Republic of the Congo, Ethiopia, the United Republic of Tanzania, Indonesia, Egypt and the United States of America (in descending order of the expected increase). Around 2027, India is projected to overtake China as the world’s most populous country.

The population of sub-Saharan Africa is expected to double by 2050 – a 99 per cent increase. Regions that may experience lower rates of population growth between 2019 and 2050 include Oceania excluding Australia/New Zealand (56%), Northern Africa and Western Asia (46%), Australia/New Zealand (28%), Central and Southern Asia (25%), Latin America and the Caribbean (18%), Eastern and Southeast Asia (3%), and Europe and North America (2%).

By 2050, one in six people in the world will be over age 65 (16%), up from one in 11 in 2019 (9%). Regions where the share of the population aged 65 years or over is projected to double between 2019 and 2050 include Northern Africa and Western Asia, Central and Southern Asia, Eastern and South-Eastern Asia, and Latin America and the Caribbean.

By 2050, one in four persons living in Europe and Northern America could be aged 65 or over. In 2018, for the first time in history, persons aged 65 or above outnumbered children under five years of age globally. The number of persons aged 80 years or over is projected to triple, from 143 million in 2019 to 426 million in 2050.

Population ageing will have a significant impact the on the labour market and economic performance. Many countries will face fiscal pressures in the coming decades as they seek to build and maintain public systems of healthcare, pensions and social protection for older persons, according to the authors.

The report World Population Prospects 2019: Highlights and related materials are available at https://population.un.org/wpp/