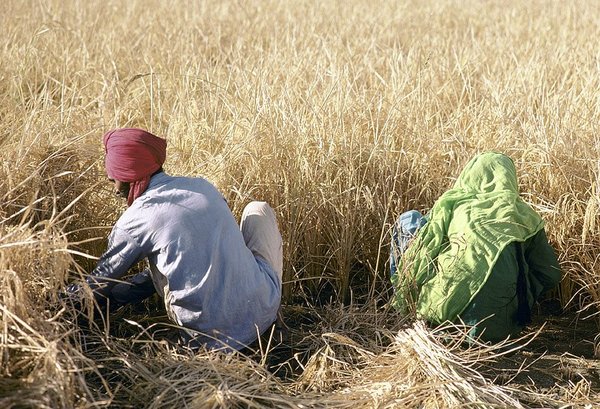 India consumes most of the wheat it produces domestically.
Photo: Ray Within/ World Bank

Why India suddenly banned wheat exports and why it matters

The Indian government’s decision to ban wheat exports has earned the country much criticism internationally, especially given its pledge to provide solutions in a global crisis. While control of domestic wheat prices is among the reasons given for India’s controversial measure, internationally, grain prices continue to rise.

Disruption of wheat exports from Ukraine and Russia following Ukraine’s invasion by the latter had raised hopes among Indian wheat farmers to earn profits in the global market as India had aimed to export ten million tonnes of wheat this year. Ukraine and Russia together account for about one-third of wheat supplies globally, but those supplies have been badly disrupted by the on-going armed conflict between these two European countries.

“We are working with several other ministries – agriculture, railways, shipping – as well as exporters and state governments to increase our wheat exports significantly in the current fiscal,” Piyush Goyal, Minister for Commerce and Industry, was quoted as saying on April 4th by the Indian newspaper Financial Express.

Indian Prime Minister Narendra Modi had sought to use the opportunity provided by the geopolitics to bolster India’s image as a food and a solution provider during global crisis. “At a time when the world is facing a shortage of wheat, the farmers of India have stepped forward to feed the world,” Modi  had said in Germany on May 7th, adding that “whenever humanity is faced with a crisis, India comes up with a solution”.

India, however, abruptly decided to put a ban on wheat exports on May 14th even as some countries had requests to India for wheat imports which the Indian government had said it would consider.

Two days after announcing the ban to control rising domestic wheat prices due to an expected decline in wheat production because of a severe heat wave in the country, on May 16th,  India said that it would keep a window open to export wheat to food-deficit countries at the government level despite restrictions announced earlier. On June 2nd, India said that five or six countries had evinced interest in importing wheat from India, which it was considering.

Even though it is the world’s second-largest producer of wheat, India consumes most of the wheat it produces domestically. Up to 90 million tonnes of wheat were consumed in India last year out of a total production of 109 million tonnes, B. V. R Subrahmanyam, India’s Commerce Secretary, told reporters in New Delhi on May 16th.

The south Asian agricultural giant had sought to capitalise on the global disruptions to wheat supplies following Russia’s invasion in Ukraine by setting a target of exporting ten million tonnes of wheat in the current year to markets beyond India’s traditional wheat buyers. It had identified countries such as Algeria, Egypt, Turkey, Philippines, Indonesia, Lebanon, Morocco, Thailand, Tunisia and Vietnam as potential buyers.

But, the Indian government itself decided to scuttle the efforts for wheat exports in view of its calculations about controlling the domestic wheat prices. Traditionally, major wheat export destinations for India have been mainly its neighbouring countries – Nepal, Bangladesh and Sri Lanka – as also United Arab Emirates (UAE) and Yemen.

Ukraine and Russia accounted for a third of global wheat and barley exports before Russia’s invasion to Ukraine. During the course of the invasion since February 24, Ukraine’s ports have been blocked and civilian infrastructure and grain silos have been destroyed as reported in international media.

India’s ban on wheat exports evoked criticism from the international community particularly the G7 (group of seven) countries. "If everyone starts to impose export restrictions ... that would worsen the crisis," German Food and Agriculture Minister Cem Özdemir had said soon after India announced the ban on wheat exports.

Furthermore, farmers and farmer associations within India responded critically to the ban announced by the Indian government as they had hoped to earn more profits because of the disruptions caused to wheat supplies globally amid a raging conflict in Europe.

“There is a failure of policy arising from lack of reliable data systems with different ministries – the ministries are unable to coordinate with each other,” said Kavitha Kuruganti, leader of the Alliance for Sustainable and Holistic Agriculture (ASHA), which isa volunteer-driven, large informal national network of organisations and individuals in India that promotes farmers’ rights and food security.

Kuruganti said that farmers and traders needed a predictable policy environment, adding that there should be no midway changes in export-import policies between the sowing season and marketing.

According to the latest Food Outlook report of the United Nations Food and Agriculture Organization (FAO) released on June 9th, global wheat markets are embarking on the 2022/23 season with a great deal of uncertainty. The impacts of the on-going war in Ukraine, trade policy changes in several countries and high international prices will shape much of the wheat market outlook, notes the report. It goes on to say that international wheat prices are at levels not reached since 2008, following a season of tight global availability due to reduced harvests in some major exporting countries and export suspensions by others, including Ukraine (a major exporter) and India (an emerging exporter), along with supply concerns for 2022/23 also adding pressure.

“Global wheat production in 2022 is predicted to decline from the 2021 record level by 0.8 per cent, reaching 771 million tonnes and marking the first drop in four years. Year-on-year falls in production in Australia, India, Morocco and Ukraine will likely outweigh expected increases in Canada, the Islamic Republic of Iran and the Russian Federation,” the report said.

With the disruption in supplies due to the war, decline in production and countries like India reluctant to export wheat, the prices are showing an increasing trend.

On June 6th, the BBC quoted Kelly Goughary of the agriculture data research group, Gro Intelligence, as saying that India's ban led to a further price surge because "global buyers were depending on supplies from India after exports from the Black Sea region plunged". Just before announcing the ban, India was aiming to boost exports by shipping a record ten million tonnes of wheat this year – compared with just two million last year.

In this context, it will be interesting how India ultimately decides on the requests from some countries for wheat supplies, which it says are currently under consideration. The International Monetary Fund has also urged India to reconsider the export ban, saying it could play a significant role in helping alleviate the current wheat supply crisis for those countries most affected by the war in Ukraine.