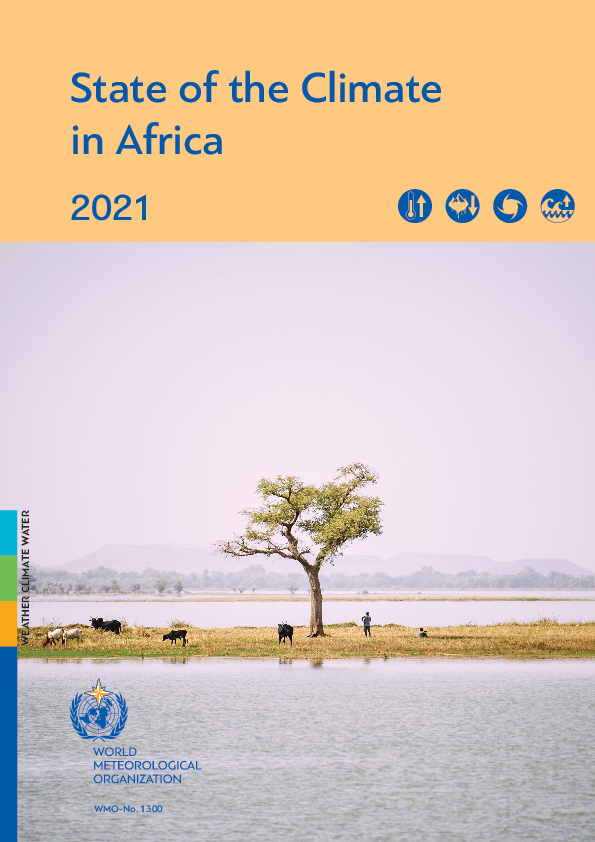 The State of the Climate in Africa

Climate Action in Africa is gaining momentum, but more is needed, a new report states. It makes a number of recommendations, including strengthening early warning systems and increasing transboundary cooperation, data exchange and knowledge sharing.

Rising water demand combined with limited and unpredictable supplies threatens to aggravate conflict and displacement, according to the report The State of the Climate in Africa 2021, published by the World Meteorological Organization (WMO) in September 2022.

The report provides scientific information on temperature trends and other climate indicators. It shows how extreme weather and climate change are undermining human health and safety, food and water security as well as socio-economic development. Africa only accounts for about two to three per cent of global greenhouse gas emissions but suffers disproportionately from their impacts.

Increased temperature contributed to a 34 per cent reduction in agricultural productivity growth in Africa since 1961 – more than any other region in the world. This trend is expected to continue in the future, increasing the risk of acute food insecurity and malnutrition. A global warming of 1.5 °C is projected to be accompanied by a decline of 9 per cent of the maize yield in West Africa and 20-60 per cent of the wheat yield in southern and northern Africa.

The State of the Climate in Africa 2021 report has a special focus on water. Water stress and hazards like withering droughts and devastating floods are hitting African communities, economies and ecosystems hard.  Rainfall patterns are disrupted, glaciers are disappearing and key lakes are shrinking.

High water stress is estimated to affect about 250 million people in Africa and is expected to displace up to 700 million people by 2030. Four out of five African countries are unlikely to have sustainably managed water resources by 2030.

Droughts and floods are the top concern. In the past 50 years, drought-related hazards have claimed the lives of over half a million people and led to economic losses of over 70 billion USD in the region. More than 1,000 flood-related disasters were reported involving more than 20 000 deaths in Africa over this period. It is estimated that by 2050, climate impacts could cost African nations USD 50 billion annually.

Currently only 40 per cent of the African population have access to early warning systems to protect them against extreme weather and climate change impacts. Africa is therefore a top priority in the campaign spearheaded by WMO, at the request of UN Secretary-General António Guterres, to ensure universal access to early warnings in the next five years.

However, climate action is gaining momentum. More than 40 African countries have revised their national climate plans (Nationally Determined Contributions) to make them more ambitious and add greater commitments to climate adaptation and mitigation. Over 83 per cent of national climate plans include greenhouse gas reduction targets, with focus areas including energy, agriculture, waste, land use and forestry.

The report, the third in a series, is a joint initiative between WMO and the African Union Commission and includes input from a wide range of UN organisations, National Meteorological and Hydrological Services, development partners and climate experts.