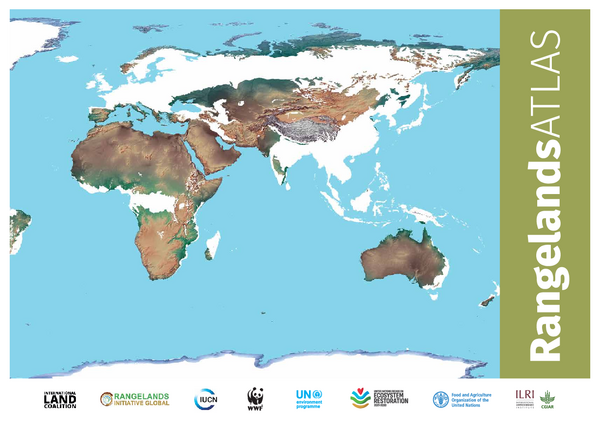 Despite their importance for climate, nature and people, rangelands are threatened with escalating conversion and the drastic effects of climate change. This atlas aims to guide climate and biodiversity negotiators ahead of UN summits.

Rangelands are vast tracts of land covered by grass, shrubs or sparse, hardy vegetation supporting millions of pastoralists, hunter gatherers, ranchers and large populations of wildlife; and they store large amounts of carbon.

The diversity and importance of rangeland environments is mirrored in the diversity of the report’s authors. They include experts from the International Livestock Research Institute (ILRI), International Union for Conservation of Nature (IUCN), the World Wide  Fund for Nature (WWF), UN Environment Programme (UNEP) and the International Land Coalition (ILC), with contributions from the Food and Agriculture Organization of the United Nations (FAO).

This atlas catalogues the contemporary character of the world’s rangelands, which include the Mongolian steppe, the savannas of  Africa, the pampas of South America and the Great Plains of North America. The goal is to make rangelands a prominent part of policy discussions around everything from confronting  climate change to reducing poverty, managing threats to biodiversity and freshwater, and developing sustainable  food systems.

The Rangelands Atlas consists of preliminary maps that are a starting point for gathering more detailed data on  the exact ecosystem services and economic and social benefits that rangelands deliver to people and nature. It is available at www.rangelandsdata.org/atlas.