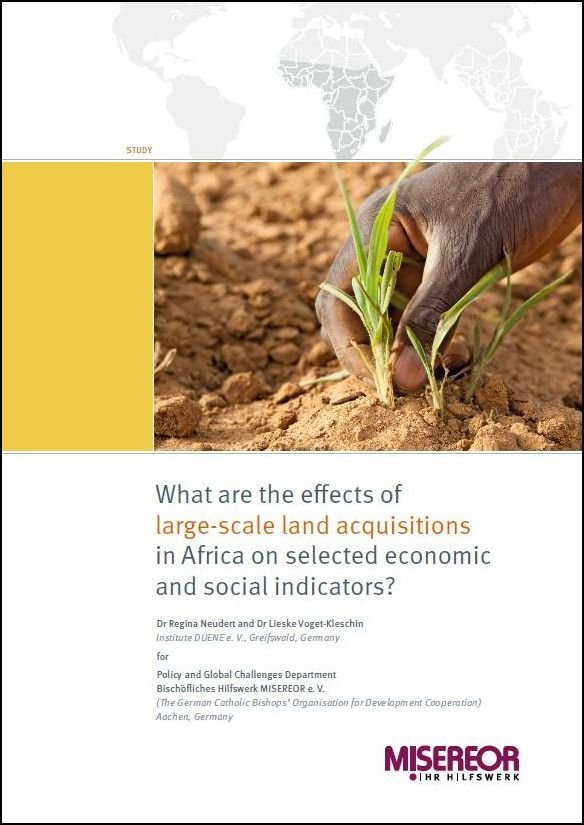 In the Global South, the demand for fertile land has resulted in international investors making large-scale land acquisitions (LSLAs). According to the Land Matrix, 37 per cent of the number of deals worldwide and 34 per cent of the globally acquired land for agricultural purposes is located in Africa.

Proponents of LSLAs argue that in the underdeveloped agrarian sector in countries of the Global South, investments are urgently needed to close yield gaps and satisfy the demand for agricultural commodities, and not least to feed the rapidly growing world population. They therefore frame LSLA as a development opportunity.

Operation of land deals: roughly half of the deals concluded are operational (54 per cent of 399 deals), but only 11 per cent of the area under contract in these deals is cultivated (Land Matrix dataset from July 2019). Land and water speculation explains part of this phenomenon. Further reasons for low realisation by investors include a lack of reliable information on the production potential of the acquired land, border conflicts with neighbouring LSLA farms or smallholders, difficulties regarding the provision of agricultural inputs, investors’ capital restrictions and insecurity about the long-term validity of the land deal.

Food production: a large proportion of crops cultivated on LSLA farms is for non-food purposes. Thus, the shift from smallholder farms to LSLAs often results in an effective loss of food production relative to the food-non-food production ratios of small-scale farmers. Claims that LSLAs are a way of improving food security in the host countries should therefore be taken with caution.

Yields: despite the common argument that LSLA farms could help to close the yield gap, the evidence available does not support the assumption that LSLA farms are generally able to obtain higher yields per unit area than smallholder farms even though they usually apply higher amounts of external inputs. Some studies even showed that under the same agro-ecological conditions, larger farms generally achieve lower productivity per hectare than smaller farms.

Access to land: the loss of access to land and natural resources is found to be the most important negative effect of LSLAs on local people. Free, prior and informed consent is generally lacking. Customary land is often permanently converted, leading to definitive land loss for small-scale farmers, pastoralists, and local communities including common land.

Discharge of labour: in a study modelling LSLA impacts in five African countries, a net employment effect of between -22 and -74 per cent for the acquired land was calculated. According to the study, the discharge of labour is, therefore, high in the immediate vicinity of the LSLA, but comparably small in relation to total national employment in agriculture.

You can download the study What are the effects of large-scale land acquisitions in Africa on selected economic and social indicators? from the Misereor website