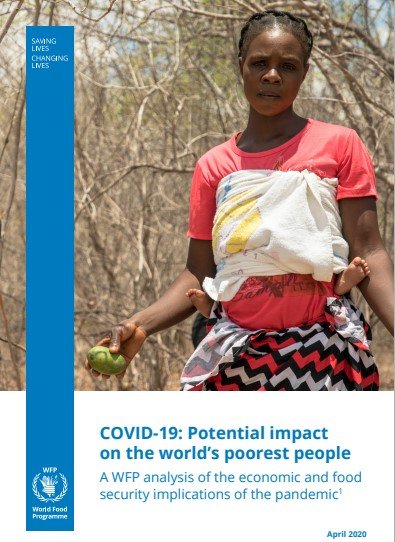 According to a recently published report by the World Food Program (WFP), more than 821 million people regularly go to bed hungry, over 100 million of whom suffer from acute hunger, largely because of anthropogenic conflicts, climate change and economic downturns.

The report COVID-19: Potential impact on the world’s poorest people: A WFP analysis of the economic and food security implications of the pandemic notes that these “are the people who will experience the unthinkable due to the economic or logistical consequences of the COVID-19 pandemic”. Moreover, it predicts a world-wide increase in the depth and breadth of hunger.

Published in April, the study seeks to identify which countries and which groups of people would be most affected by COVID-19. Countries which heavily relied on the import of fuel and food, especially the land-locked ones, appear to have been particularly vulnerable. Furthermore, the pandemic has had a severe effect on countries dependent on tourism, exports of raw materials or remittances.

The study points out that COVID-19 has affected rich and poor countries very differently, although it stresses the links provided by globalisation and humanity as such. It sees the availability of affordable testing and treatment as “the only real hope for many”. But it stresses that until then, ensuring that tens of millions of people already on the verge of starvation do not succumb to this virus or to its economic consequences remains a vital issue.

Which countries are at risk?

This analysis suggests that, for many poor countries, the economic consequences will be more devastating than the disease itself. Thus, to identify those at risk the researchers use the economic pillar of the Proteus food security index combined with export dependency for primary commodities (fuels, ores and metals). There are almost 212 million chronically food-insecure and 95 million acutely food-insecure people in these countries. Most of them countries are in Africa, including highly export-dependent Angola, Nigeria and Chad, and highly import-dependent Somalia and South Sudan. Another region of concern is the Middle East, with countries such as Yemen, Iran, Iraq, Lebanon and Syria all facing severe economic problems.

The report perceives that COVID-19 is already unfolding from a global health into an economic emergency and could further unravel into a food security emergency if supply chain disruptions lead to panic buying and anxiety starts to rule global food trade.