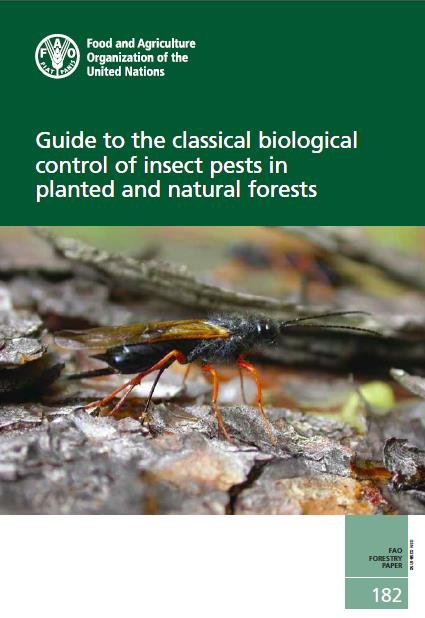 A guide on how to tackle invasive insects in forests was published by the Food and Agriculture Organization of the United Nations (FAO) in April 2019. The Guide to the classical biological control of insect pests in planted and natural forests distils information to assist forest managers in developing countries in developing effective pest-control programmes. It offers a host of case studies ranging from the coconut rhinoceros beetle, the great spruce bark beetle, the Orthezia bug and several pathogens that are increasingly impacting eucalyptus trees.

Insect pests damage around 35 million hectares of forest each year, with particularly catastrophic impacts recorded when non-native species arrive in ecosystems where they have no natural enemies. The scale of impact is increasing with growing international trade and the effects of climate change.

Over the last decades, the global community has accumulated considerable knowledge on the application of biological pest control. The introduction of natural enemies of invasive species from their country of origin has proven an effective tool to combat pest expansion.

For example, introducing Torymus sinensis, a parasitoid specific to the Asian chestnut gall wasp in China - which spread over Europe and decreased wood yields by 40 per cent and nut yields by over 80 per cent - proved effective, spreading on its own and killing more than three-quarters of the targeted galls, while leaving other native wasps alone.

Two introduced parasitoids to the European winter moth - which during the early 20th century went on to ravage North America's oak forests and cherry and apple orchards with tree mortality rates as high as 40 per cent - have collaborated to contain the pest, one particularly effective during outbreaks and the other a persistent predator at lower densities.

Classical biological control does not eradicate an invasive pest species, but works to establish a permanent, self-sustaining population of natural enemies that will disperse and suppress a pest population or reduce the speed at which it spreads. When successful, it enables reductions in the use of insecticides, with corollary benefits for human and environmental health.

More information and download the Guide to the classical biological control of insect pests in planted and natural forests:www.fao.org/documents/card/en/c/CA3677EN