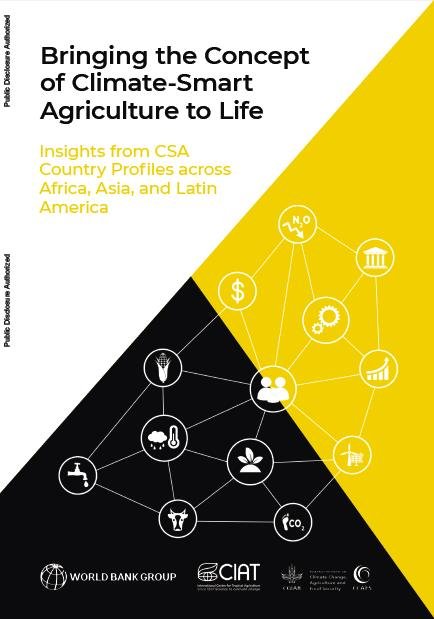 Bringing the concept of climate-smart agriculture to life

This study published by the World Bank and CIAT charts strengths, weaknesses and barriers to adoption of climate-smart agriculture in an effort to unlock investment.

The report Bringing the concept of climate smart agriculture to life launched by the International Center for Tropical Agriculture (CIAT) and the World Bank in December 2018 analyses efforts to transform farming through climate-smart agriculture in 33 countries to guide future investment and build resilience for the world’s 500 million smallholder farmers vulnerable to climate change.

The report is a comprehensive analysis of climate-smart agriculture (CSA), listing the top 10 insights into its implementation that scientists have gathered from countries in Africa, Asia and Latin America during five years of research. More than 1,500 experts categorise and rate the “smartness” of dozens of CSA interventions, as well as identifying key barriers to adoption and opportunities for scaling up.

Some 1,700 CSA combinations were evaluated in the report but just five technology clusters account for 50 per cent of all CSA technologies identified: water management, crop tolerance to stress, intercropping, organic fertilization and pest control, and conservation agriculture.

Other major findings of the report include:

• Technologies considered climate smart vary from region to region. The “smartest” techniques by region are silvopasture, intercropping and biogas harnessing in Latin America and the Caribbean, Africa and Asia, respectively.
• The implementation of CSA almost always leads to increased profitability on smallholder farms
• Most CSA techniques are “triple-win” scenarios; meaning they increase production, demonstrate adaptation to the effects of climate change and mitigate agriculture’s climate impact. Five technology clusters were ranked in the top 10 for climate-smartness in all three clusters: tree management, improved pastures, silvopasture, conservation agriculture and water management
• Training and information for farmers were found to be the biggest obstacles to CSA adoption across all regions, affecting almost 90 percent of CSA interventions.
• There is no CSA silver bullet. Interventions need to be tailored to the individual plot.

The report found that silvopastoral farming and conservation agriculture are the top two systems in climate “smartness” globally.

The global CSA synthesis draws from 33 CSA Country Profiles created by scientists from CIAT and the CGIAR Research Program on Climate Change, Agriculture and Food Security (CCAFS) since 2014 with the support of the World Bank, USAID, the United Kingdom, and national governments where the profiles were made.