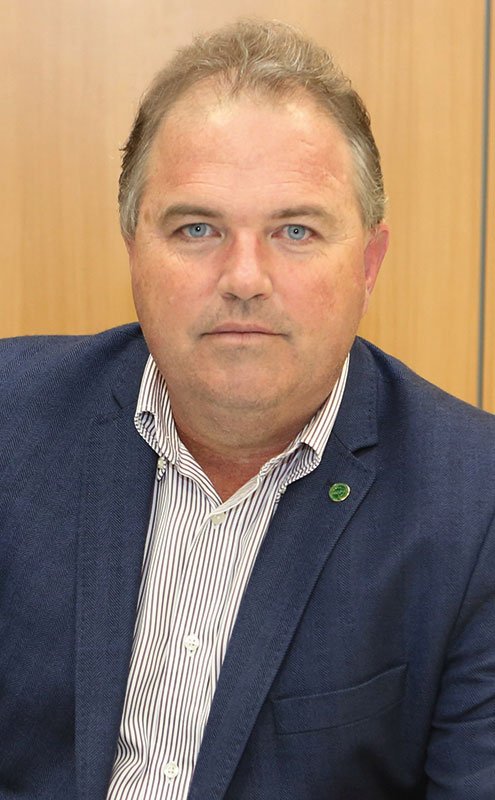 "We are helping family farms to adapt to climate change"

More than 40 per cent of soils in Latin America and the Caribbean are classified as degraded. Fernando Schwanke describes how the Inter-American Institute for Cooperation on Agriculture (IICA) is supporting governments at the interface of climate change and sustainable land use and the role of family farming in rural transformation.

Mr Schwanke, in late 2021, the international initiative “Living Soils of the Americas”, which is backed by the IICA, was officially launched. What does it incorporate?

Schwanke: “Living Soils of the Americas” was initiated in December 2020 by the IICA together with the Carbon Management and Sequestration Center, or C-MASC for short, of Ohio State University, USA. Its overarching goal is to enable recovering the quality of this natural resource in order to facilitate the transformation of our agricultural and food systems, taking the One Health Approach into consideration. World Food Prize Laureate Rattan Lal, who heads C-MASC and is assisting us with the programme, sums things up appropriately: restoring soil health is a crucial element of combating poverty, enhancing biodiversity and reducing greenhouse gas emissions, the cause of climate change. World-wide, more than a third of all soils are degraded to a certain extent. In Latin America and the Caribbean, this share has even reached more than 40 per cent. So restoring our soils is of fundamental importance to regional and global food security. And here, the multi-institutional initiative, in which both the public and the private sector are involved, is to help with concrete projects as well as awareness-raising regarding the problem of soil degradation.

What is the IICA doing in this area?

Schwanke: It is the IICA’s mission to promote rural development and the wellbeing of the rural population in Latin America and the Caribbean. Here, it has to be borne in mind that the Institute is governed by the Inter-American Board of Agriculture, which consists of the 34 associated governments. So our work is guided by the requirements of the ministers of agriculture in these countries and is closely linked to the governments there.

How does soil conservation figure in this context?

Schwanke: Soils are a key component of food and climate security and therefore also play a major role in IICA activities. Last year, we conducted a number of high-ranking events addressing this topic. In addition, we have compiled various publications with international contributions in which we demonstrate the impacts of introducing good agricultural practices on soil changes. This is very important in helping the countries to prepare and implement corresponding measures.

Another aspect of soil conservation and sustainable land use is that of globally boosting the position of Latin America and the Caribbean as one of the most important regions for producing and exporting food. After all, 30 per cent of all food exported comes from Latin America. Improving soil quality is also crucial to food and nutrition security world-wide. For example, countries such as Argentina and Brazil could raise their wheat production, which currently, with view to consequences of the pandemic and the war in Ukraine, would be of considerable importance. Moreover, soils rich in nutrients contribute to mitigating the harmful impacts of climate change. The IICA is very intensively working on this topic.

Schwanke: In the context of our programme “Climate change, natural resources and risk management”, we have carried out numerous measures in close collaboration with the countries, ranging from promoting more active and more qualified participation of the agricultural sector, through publications, webinars, workshops and virtual training, consulting and guidance, supporting the preparation of proposals, to inter-departmental dialogues. In June, for example, the IICA supported a meeting of ministers in which a common standpoint of the ministers of agriculture of the Americas and the Caribbean for COP 27 was discussed.

And at field level?

Schwanke: What is exciting here is, for example, a project on Sustainable Rice Intensification in Ecuador which aims at enhancing productivity and resilience in rice cultivation through modified plant, soil, water and nutrient management while reducing the employment of external inputs. In the context of our climate programme, cattle farming and rice cultivation are of particular importance since these are the biggest sources of methane emission. In Mexico, for example, we are developing a low-emissions and sustainable livestock project with the aid of which greenhouse gas emissions are to be reduced by 28 per cent. This is intended to enhance the productivity and competitiveness of the livestock sector in the context of a value chain based on productivity, sustainability, inclusion and a territorial approach.

We are also developing a knowledge management approach supporting family farms in adapting to climate change. The aim here is to boost the capacity of family farm members in semi-arid areas and mountain range systems who currently bear only a low level of resilience to the impacts of climate change. This is meant to enable them to actively participate in the rural transformation processes in Latin America and the Caribbean – through the implementation of practices tailored to locations in regions with similar biophysical and socioeconomic conditions. Bolivia, Brazil, Colombia, Ecuador, Honduras, Guatemala, Mexico and the Dominican Republic are involved in this project.

Are there pioneering countries in the field of sustainable land use?

Schwanke: There are many tried-and-tested examples of sustainable land management in the region. Here, for example, systems featuring the integration of agricultural livestock and forest management can be referred to in Brazil. The catchword in this context is zero carbon beef. And then there is sustainable coffee growing in Central America, for instance in Costa Rica and Guatemala. Costa Rica’s implementation of its policy on payment for ecosystem services is also very interesting for other countries. But there are numerous other examples as well.

Until recently, you were Head of Department for Family Farming and Cooperatives at Brazil’s Ministry of Agriculture. How is the Ministry supporting family farms with regard to sustainable production?

Schwanke: First of all, it is important to point out that nearly 80 per cent of Brazilian farmers are family farmers. They manage 3.9 million farms and account for 30 per cent of Brazilian agricultural production, which boasts considerable diversity. It has become apparent that if these family farmers are integrated in a private enterprise or a cooperative, they are technologically far more advanced than farms which are not integrated, also regarding soil conservation. Moreover, cooperatives facilitate market access for smallholders. Production chains such as coffee, vegetables, fruit, milk, pork, poultry and tobacco are mainly maintained by family farms with very sustainable production methods.

Restoring our soils is of fundamental importance to regional and global food security.

Brazil supports family farms in three ways: through an extensive credit  programme which awarded eight billion US dollars worth of credits for family farms at interest rates of between three  and four per cent per annum in 2021, through technical support, which is especially important for non-integrated farmers, and through public policies for marketing which above all comprise buying food from family farms for the national school meals programme and the food procurement programme for poor households.

Are there special support programmes with a focus on sustainability issues?

Schwanke: This is starting now. For example, there is a certification scheme for integrated production supported by the Ministry of Agriculture. The tobacco sector has accepted this certification and implemented it among about 25,000 producers. We are also witnessing this development in the coffee sector, as well as in all other export crops. This is a result of pressure exerted by customers on the international markets, who have been calling for sustainable production. The internal market is not so sophisticated, so that the corresponding value chains have not yet reached such a level.

Which markets is Brazil mainly supplying?

Schwanke: Today, most of Brazil’s products go to Asia, but Europe used to be our largest market. And it is still true that Europe sets the course, for example in terms of sustainability. This is what makes international exchange, for example with Germany’s Ministry of Agriculture, so important in our work. In Brazil, for instance, enormous developments have become apparent over the last 20-30 years. I know people whose parents had a 30-hectare farm in the South of the country, where many immigrants have settled, and where I live too. Today, these farmers grow 80,000 hectares of soy in the Mato Grosso region. Now pressure is mounting to stop such trends.

You yourself are a forestry engineer. How has knowledge on sustainable land management changed since your studies?

Schwanke: I can still remember well that when I was studying in the 1980s, the rivers would become red when there was heavy rainfall because so much soil had been washed into them. The cultivation system was conventional. In other words, soil was ploughed and tilled several times, exposing it to rain, and hence to erosion. Since the 1990s, Brazil has drastically changed its mode of production, opting for no-tillage. This technology was pioneered by Herbert Bartz, a son of German immigrants who introduced it in 1972 on his 180-hectare farm. This figure was to rise to 35 million hectares by 2020. According to the Brazilian research corporation Embrapa, unprotected soil can lose up to 29 tonnes of its content per hectare and year. Just imagine Brazil not having introduced direct seed. Then the country would be losing a billion tonnes of soil each year.

About the IICA
The Inter-American Institute for Cooperation on Agriculture (IICA) was founded in 1942 and is seated in San José, Costa Rica. It is the specialised agency for agriculture of the Inter-American System and has 34 member states, 18 observer countries (including Germany) and one associated country (Spain). IICA fields of activity include technology and innovation for agriculture, agricultural health, food safety and quality, international agricultural trade, family farming, rural development, natural resource management and the bioeconomy. More information: https://www.iica.int/en

Fernando Henrique Kohlmann Schwanke is Project Director of the Inter-American Institute for Cooperation on Agriculture (IICA). A qualified forestry engineer, he was Head of Department for Family Farming and Cooperatives at the Brazilian Ministry of Agriculture from 2019 to 2021. Fernando Schwanke grew up in Brazil as a son of German immigrants.
Contact: fernando.schwanke(at)iica.int