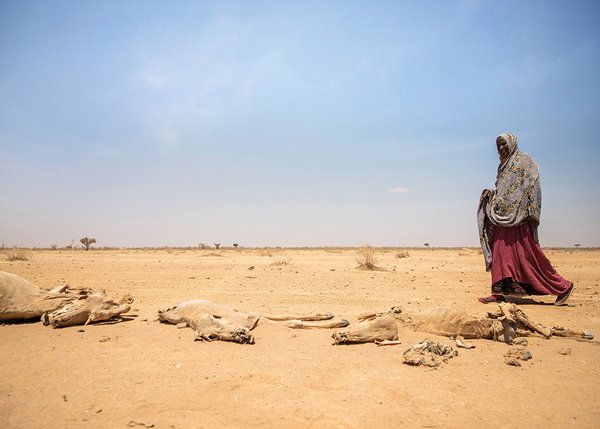 Withstanding droughts requires reserves of water, cash or food to be available to vulnerable groups to survive the exceptional anomalous periods when nature cannot provide them.
Photo: Michael Tewelde/ FAO

Assessing the effectiveness of multilateral funds in coping with drought

Creating resilient food systems for people vulnerable to droughts calls for solutions triggering transformation. A number of multilateral funds have been established to generate sustainable benefits in this context. Our author looks at what makes interventions supported by such funds effective and to what extent their impact can actually be tracked.

Where land and water management can prevent the escalation of droughts into crises and sustain food production, societies can benefit by investing proactively in these approaches. The design of multilateral funds is usually intended to achieve a catalytic effect enabling developing countries to innovate and reshape the dynamics of their developing economies to favour such investments, instead of creating a situation where sections of the population or countries would remain continuously reliant on hand-outs from emergency drought relief alone. The aim is always to build the self-resilience of systems to avoid or reduce vulnerable people’s need for emergency measures – even if these may still be needed from time to time.

The international community has collectively established a range of multilateral funds that are expected to reduce community and ecosystem vulnerability to droughts and generate sustainable benefits. These funds include the Global Environment Facility (GEF), the Least Developed Countries Fund (LDCF), the Special Climate Change Fund (SCCF), the Adaptation Fund (AF) and the Green Climate Fund (GCF). Others relevant in drought-prone contexts focus on disaster risk reduction and disaster response. Given the enormity of the drought risks and challenges faced in numerous developing countries, and the relatively small size of multilateral funding available, the catalytic transformative approach is necessary. It asserts the power of individuals and societies to work together to achieve changes in the myriad human decisions making up the global economy.

A recent rapid review of effective financing for policy, implementation and partnerships addressing drought risks commissioned by the UN Food and Agriculture Organization (FAO) and the United Nations Convention to Combat Desertification (UNCCD), with GEF support, presented an overview of knowledge and thinking concerning the effectiveness of a range of multilateral funds and other sources of financing for transforming drought risks. The rapid review focused on three distinct layers of financing to address drought risks: disaster risk finance, climate finance and green or environmental finance. Each of these strikes a different balance between objectives for long-term sustainability versus the achievement of immediate and direct benefits to vulnerable communities.

What are resilient food systems in drought-prone contexts?

Withstanding droughts requires reserves of water, cash or food to be available to vulnerable groups to survive the exceptional anomalous periods when nature cannot provide them. Sustaining access to these services for the rest of the time depends on maintaining well-adapted practices balancing the needs of nature and human populations. Transhumant systems traditionally enable vulnerable people to access water and food reserves by migrating across wide areas and establishing reciprocal agreements with other groups that help them to avoid placing too much pressure on resources in any one area. Societies also supplement and buffer their food systems to cope with droughts in populated locations by stocking, trading and importing foods and other commodities so that they will be less likely to suffer losses or require emergency assistance.

Becoming more self-resilient to droughts requires societies to continue to integrate and innovate their resource management systems to build water and food reserves in the more vulnerable regions so that none of these should be over-depleted when droughts reoccur. Since water and food prices rocket during droughts, and many sectors grow slowly, sustainably managing the reserves and cycles of all of these resources is critical to avoid negative effects on local, national or global economies. Investing at the systemic level to build sustainability and resilience to future droughts takes time and requires cooperation. The payoffs should benefit more people for a longer period than emergency relief alone will do.

The rapid review identified a series of examples of initiatives supported through the multilateral funds that involve scaling up drought-resilient sustainable agriculture, and understanding how they may work with wider food systems and processes (also see Box on page 26). This can be combined with the provision of infrastructure, insurance, credit or revolving funds at community level or through knowledge exchange, training and extension systems sharing technical support and other interventions to build human capabilities and institutions’ capacities. Where vulnerable people receive sufficient assistance to enable sustainable and drought-resilient production, they will be more able to maintain their own future production and relationships with wider food systems (e.g. through trade, etc.). Such sustainability-oriented approaches help to make more funds more directly available to vulnerable people for a longer period of time. 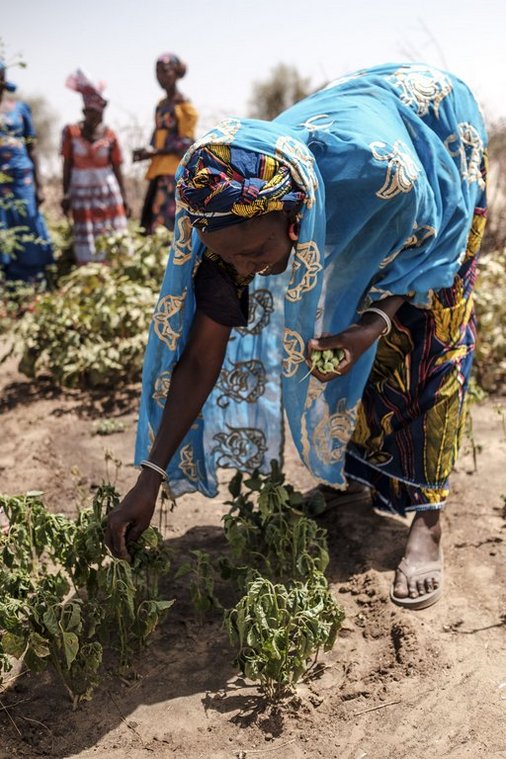 What results can we observe as long-term effects on food security?

The more recent projects now underway at each of the multilateral funds apply their common results frameworks, and most projects use these to produce progress reports annually that the funds are able to publish on their websites. Terminal evaluations of projects take stock of the results achieved by each project and discuss contextual issues and lessons. These are necessarily not forward-looking, so they cannot track the catalytic effects that the projects would have for sustaining access to food, water and livelihoods following project completion and generate learning at this level.

The Adaptation Fund results framework and its common set of quantitative indicators were put in place in 2019. They are to enable an aggregated presentation of common results across the portfolio using standardised indicators to show reduced losses of assets, including crops and livestock. Pending this, the evaluations from individual projects already completed describe results using different indicators of effects on food security and other parameters (see examples in the Box).

The GCF began approving projects in 2015. Due to its early stage of implementation and project timeframes of five or more years, none of the GCF projects was yet completed at the time of the FAO review, so no terminal evaluations were yet available. However, annual progress reports of the GCF for 2020 already showed that some projects (see Box) were using a standardised indicator introduced through the GCF results framework (supplementary indicator 2.2: beneficiaries [female/male] with improved food security – unit: number of individuals) to capture benefits in terms of effects on the food security of individual beneficiaries (disaggregated by gender). This was in addition to indicators capturing reduced loss of crops and other assets, effects on production, sustainable land management practices and effects on the environment.

For the time being, no common approach to defining, predicting and tracking the scale of future catalytic effects expected beyond the project timeframes is in use at the multilateral funds. These would rather have to be defined within the national planning frameworks and target-setting of the global conventions that they serve.

Advancing food security amongst the most vulnerable is a necessary prerequisite for the multilateral funds to achieve their catalytic objectives, especially in the least developed countries (LDCs.) But measuring their effects on beneficiaries’ food security during and immediately after project completion does not capture the extent to which they are able to scale up the intended catalytic effects or sustain them over time, let alone achieve transformative systemic changes affecting economies and ecosystems. Even though early indications from the rapid review suggest that the multilateral funds and policy processes are squaring up to the challenge, considerable evaluation challenges remain.

International strategic processes guiding and enabling the introduction of results frameworks are needed to identify the extent to which drought effects on the immediate food security of vulnerable people and the ecosystems needed to sustain it are being reduced by multilateral financing. As yet, there is no coherent global system to generate an overview of progress and gaps at global level, nor to orient public policies and learning processes within the countries affected by drought. The FAO rapid review began to bring together insights from the current available systems for targeting and tracking financing to address drought risks through the three layers of actions, target indicators and evidence systems. It is also proposing that more could be done, and providing some starting points for the global policy processes under the Rio Conventions to mandate it.

AF project evaluations reported a total 3,591 families of family agriculture producers, as well as 2,488 additional beneficiaries in 19 rural farming schools, one childcare provider, and one community centre benefitting from a project on “Family Agriculture Adaptation and Resilience in Northeast Argentina to Climate Change and Variability” (2013–2018; 5.64 mill. USD). Before adapting agricultural practices to cope with water deficits during droughts, the project had to address challenges faced by many families to secure access to water for their domestic needs. This was done by retrofitting roofs and construction of associated cisterns or water wells as reservoirs for harvesting rain water, as well as the execution of works in public institutions such as rural schools and childcare providers. Both reliance on self-construction of infrastructure by the producers and improving on-farm land and water management practices built in sustainability. The project also pioneered the design of the first ever insurance policy for small-scale horticultural producers in Argentina.

AF in Uzbekistan
The project entitled “Developing climate resilience of farming communities in the drought-prone parts of Uzbekistan” (2014–2020; approx. 5.415 mill. USD) reached 47,979 beneficiaries in Karakalpakstan who received information about the adaptation measures that can be implemented at landscape level, and increased their knowledge of climate-resilient farming through 25 trainings, seminars and conferences. Activities involved monitoring climatic conditions and river flows, establishing three extension service centres, establishing two rural-community based associations bringing together 12,240 people in Kanlykul and Kegeyli project pilot districts to restore degraded pastures and forestlands (780 ha), and providing land laser levelling equipment to improve irrigated agricultural land (460 ha). Agro conservation and water-saving technologies were tested on 22 hectares of farmlands, and landscape level adaptation activities were implemented on over 80 hectares.

Caroline King-Okumu is a specialist in the design and evaluation of support for nature-based solutions who works collaboratively with partners in marginal and drought-prone areas.
Contact: carok(at)thebordersinstitute.org

Maher Salman is a Senior Land and Water Officer and a Team Lead of the Agricultural Water Management Group at the Land and Water division of UN’s Food and Agriculture Organization (FAO) in Rome, Italy. He also acts as the focal point for drought and as the coordinator of Adaptation Fund at FAO.

The views expressed in this publication are those of the authors and do not necessarily reflect the views of the Food and Agriculture Organization of the United Nations.