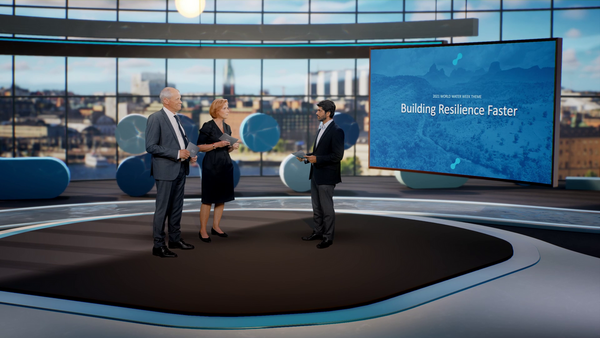 World Water Week – the role of water in the climate crisis

World Water Week 2021 sheds a light on the crucial role of water for reaching the climate targets and achieving the Sustainable Development Goals.

Focusing on the topic Building Resilience Faster, this year’s World Water Week opened with calls for massive transformations of our societies. Organised by the Stockholm International Water Institute (SIWI), it takes place as an online event from the 23rd-27th August 2021.

The World Water Week 2021 seminars focus on the role of water, recognising that the climate crisis is indeed a water crisis, and on turning climate risks into engagement. As the value of water is recognised as the connector across the Sustainable Development Goals (SDGs), the organisers aim to look beyond the water community to involve climate actors from all communities, and link discussions, solutions and initiatives to other international water and climate-related events and processes.

“Collaboration across borders is more important than ever. In the coming decade, all sectors of society need to undergo massive transformations,” explained Executive Director Torgny Holmgren of SIWI, stressing the crucial role of water for these transformations and for reaching the climate targets and achieving the Sustainable Development Goals.

In his keynote, Professor Johan Rockström from the Potsdam Institute for Climate Impact Research, described how humans were dangerously altering Earth’s life support systems. One example of this is how freshwater is impacted by the change humans are causing in climate and biodiversity. Rockström and his team have identified freshwater as one of the nine planetary boundaries, which should not be crossed.

“Freshwater must be integrated within the climate agenda,” Rockström said. “We must first meet the Sustainable Development Goals by 2030, but then transform towards a safer future within planetary boundaries.”

Forests and trees play a vital role in meeting the world's increasing demand for water and need to be managed for water-related ecosystem services, according to A Guide to Forest-Water Management, which was launched at World Water Week. The Guide was co-published by the UN's Food and Agriculture Organization (FAO), the International Union of Forest Research Organizations (IUFRO), the Joint Research Centre of the European Commission, the United States Forest Service and partners.

The forest and water connection is essential to achieving the 2030 Agenda for Sustainable Development, especially Goals 6 (Clean Water and Sanitation), 14 (Life below Water), 15 (Life on Land) and 13 (Climate Action).

"Water security is a significant global challenge, with repercussions for agriculture, energy production, people's basic needs and our supporting ecosystems," said FAO Deputy Director-General Maria Helena Semedo. "The twin challenges of climate change and a growing population are increasing pressure on our ecosystems. We need to recognise that forests play a key role in water security and prioritise water in forest management and governance decisions."

Focusing on rainfed agriculture in Africa

Rainfed agriculture must be enhanced to better support livelihoods and boost food security in the African context. Approaches should target green water and enhanced rainfed agriculture, the participants urged. Even if the land sizes of single farms are small, the cumulative impact of millions of farmers makes them frontline water managers. Through their practices, they can reduce soil erosion and increase infiltration of rainfall, in turn recharging groundwater and reducing sedimentation of surface water bodies.