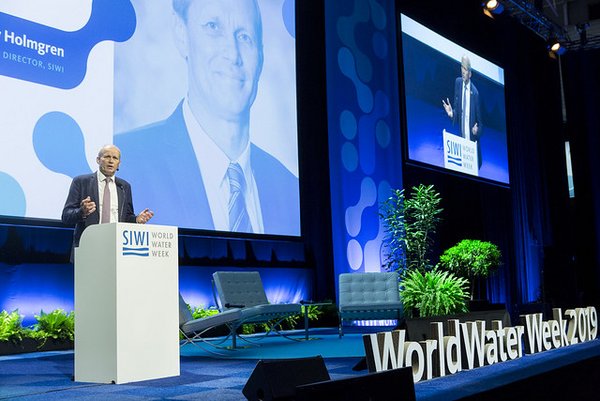 World Water Week: A call for action on water equality

Humanity can only tackle today’s major challenges if access to water is distributed more fairly. Speakers at the World Water Week called for a drastic shift in how water is shared and managed.

Water for Society: Including all – was the theme of this year’s World Water Week held from 25-30 August 2019 in Stockholm, Sweden. The conference was organised by the Stockholm International Water Institute (SIWI) and has been held for 29 years. A third of the 4,000 participants from 138 countries at the event, discussing water-based solutions to counter the water crisis and global warming, were under the age of 35.

In his welcoming address, SIWI’s Executive Director Torgny Holmgren stressed the importance of using water to solve global challenges. “Many in our societies are not aware of the vital role that water plays in realising prosperity, eradicating poverty and tackling the climate crisis. Together, we can change that perception and unlock the potential of water-related solutions,” Holmgren said.

Peter Eriksson, Minister for International Development Cooperation of the Government of Sweden, also advocated for better water governance and warned that with current trends, 52 per cent of the world’s population and 40 per cent of global grain production could be put at risk by 2051, adding: “Poor and marginalised populations will be disproportionately affected, which will further worsen the rising inequalities.”

While the international water sector met in Stockholm for its annual conference during World Water Week, the World Health Organization (WHO) and UN-Water sounded alarm for an urgent increase in investment in strong drinking-water and sanitation systems. The call is triggered by a new report published by WHO on behalf of UN-Water revealing that weak government systems and a lack of human resources and funds are jeopardising the delivery of water and sanitation services in the world’s poorest countries – and undermining efforts to ensure health for all.

The UN-Water Global Assessment and Analysis of Sanitation and Drinking-Water 2019 (known as the GLAAS report) shows that in an overwhelming majority of countries, the implementation of water, sanitation and hygiene policies and plans is constrained by inadequate human and financial resources. Nineteen countries and one territory reported a funding gap of more than 60 per cent between identified needs and available funding. Less than 15 per cent of countries have the financial or human resources needed to implement their plans.

During an African Focus Session organised by the African Union Commission and AMCOW (African Ministers’ Council on Water) at the World Water Week, African Water Ministers and several NGOs launched a proposal for a Marshall Plan for Water in Africa for the next decade, to guarantee all Africans have clean water and safe sanitation in 2030. Total investments are 40 billion USD per year, 50 per cent to be financed by African governments and consumers, the other half by donors, banks and private companies, including climate adaptation funds.

After the meeting, it was proposed that AMCOW and the African Union have to take the lead in drafting the Marshall Plan for Water, and to publish sector finance plans for the next decade by African governments, utilities and consumers (paying tariffs), capitalising up to 20 billion USD per year. The Marshall Plan for Water needs to indicate also how other actors can contribute to finance the remaining 20 billion USD per year, in addition to existing ODA support.

The water plan fits in a broader Marshall Plan with Africa, proposed by the German Federal Minister for Economic Development, Gerd Müller, to create jobs, economic growth and rule of law. The plan will be discussed in 2020 in the EU.