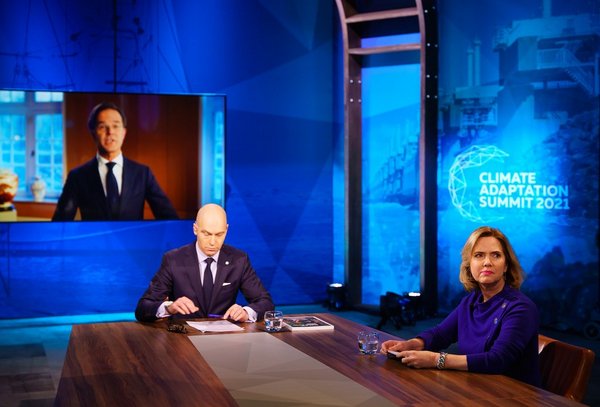 Time for action on adaptation

A wide range of politicians, international organisations and civil society representatives discussed future steps in coping with climate change at the Climate Adaptation Summit 2021, organised by the Dutch Government as an online event.

Hosted by The Netherlands, the Climate Adaptation Summit (CAS) in January 2021 brought together more than 30 world leaders, 50 ministers and 50 international organisations as well as private sector, civil society and youth representatives to discuss action towards a climate-resilient future in 2030. The online event featured input from 300 speakers and was attended by more than 18,500 participants.

One of its key outcomes is the Adaptation Action Agenda, meant to serve as a guide to accelerate adaptation action over the coming years. Again and again, speakers stressed the need to invest in adaptation, which, it was argued, would clearly pay its way in economic terms. Agriculture and food played a key role at CAS 2021, and are focused by several of the Adaptation Action Agenda’s initiatives.

Noting that CAS 2021 was the first global summit focused exclusively on climate change, Netherlands Premier Mark Rutte warned that without adaptation, global warming would have disastrous consequences regarding aspects such as agricultural yield. “Today is about action,” Rutte remarked, emphasising the wide range of participants at the event.

Citing “Adapt Now”, the flagship report of the Global Center on Adaptation (GCA), he referred to the returns of investing in adaptation in terms of climate safety, resilience, innovation, economic growth and protection of ecosystems. An investment of 1.8 trillion USD to scale up climate adaptation over a decade could yield 7.1 trillion dollars in net benefits. Rutte explained that the Dutch government was matching its support for mitigation with that for adaptation. The GCA is an international organisation “working as a solutions broker to accelerate action and support for adaptation solutions” which is hosted by The Netherlands in Rotterdam.

CGIAR, the world’s largest agricultural research partnership, is now embarking on a new ten-year strategy incorporating all of its work including and addressing the climate crisis, which according to the organisation’s Managing Director, Research and Delivery Impact, Claudia Sadoff, is “at the forefront of threats to our ability to provide proper nutrition for all people while staying within environmental limits”. Much of CGIAR’s work involves small-scale farmers, fishers and pastoralists. “These groups provide more than half of the world’s food. Yet most are terribly underprepared to adapt to the impacts of climate change, including droughts and floods, extreme temperatures as well as pests and disease,” Sadoff said at the Summit. “And it’s estimated they receive only 1.7 per cent of all climate finance.”

Food and agriculture high on the Agenda

Initiatives from over 50 partners were presented at the event, with food and agriculture playing a prominent role. The International Fund for Agricultural Development (IFAD) announced the launch of a new umbrella fund, the Rural Resilience Programme (2RP) to contribute to the Adaptation Action Agenda, containing the enhanced Adaptation for Smallholder Agriculture Program (ASAP+) as its key pillar, at CAS 2021. This new climate-financing mechanism aims to mobilise 500 million USD to benefit more than ten million people, e.g. by reducing climate change threats to food security, helping to mitigate and sequester carbon, increasing the resilience of small-scale farmers and also helping make existing climate finance more available to small-scale producers.

An Investment Blueprint for Climate-Informed Digital Advisory Services was put on the Agenda to help scale the provision of climate information to 100 million smallholder families using digital technologies. This initiative was launched by the World Food Programme, the World Resources Institute, the World Business Council on Sustainable Development, the Global Center on Adaptation and Columbia University/International Research Institute for Climate and Society.

Africa Improved Foods (AIF) is a public private partnership between the Government of Rwanda, the Dutch multinational health, nutrition and materials corporation Royal DSM, the Dutch Entrepreneurial Development Bank (FMO) and a number of other partners. It provides scalable and sustainable solutions to malnutrition via local production of highly nutritious foods, and has so far invested 65 million USD in technology in Rwanda. At the Summit, Royal DSM and AIF, together with the governments of Ethiopia and Kenya, announced the launch of AIF 2.0, which is to expand operations to a further ten African countries by 2030. The aim is to “provide climate-resilient and financially rewarding value chains for over two million smallholder farmers, enhancing the nutrition for more than 100 million consumers and driving one billion USD of private sector investment” as another of the initiatives presented by more than 50 participants of the Summit and forming the Decade of Action which the new Adaptation Action Agenda is to guide.