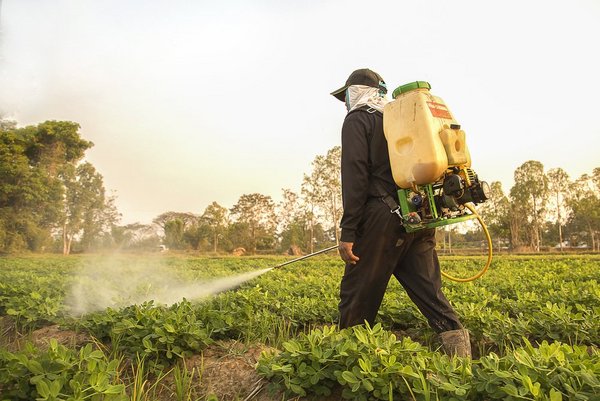 The use of pesticides in developing countries

Pesticides which are banned in the EU are still being exported to countries outside the EU, and often there is a lack of adequate information and transparency. A new EU study provides an overview of the situation.

In January 2021, scientists at a public hearing presented their study on the use of pesticides in developing and emerging countries, commissioned by the European Parliament’s Development Committee.

The official number of environmental contaminations by pesticides between 2007-2014 is shown as 25,000. But according to Juliana Dias Bernardes Gil, one of the authors of the study, the estimated number of unreported cases is significantly greater. The pesticides are used incorrectly and applied in excessive amounts. Effective controls are found primarily in large farms; the smaller farms – if they use pesticides – are dependent on dealers who offer undefined mixtures and do not state clearly when and on which crops they should be used. This is why pesticides for grains are now also found in wood products and vegetables.

Interrelationships between pesticides and food

One frequent argument why pesticides not allowed in the EU should be sold to non-EU countries is that the climatic conditions in other countries do not justify a local ban. Moreover, the issue of food security is also emphasised.

However, subsistence farmers living in the most fragile conditions mostly have neither money for nor access to inputs such as pesticides. Their harvests are most exposed to pathogens. If they do gain access to pesticides there is a lack of advisers and opportunities to train them in safe use or offer them non-chemical alternatives.

Study co-author Kees Jansen of Waageningen University emphasised at the hearing that there is a global trend towards reducing chemical pesticides, citing the example of the newly-created pesticide forum in the Côte d’Ivoire. According to his observations, more regional scientists are now researching the effects of rising pesticide use and publishing their data.

Xavier Pavard is the head of the EU group for rural development in Burundi, and is pushing for cooperation between developing and emerging nations and the EU on safer plant protection. The Farm-to-Fork strategy presented in 2020 calls for a reduction in pesticide use and the expansion of  agricultural ecology.

Juliana Gil stressed that the study was not aiming for eliminating pesticides. Exports to the Global South are not just from the EU, and Gil feels a global approach is needed. According to Jansen, the Food and Agriculture Organization of the United Nations (FAO) and the World Health Organization (WHO) have drawn up enough principles for safe use of pesticides. However, there is a lack of local implementation of these, and once a pesticide is approved, no further monitoring takes place.

Export ban on those pesticides not approved in the EU?

An export ban for pesticides banned in the EU seems to be one of the quickest ways to regulate for safe pesticides. Kees Jansen feels that different risk evaluations for moderate and subtropical and tropical climate zones is improbable. He argues that a global export ban could get the EU a reputation in the Global South for safe agricultural production.

Juliana Gil is more cautious and warns of undesired effects: farmers could resort to the black market for pesticides, food prices could rise. A ban would have to be part of a package of measures such as training for alternative methods of production.

The study describes the lack of capacity for on-site advice, research and protective equipment. Older materials from the EU are not re-evaluated toxicologically, risk data are not transparently available for the importing countries, and often they would not know that a pesticide is already banned in the EU. Jansen proposed transferring this data to a public database.

Are things starting to move?

The pesticide Paraquat was a textbook example last year for the export of pesticides banned in the EU. It is used in numerous crops and is claimed to be responsible for half of all chemically-caused deaths in agriculture. Paraquat has been banned in the EU and Switzerland for some time. Brazil was also considering a ban in 2017, and this actually went into force in September 2020 – although only briefly, since approval was extended for the 2020/2021 financial year on 7 October 2020, because of the lack of inexpensive alternatives. According to the study authors, farmers have now laid in stocks of Paraquat.

Rotterdam Convention and PIC
The Rotterdam Convention on international trade in certain hazardous chemicals is the first international treaty on the import and export of chemicals. It covers industrial chemicals as well as crop protection agents and pesticides. 164 states, including Germany, have signed the convention, which intends to be the database Kees Jansen talks about. However, the convention does not prohibit trade entirely, but provides information on the chemicals. This is described as “prior informed consent” (PIC) in the convention.
To be on the list of PIC substances, a chemical, crop protection agent or pesticide must be banned, or its use strictly limited for health or environmental reasons in at least one country in each of two PIC regions. Severely hazardous pesticide formulations (preparations) causing problems in the use conditions in developing and emerging countries can also be included in the PIC procedure.

The EU study: The use of pesticides in developing countries and their impact on health and the right to food