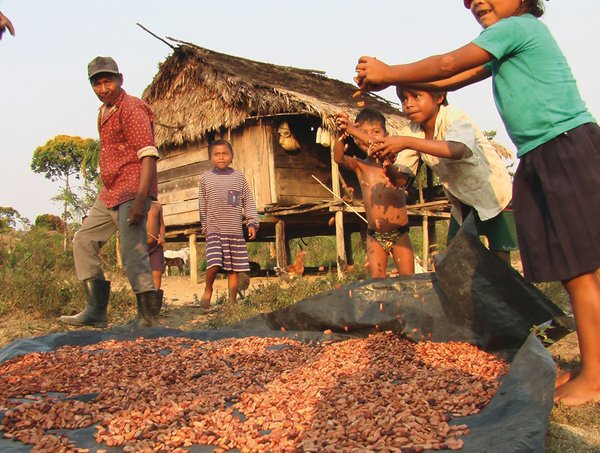 Nearly a quarter of the monetary incentives related to the Socio Bosque Programme was invested in productive activities.
Photo: L. Ringhofer

Striking a balance between forest, climate, and people?

With their public payment schemes, some Latin American countries like Costa Rica or Mexico are well represented in the REDD/REDD+ debate. One of the more recent initiatives is Ecuador’s Socio Bosque programme. Vested with high hopes, this innovative pro-poor conservation initiative seeks to balance environmental efficiency with poverty alleviation. Almost four years after its launch, this article provides some insights.

While Integrated Conservation and Development Projects (ICDP) were exemplar of the 1980s, a paradigm shift in the 1990s paved the way for direct payments for the conservation of ecosystems. The concept of Payment for Ecosystem Services (PES), more targeted and conditional on compliance than most of the earlier integrated approaches, is especially well-known. Two of what are probably the most prominent public payment schemes in Latin America have been Costa Rica’s large-scale FONAFIFO fund, initiated in 1997, and Mexico’s programme of payment for Hydrological Environmental Services of Forests launched in 2003.
FONAFIFO makes direct payments to private landowners through renewable, multi-year contracts in return for forest conservation, reforestation, agro-forestry and natural regeneration management. Mexico’s programme, on the other hand, initially focused only on areas of hydrological importance, but later expanded its target areas to also include areas under deforestation threat. More recently, discussions on public conservation payment schemes have increasingly recognised their potential to balance conservation with poverty alleviation efforts. One such effort has been undertaken by the Ecuadorian government and has so far been hailed as quite a success story: the Socio Bosque Programme launched in 2008.

Socio Bosque, a public payment programme that has grown enormously since its inception in November 2008, has the specific objective to combine ecosystem conservation with poverty alleviation measures. It is part of Ecuador’s national REDD+ strategy that is currently under construction and thus sheds light on possible benefit-sharing mechanisms propagated by REDD+. Its design is fairly straightforward and based on the principles of voluntariness, transparency and participation. It transfers direct economic incentives per hectare of native forest and other ecosystems to individual landowners and local and indigenous communities who voluntarily commit themselves to comply with clearly defined conservation activities. Incentive levels follow a transparent and simple system, as payments are fixed according to the size of the area put under conservation. The highest incentive – 30 US dollars (USD) per hectare and year – is paid for the first 50 hectares of conservation area, and decreases to USD 20 and less per hectare and year with an increase of the area size.
Another crucial element of Socio Bosque is the fixed duration of agreements of 20 years in order to ensure long-term commitment by the participants. After this period and following a thorough evaluation, all contracts can be renewed. Such a clear procedure was also meant to reach the poorest of the poor and trigger the participation of especially indigenous communities who would otherwise probably be left out. Its novelty as compared to previous public payment schemes is the spatial targeting, on the one hand, and the use of social investment plans, on the other hand. The spatial targeting has the advantage of indicating areas with high, medium and low priority, thereby covering the whole national territory. The social investment plans have been designed as a specific tool for tracking poverty alleviation processes. The beneficiaries of the programme need to indicate how they would use the monetary incentives; they are free to choose investments according to their own needs and preferences. To date, the Socio Bosque initiative has formed alliances with conservation and development NGOs, and community-based organisations in order to ensure the highest socio-economic impact for its participants. These partners are active in providing information and preparing documentation for applications, identifying conservation areas, and delivering trainings on participatory decision-making processes.

For those familiar with Ecuador’s political climate, it comes as no surprise that the programme was designed there. With the enactment of the 2008 constitution, Ecuador became the first country in the world to codify the rights of nature, recognising the inalienable rights of ecosystems to exist and flourish. With this framework, which is based on the concept of “buen vivir”, or good living, Ecuador’s current national development plan (Plan Nacional para el Buen Vivir) has the specific goals to decrease the national ecological footprint and reduce poverty, especially in rural areas. And, with a total surface of 26 million hectares, Ecuador still has around ten million hectares of native forests left that generate important ecosystem services. At the same time, the country currently faces one of the highest deforestation rates in South America. The need for (political) action, therefore, triggered a comparatively fast implementation process of the programme: it only took six months from its first design in March 2008 to its official launch through a ministerial agreement in November 2008.

The programme is operated by the national Ministry of Environment, with its headquarters in Quito and several outreach offices all over the country. All costs of the programme are covered by public funds, and the total budget for the first years of operation accounted for USD 8.5 million. As of October 2011, more than 600 agreements had been issued, and many of the community agreements involve indigenous communities such as the Kichwa, Shuar Cofán or Shiwiar. In terms of size, more than 540,000 hectares are now officially enrolled in the programme; this is virtually the same conservation area as that of the FONAFIFO programme in Costa Rica that was launched more than a decade earlier! Various other Latin American countries have since manifested their interest to learn from the Socio Bosque programme as one crucial element to be combined with other activities, such as territorial planning and the strengthening of legal and institutional frameworks, in order to ensure a successful implementation of their own national REDD+ strategy.

What is REDD and REDD+?

Some critics of this programme condemn its rather harsh “carrot-and-stick” approach. Rigorous measures, the defenders of the programme say, must be in place so as to ensure its success. Depending on the severity of non-compliance, the agreement may either be terminated indefinitely or, in case of minor issues of non-compliance, incentives may be reduced or suspended immediately. More so, all these beneficiaries then get “blacklisted”, as all incidents of non-compliance are documented in the publicly available operations manual of Socio Bosque. In case a participant decides to retire before the end of the 20-year agreement, a fraction of the total incentive received so far needs to be paid back. There are also contested views on the monitoring of the agreements. All monitoring should primarily be done through field visits, while aerial photography should additionally help with monitoring the maintenance of conservation areas. Both measures, however, are costly and some of the outreach workers also lack the necessary monitoring skills. It is estimated that less than half of the indigenous Shuar beneficiaries in the tropical humid forest areas have ever met any of the programme staff. Also, Socio Bosque still lacks the design of biological monitoring indicators. These would, however, be important in light of the programme’s interest in measuring ecosystem service improvements.

Towards a pro-poor development path

As a pioneer in putting equal weight on conservation and poverty alleviation, to what extent has the Socio Bosque Programme so far reached a balance between environmental efficiency and social equity?  In order to measure progress in poverty alleviation, data on basic needs are used, which were readily available at the local level. A review of the social investment plans in December 2011 shows that 37 per cent of the monetary incentives were used for investments into basic needs (like housing, health or education), while 23 per cent were invested in productive activities (like agriculture, eco-tourism or community banking), 22 per cent in conservation (like patrolling equipment or demarcation activities), and 18 per cent in the organisational development of the various groups involved. This also indicates a possibility for a multiplier effect that would transcend the direct economic value itself. Now, the next step would be to monitor how these inputs actually contribute to improved human well-being.

Social equity, however, also entails equal access to the programme and a fair distribution of benefits. Access to the programme is provided through the presentation of a formal land title, but some poor people or indigenous groups may not have an official title of their land. Although a large-scale land titling programme is currently being implemented by the government, at the moment, it seems as a rather slow, costly and time consuming process. Also, poor smallholder families may not even have enough land to set aside for conservation. Another obstacle to direct participation in the programme is the fact that reaching the poorest of the poor may be challenging if they live in remote communities that have little or no contact with government institutions. Critical voices also raise the issue of fairness. Although fair distribution is addressed by Socio Bosque through decreasing payments per hectare with increasing size of the conservation area, statistics reveal that on several occasions, the programme has rather benefited larger wealthier landowners.
And what have the ecosystem benefits been so far? While it is still early to monitor the specific benefits for carbon storage, biodiversity conservation and water regulation, a preliminary study of 2010 carried out by the UNEP World Conservation Monitoring Centre provides some positive signals. It indicates that the areas where the programme is already active store over 5 per cent of the country's total biomass, with the first and second priority areas of Socio Bosque jointly storing 62 per cent of the national biomass carbon. The third priority areas of the programme contain about 14 per cent of the national biomass carbon, though with an upward trend.

In summary, it seems that Socio Bosque is more than a simple “marriage of convenience” between forest conservation and people. While critical voices must undeniably be heard and concrete measures taken to ensure inclusive development for all, one cannot deny the programme’s potential for becoming a crucial element in Ecuador’s incentive-based national REDD+ strategy.