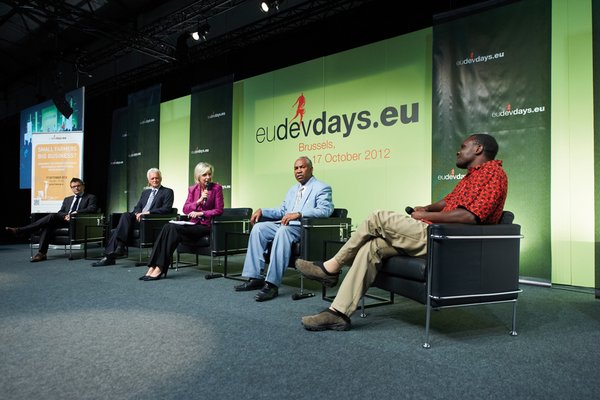 How can smallholders and producers be integrated into local, regional and global value-added chains? What are the opportunities and challenges that cooperation among smallholders and local producers with internationally organised trade chains poses? These questions were at the centre of the High-Level Panel “Small farmers – big business?” at the European Development Days 2012 in Brussels on the 17th October, which was organised by the Practitioners’ Network for European Development Cooperation, the Europe-Africa-Caribbean-Pacific Liaison Committee COLEACP, SNV Netherlands Development Organisation, Deutsche Gesellschaft für Internationale Zusammenarbeit (GIZ) and the United Nations Industrial Development Organization (UNIDO).

Kandeh K. Yumkella, Director-General of UNIDO, stressed the importance of sustainable and fair value-added chains for smallholders. Mohamed Ibn Chambas, Secretary-General of the African, Caribbean and Pacific (ACP) Group of States, noted that only a few years before, private companies had shown no interest in sustainable rural development. Nowadays, this was different. Nevertheless, he criticised the decline in investment in the agricultural sector, particularly in agricultural research and innovation. The private sector had to be involved as a development partner, for this was the only way in which the global goals of food security and poverty reduction could be achieved.

Apollo Owuor of Kenya Horticultural Exporters and Rashid Ally Mamu of Nyemo Investment Company, Tanzania, explained how they were supporting smallholders in fulfilling the rising quality standards in international as well as local markets. It was not only business here and now that counted in this context. Sustainably securing the value-added chain required the social responsibility of entrepreneurs, who had to take the living conditions of smallholder families and farm labourers into consideration in their business decisions.

Stephanie Barrientos, Director of the research programme “Capturing the Gains”, also funded by the United Kingdom’s Department for International Development (DFID), noted that a value-added chain was only as strong as its weakest link. “If the smallholders are not benefiting from it, the chain will break,” she maintained. Thus it was important to avoid women becoming “cheap” labourers, as was the case in the flower trade. Hans-Jürgen Matern, Director of the Metro AG’s Sustainability Department, explained his company’s strategy. Smallholders were not regarded as mere suppliers but as consumers at the same time, and for a company like Metro AG, both sides were important. This was why the company was supporting smallholders in gaining access to markets. In addition, smallholders ought to have access to insurance and other financing options, Matern said.

Smallholders are always producing at a high risk. Insurance against inclement weather or natural disasters can prevent smallholders from dropping out of the value-added chain. Michael Anthony of Allianz SE explained that the use of satellite and radar technology was a promising development. A new system to be introduced in 2013 was going to enable insurance companies to identify the extent of damage immediately after the occurrence of a natural disaster. In this manner, farmers with a harvest insurance could be compensated for losses more quickly. Faster loss payment enabled faster reconstruction, which in turn lowered production losses, resulting in more secure income.

Kristian Schmidt, Director of the Human Development Department of the DG Development and Cooperation/EuropeAid, emphasised that the European Commission intended to support more transparency in trading land title rights, e.g. by providing information on markets and prices, so that smallholders were not disadvantaged here. At the same time, smallholders and producers ought to opt for selling their produce not only in the European market, but also, increasingly in local markets. Schmidt described the Commission’s approaches in the area of rural development: 1) The European Commission had for a long time neglected agriculture as a development objective and so had many African countries. Now the focus on agriculture was back. 2) Private sector engagement was also being fostered now. Europe would try to facilitate stronger cooperation with Africa. 3) There was a need to involve farmers’ organisations to guarantee an equal power relationship between the private sector and farmers.

Joe Cerell, Director of the Bill Gates Foundation in Europe, maintained that sustainable value-added chains are important to break the vicious circle of poverty and social marginalisation. Summing up the debate in her closing word, GIZ Management Board Chair Tanja Gönner stressed the aspects of trust, cooperation and knowledge transfer. Gönner pledged that the European development partners would “make their contribution to ensuring that the synergy effects of cooperation between government, the private sector and smallholders really come to bear. And they will see to it that smallholders can also benefit from new, innovative approaches, such as agricultural insurance.”

For more information on the event and the video live-stream, see
www.smallfarmersbigbusiness.org