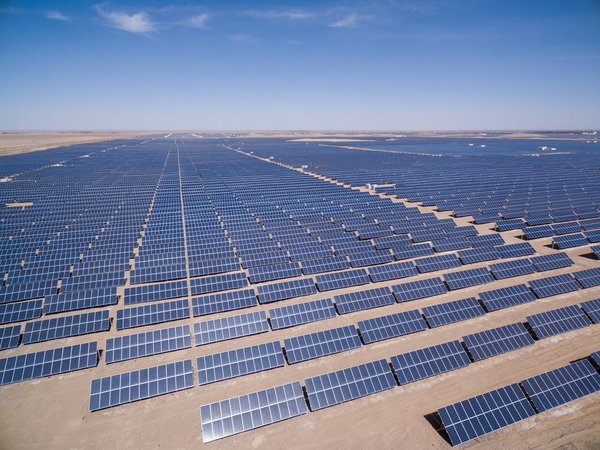 Expansion of renewables are a main driver on the pathway to China’s goal to achieve carbon neutrality before 2060. The country plans to build huge solar and wind power capacities in the Gobi desert.

China plans to build 450 gigawatts (GW) of solar and wind power generation capacity in the Gobi and other desert region, reported the Reuters news agency in April 2022. President Xi Jinping has pledged to bring China's total wind and solar capacity to at least 1,200 GW and to cap its carbon emission to a peak by 2030. China had installed 306 GW of solar power capacity and 328 GW wind capacity by the end of 2021, Reuters reported. The construction of about 100 GW of solar power capacity is already under way in the desert area.

China aims to have CO2 emissions peak before 2030 and achieve carbon neutrality before 2060. In April, the National Energy Administration (NEA) reported that China has unveiled a five-year plan, from 2021 to 2025, on developing energy technologies to propel green growth and digital transformation of the energy sector. The country will focus on developing new technologies to render a more efficient, cost-effective and reliable supply of renewables such as wind, solar, biomass and geothermal energy, according to the plan jointly released by the NEA and the Ministry of Science and Technology.

Technological breakthroughs are expected in the generation and usage of hydrogen energy, the plan stated, adding that a new power grid system will be established to accommodate renewable energy sources, and power storage will be enhanced.

Roadmap to Carbon Neutrality in China

The report An Energy Sector Roadmap to Carbon Neutrality in China, published in September 2021 by the International Energy Agency (IEA), sets out a pathway consistent with China’s announced ambitions to reach a peak in CO2 emissions before 2030 and achieve carbon neutrality before 2060.

The main drivers of emission reductions between now and 2030 in this pathway are energy efficiency improvements, expansion of renewables and a reduction in coal use. Electricity generation from renewables, mainly wind and solar PV, will increase seven-fold between 2020 and 2060, accounting for almost 80 per cent of China’s power mix by then. Industrial CO2 emissions will decline by nearly 95 per cent by 2060, with the role of emerging innovative technologies, such as hydrogen and carbon capture, growing strongly after 2030. These changes will boost China’s labour market, with more new jobs created in growing low-carbon energy technologies than are lost in declining fossil fuel industries, according to IEA.