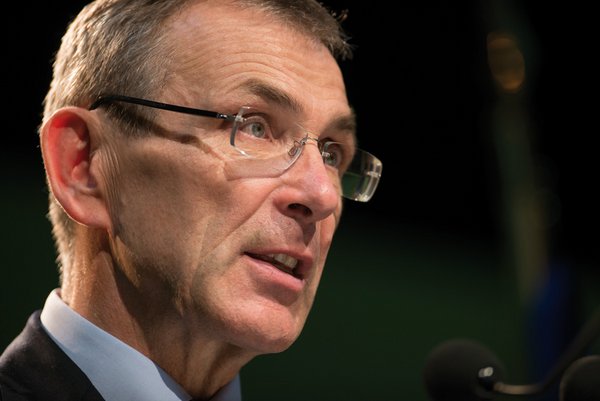 Organised by the European Commission for the seventh time, this year’s European Development Days were held under the motto “Sustainable and inclusive growth for human development”. The more than 50 events centred on three topics: - Sustainable agriculture, food security and resilience<br /> - The private sector and development<br /> - Empowering people for inclusive growth

The 7th European Development Days, held in Brussels/Belgium, pursued three objectives: discuss how best to empower farmers and scale up agricultural production in development countries in order to reach food security, evaluate new approaches to public-private collaboration, and show ways so that all people can participate in and benefit from wealth and job creation.

The issue of resilience formed a thread followed by a large number of the events. The participants of the Panel “A more effective partnership for a more effective world” agreed that humanitarian and development teams had to work more closely together. The aim had to be to ensure that development gains were not lost to damage from natural disasters and that relief efforts had long-term strategies for development built into them. In this context, Kristalina Georgieva, European Commissioner for International Cooperation, Humanitarian And Crisis Response, criticised that today, just two per cent of development assistance was allocated to disaster preparedness and response, and out of this, only 3.6 per cent benefited preparedness, and the rest response/rehabilitation. Why should this be the case? “Preparedness is not an attractive field of action,” Georgieva commented.

Caroline Anstey, Managing Director of the World Bank Group, noted a further imbalance: Every third US dollar spent in the context of development co-operation went lost because it was invested in areas that had already been established but were then destroyed, for example through natural disasters. “We have been holding a large number of international meetings addressing global financial safety nets since 2008. But what we need is human safety nets,” Anstey maintained, and she reminded participants that across the world, 56 per cent of countries had weak social protection systems. Anstey stressed the importance of reliable data in this context, for “otherwise, we don’t know where the money is supposed to go”. For example, just under half of the countries in sub-Saharan Africa had not conducted any household surveys for ten years.

Many actors, one goal: zero hunger

It is a known fact that how a child is nourished from its conception to its second birthday sets the course for its physical and mental development potential. But one in four children is stunted in its development because of under-nutrition, while one-third of all child deaths around the world are related to malnutrition. Pervasive, long-term under-nutrition is destroying the potential of millions of children, thus slowly eroding the foundations of the global economy. Despite this insight, policy-makers are still hesitating to integrate nutrition into health, agriculture and food security initiatives. Why this should be the case and how this could be counteracted was discussed at the high-level panel titled “Resilience: the nutrition dimension”.

“It is unbearable that so many children are dying from malnutrition. The time to act is yesterday, not tomorrow,” Francesca Mosca of the Directorate-General for Development and Cooperation der European Commission said in her introductory note. This was whey the EU was involved in the SUN (Scaling-Up Nutrition) initiative launched in 2010. So far, more than 30 had committed themselves in the campaign to significantly reduce child under-nutrition in their countries. The problem here was clearly not a lack or shortage of food, the panellists unanimously stressed. Also, proven, low-cost remedies and solutions to undernourishment were available. What was needed was more leadership and more political will to adopt nutrition policies and take effective action.

“If we can bring nutrition to the forefront, we know that it will have a huge return of investment,” said Paulus Verschuren of the Ministry of Foreign Affairs of the Netherlands. All the pieces of solution were there. They simply had to be put together and adapted to the local needs. On the one hand, greater and better sustainable production in the field was important; on the other, food had to be available, affordable and accessible for consumers. Here, income and knowledge were equally important.

However, even the best programmes will be of no use if the social conditions are not taken into consideration. This was stressed by Indu Capoor, Director of the Indian Centre for Health Education, Training and Nutrition Awareness. If girls continued to get married at an early age, the problem of low wage births would not be remedied; if women continued to be illiterate, they would not be in a position to feed their children sufficiently. If no attention was given to who was participating in fortification programmes, only the men would benefit from them in patriarchal societies. In her opinion, the focus should therefore be on educating and training girls and mothers; in addition, a sustainable nutrition strategy ought to be developed which was based on local indigenous markets. To achieve this, nutrition had to attain the same status as agriculture, so that farmers would not only be interested in growing cash crops but realise that food crops could be worthwhile, too. Multisectoral action was required to address the highly complex topic of nutrition, Capoor stressed. But this meant that achieving success would be especially difficult, for most donors wished to work bilaterally and sought fast results.

No growth without social protection

In his final address, EU Development Commissioner Andris Piebalgs reminded the participants of Rio+20 and the post-2015 debate, in which sustainability assumes a central position. But according to the EU Commissioner, sustainability was just one half of the growth equation that the EU had established with its Agenda for Change; the other half of that equation was inclusiveness. In addition to poverty eradication, human dignity, decent work and responsible resource management, social protection had to be at the core of the post-2015 development framework as well. Nevertheless, the international community always ought to bear in mind what their work was really about: people-centred development.

You can find a wealth of background information and summaries of the individual events, quotes from the presentations as well as video recordings and photos on  www.eudevdays.com