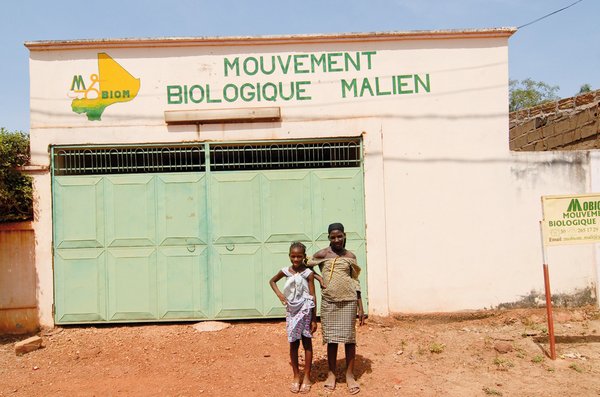 What prospect does organic farming hold for farmers in the South?
Photo: J. Boethling

The principles of organic farming were developed in Northern countries, largely in response to nutrient abuse in young, nutrient-rich soils. Consumers in the North are willing to pay for products with additional value such as environmental benefits. In contrast, farmers in the South struggle with the often low nutrient status of their soils and poor access to markets. The authors argue that avoidance of organic farming being limited to “prime sites” will require a more site-specific definition of organic agriculture; they suggest that organic certification systems be broadened to bring organic agriculture from the “elite” to the public while meeting global needs for food security.

Millions of farmers in developing countries, particularly in agro-ecologically or infrastructurally marginalised areas, practise no-external-input agriculture and are thus fulfilling the legal requirements of certified organic agriculture (avoidance of easily-soluble mineral fertilisers, chemical-synthetic plant protection and genetically modified organisms (GMOs)) without being recognised or compensated for. Despite their heavy reliance on nutrient recycling and often highly diverse germplasm (such as in agro-silvo-pastoral, homegarden or multiple cropping systems), these frequently ancient land-use modes may not be sustainable, however, as often indicated by field abandonment, soil erosion or rural exodus.

In the higher latitudes, the yield-enhancing principles of organic agriculture were elaborated many decades ago by writers and philosophers such as Jerome Irving Rodale (USA), and for the bio-dynamic movement, Rudolf Steiner (Switzerland), rather than by agricultural scientists such as Rolf and Maria Müller and Hans Peter Rusch (Switzerland). These principles largely reflect negative ecological experiences of nutrient abuse in temperate agro-ecosystems where young soils predominate. Such soils are typically rich in plant-available nutrients and organic matter that can be easily exploited by appropriate cropping systems. In addition, today’s farmers in these regions benefit from easy access to consumers willing to pay for products whose labels promise additional value such as environmental benefits, animal welfare, social fashion, or personal health. The socio-ecological reality of lower latitude (subtropical and tropical) countries is, however, often fundamentally different: many low- or no-external input farmers in Africa, Asia and Latin America are exposed to high rainfall variability and suffer from poor access to produce markets. In addition, their primary production is often limited by extremely low levels of available nutrients such as phosphorus and potassium in highly weathered soils, which cannot be easily replenished by nutrient cycling or mobilisation from the subsoil regardless of land-use or cropping systems. Moreover, only in temperate regions can soil organic matter be maintained or even enhanced through lay- or legume-based rotation systems with a winter-related break of mineralisation.

Aimed at avoiding certified organic farming from remaining limited to ‘prime sites’ a debate is going on about modifications to the different certification systems that regulate the worldwide, often excessively energy-intensive trade with organic produce. At present, the different organic certification schemes seem to focus too much on DON’Ts rather than DOs (absence of sustainability criteria and social standards, but permission of indiscriminate fossil water use for food or forage production). This debate has the potential to open the avenue for a more site-specific definition of rules under which organic production may occur and its produce be marketed locally and worldwide. Purists criticise such efforts to reconcile existing restrictions of the better-off in the temperate zones with the agro-ecological realities of the poor in the lower latitudes. They argue that this may be one step towards a ‘conventionalisation of organic agriculture’. However, given the global needs of food security and food sovereignty, the concepts of organic certification need to be broadened and mutually beneficial linkages between conventional and organic agriculture merit to be explored.

What can organic agriculture achieve, and where are its limits?

During the last decade, an often emotional, unnecessarily provocative discussion has been initiated over the question of whether organic agriculture (under its current set of regulations) can ‘feed the world’. Five years ago, based on a rather large dataset from field experiments, the ‘Michigan Study’ (Badgley et al., 2007) seemed to provide evidence of a large, unexploited yield potential of organic agricultural practices compared to conventional crop management, particularly in developing (tropical and subtropical) countries. Similar claims of yield superiority by the use of organic approaches were made recently by proponents of the ‘System of Rice Intensification’ (SRI). These reports were taken up by broad vision statements of international agricultural organisations adjuring the potential of organic agriculture for a better future of the developing world’s poor (El-Hage Scialabba, 2007). While a widely cited UNEP report (2008) concluded ‘that organic agriculture can build up natural resources, strengthen communities and improve human capacity, thus improving food security by addressing many different causal factors simultaneously’, this statement seems largely based on poorly defined circumstantial evidence, lacking sufficient solid data.

An analysis of the Michigan Study’s database (Connor, 2007) unravelled that in addition to basic calculating errors in the analysis, the experimental results for organic yields were based on often enormous quantities of organic amendments brought in from outside (mulch, compost, manure) and a poor choice of conventional reference yields. Therefore, the study’s overly optimistic description of yield levels in organic systems can hardly be extrapolated from the plot to the field or regional level. Nevertheless, even at 20–50 per cent lower yields, agricultural households may strongly benefit from organic production whenever its output can be adequately supplied to national or international premium markets. If organic produce is derived from rare germplasm (landraces of plants and animals, wild collections), its sustainable utilisation and organic marketing may even guarantee its survival (in situ conservation) under structural change. Organic agriculture can thus very well contribute to strengthening rural livelihoods and offer opportunities for decent work, value addition and genetic diversity to producers in developing countries. Organic agriculture should, however, not accept to be held hostage by the undeniable need for mass production of low-cost food and agrarian raw materials that the majority of the global population demand, industry requires, and politicians promise to procure.

Over the last ten years, new trends in global agricultural production have emerged. These were triggered by (i) a large absolute growth in non-agricultural consumers due to demography and urbanisation, (ii) a major increase in middle-class consumers, mainly in Asia, who only spend a fraction of their income on their caloric needs and shift their diet to a larger share of animal products (meat, milk and eggs; see Figure below, whereby consumption per capita has to be multiplied by population numbers to obtain total demand data), and (iii) the expansion of industrial agriculture geared towards the provision of feed concentrates (corn, cassava, soybean) and as raw material for the renewable energy sector beyond sugarcane (mainly oil palm and maize for diesel and ethanol production; Buerkert and Schlecht, 2009). This has led not only to a large increase in total production of the crops concerned (from 2000–2010 global production increased by 104 % in palm oil, 43 % in corn, 30 % in roots and tubers, 38 % in soybean, and only 12 % and 6 % in the poor’s staples paddy rice and millet), but also to an unprecedented expansion in cultivated area. The consequences were the ongoing rainforest destruction (conversion into palm oil plantations and cassava stands) in Southeast Asia and a partial replacement of areas dedicated to food crops by energy plant cultivations in the USA and South America, often involving genetically modified varieties with herbicide or insect resistance (Roundup-ready soybean, Bt-maize). As these changes occurred, global investors have discovered the food market with its dwindling reserves to be a profitable area of speculation, thereby increasing price volatility and subsequent vulnerability of undernourished people. Despite numerous efforts to enhance access to affordable food, their numbers have remained relatively constant, at 880 million people in 1969 (33 % of the world's total) and 925 million in 2010 (16 % of total) of whom today, 62 per cent live in Asia and the Pacific region and 26 per cent in sub-Saharan Africa (FAO, 2010). Their short-term increase to 1,030 million people in 2008 reflected the then dramatic rise in food prices, which peaked at 950 US dollars per ton of wheat as a consequence of the above described three trends.

Global agricultural development efforts and policies therefore urgently need a double focus: on the one hand, they should continue to support the production of affordable staples rather than energy plants to enhance the food security of non-agricultural poor consumers with little willingness / ability to pay for a socio-environmentally beneficial food histoiry (resource-efficient, yield- and consumer-oriented conventional agriculture). On the other hand, (certified) organic agriculture needs to be fostered to fulfill its roles in enhancing food sovereignty for largely subsistence-oriented farmers while providing an additional opportunity for the marketing of premium value plant and animal surpluses. This will allow many small-scale agricultural producers to secure their livelihoods and strengthen land-use systems which emphasise in situ conservation of genetic resources and (agri-) cultural identity. This will also strengthen the dialogue between promotors of organic and conventional agriculture towards making the latter more ecologically sound and products of the former more accessible to consumers worldwide.

Eva Schlecht
Animal Husbandry in the Tropics and Subtropics
University of Kassel and University of Göttingen Witzenhausen, Germany
schlecht@uni-kassel.de