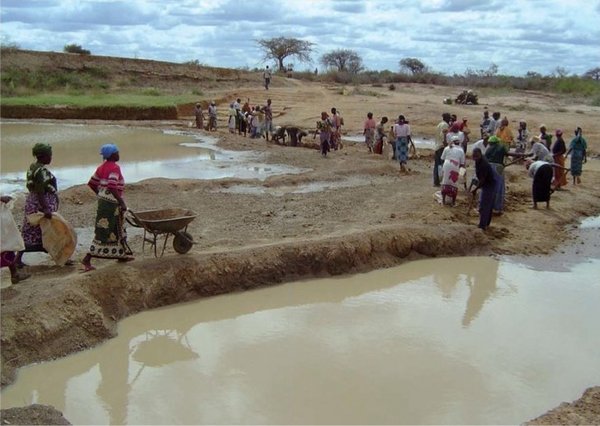 Not a hopeless case

Every few years, you read the same headlines: People starving in the Horn of Africa! Worst drought for 60 years! Tens of thousands threatening to starve! And each time, there are calls for donations and accusations that development politics is simply not doing enough. Then all the public coffers are scoured for special funds. However, the critical press would like to know why it is always only the symptoms that are tampered with while no efforts are made to address the root problem.

All of the countries in the Horn of Africa are affected by the current crisis. Official figures suggest that presently, 12 million people are suffering hardship of whom 4.8 million are from Ethiopia, 3.7 million from Kenya and 3.7 million from Somalia (almost half the population of this country) and 0.16 million from Djibouti. A study of the causes shows that several factors are at work here that impact negatively on the living conditions of the population: The countries hit are suffering from fragile or even failed statehood and massive terrorism and refugee problems that are also affecting neighbouring countries (Somalia). There are border disputes between countries (Ethiopia and Eritrea, Ethiopia and Kenya) and/or considerable ethnic conflicts (Kenya). Corruption is widespread everywhere, and massive insecurity based on crime is exacerbating short-term crises and above all preventing long-term planning and necessary investment.

In terms of climate, especially in the arid und semi-arid regions, wide expanses of land are very much disadvantaged. There is only little and highly irregular precipitation, while periods of severe drought are on the increase. Even in the few favourable locations, rainfall is no longer reliable, with flash-floods often alternating with scarce precipitation. Climate change is already becoming noticeable. Thus we can find only very little and very uneven local production of agricultural goods and services and poorly working local and regional markets in the Horn of Africa.

So is it a hopeless situation all in all? We believe that this need not be the case, despite all the negative factors. Of course only little can sustainably change for the good as long as regions are still dominated by armed conflict. In such situations, it is important to support the local population in developing survival strategies. Wherever no conflicts are inhibiting people’s lives but climate conditions are becoming more and more problematic, appropriate rural development measures can also be the key to sustainable development in disadvantaged regions.

In August 2011, the German Federal Government decided to provide special cash financing totalling 118 million euro to combat the effects of drought in the Horn of Africa; out of this sum, 11 million euro is earmarked for the agricultural projects of German Technical Co-operation (7 million for Kenya and 4 million for Ethiopia). In both countries, the planned measures are being implemented jointly by “Deutsche Gesell­schaft für Internationale Zusammenarbeit” (GIZ) and “Deutsche Welthungerhilfe” (WHH) and go way beyond short-term emergency aid. Rather, they are being used to boost the population’s resilience towards the effects of the current drought and are aimed to develop appropriate solutions for agricultural production suiting the changed climatic conditions. They above all include locally adapted farming, in particular to raise the ability of soils to retain water, the distribution and reproduction of drought-tolerant seed such as millet or cassava and the restoration or construction of water retention basins including micro-irrigation. In animal husbandry, animal health services are being improved and fodder grass seed is being provided so that the pastoralists can store fodder for the drought period.

In addition to these more technical aspects, capacity development measures are playing an important role in establishing appropriate solutions among livestock keepers and tillers. GIZ and the WHH are confident that in spite of the short running period of the projects of three to six months, effects will be achieved and the people in the arid and semi-arid areas of the Horn of Africa will be in a better position to prepare for the next drought, which is bound to come.

In future, too, the countries in the Horn of Africa will have to reckon with a more frequent occurrence of droughts. Twenty years ago, such phases would set in twice every ten years, while today they already do so four or five times in ten years. This is why the population have to be supported in developing adaptation strategies, for example through longer-term integrated food security programmes. A combination of measures like those described above and linked with sensitisation campaigns to shift people away from a one-sided orientation on maize as the main staple crop can improve food security in semi-arid areas.

Here, Deutsche Welthungerhilfe can boast considerable experience at local level. GIZ is well-represented at regional and national level. Close co-operation between the two organisations is resulting in synergies and good experience also being provided to other actors in the sector and thus being extended.

So it is by no means a hopeless case but rather a long process, since traditional cultivation methods cannot be changed from one day to the next.