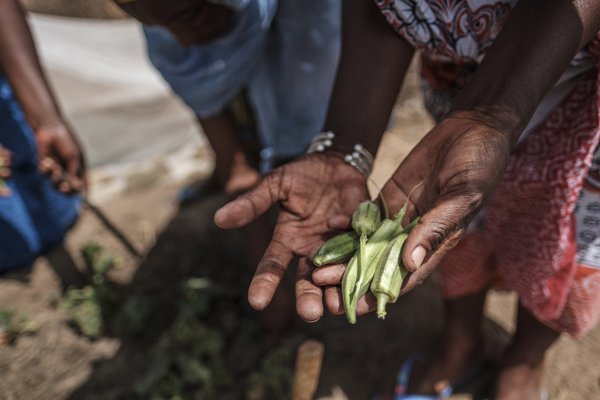 A woman holding okra pods in a village near Touba, Senegal in April 2019. Food insecurity is still high in the Eastern Africa subregion.
Photo: ©FAO/Eduardo Soteras

Recognising the slow progress in improving the food security and nutrition situation in Eastern Africa, nations have formed a new alliance to intensify the battle against food insecurity, malnutrition and hunger.

Nine eastern African countries have formed the “Eastern African Parliamentary Alliance for Food Security and Nutrition (EAPA FSN)”, which was launched on 15 April 2019 in Arusha, Tanzania. The members committed to leveraging their critical role as legislators to promote the Right to Food. This right is realised when every man, woman and child has physical and economic access, at all times, to adequate amounts of nutritious food.

A significant number of people in Eastern Africa are experiencing food shortage, malnutrition and hunger on a daily basis, despite the area having vast natural resources. Undernourishment in Africa affects more than 257 million people, over 132 million of whom are living in the Eastern Africa subregion. Similarly, despite efforts, the prevalence of severe food insecurity is on the rise in the subregion, with over 31 per cent of the total population affected.

Members of parliaments from Djibouti, Eritrea, Ethiopia, Kenya, Rwanda, Somalia, South Sudan, Tanzania and Uganda, as well as from the East African Legislative Assembly and the Inter-parliamentary Union of the Intergovernmental Authority on Development (IGAD) have formed this Alliance in the pursuit of driving the food security and nutrition agenda forward at national and regional levels.

After intensive discussions, participating Members of parliaments endorsed the EAPA FSN founding document. An Executive Committee of five members was elected to coordinate the activities of the alliance for the next two years. Hon. Abdi Hassen Ali, Chair of the Somalia Parliamentary Alliance against hunger and malnutrition, was elected as Chairperson of the Executive Committee and the Alliance.

Representatives from (IGAD), the Tanzanian Scaling-Up Nutrition Movement and UNICEF-Tanzania and the Government of Tanzania pledged their continuous support to the Alliance. Experts from the Regional Universities Forum for Capacity Building in Agriculture (RUFORUM) facilitated a knowledge-sharing and capacity-building event on regional and global commitments for achieving food security and nutrition as well as on the linkages of governance of tenure with food security in Eastern Africa. The meeting convened about 40 participants from 11 countries.