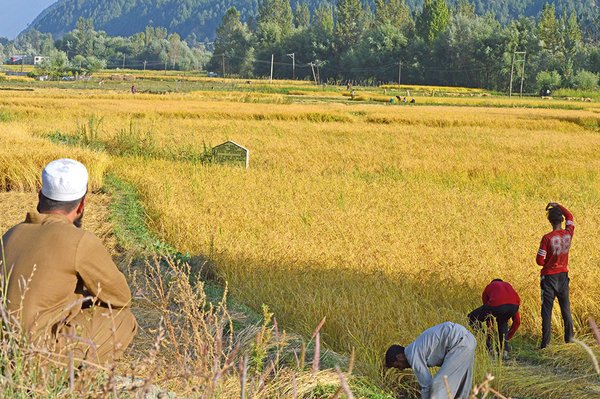 In August 2019, India suspended the special status of the Jammu & Kashmir region. Experts feared that in combination with drastic changes in citizenship and land laws, the country’s new agriculture policy would aggravate the impacts of years of shrinkage in farmlands in the Himalayan region, thus negatively affecting the population’s food situation.

Indian Administered Kashmir (Jammu & Kashmir), the northernmost region of the Indian subcontinent, where an armed conflict has been simmering for the past three decades, has a predominantly agriculture-based (including horticulture) economy, with 70 per cent of population directly or indirectly engaged in agricultural and allied occupations.
However, lack of proper governance owing to the perpetual political and armed conflict in the region in recent decades has led to shrinkage of agricultural land because of haphazard housing construction, including construction on agricultural land. Such an increase in built-up area over agricultural land in a region where farmers have small land-holdings, with an average farmer owning less than an acre of land, is going to have adverse impacts on the food security of the region, experts say.

Sultan Parray, a farmer in Shalteng-Kashmir, said that roughly some 25,000 Kanals (1,241 hectares) of the croplands once surrounding his village now form residential colonies. Parray and his neighbours say that they often hear lorries carrying land-filling material buzzing around in their area. “It has been happening for years and has entirely changed our surroundings, which are now in total contrast to when we were young,” says the 60-year-old.

Farmers in other parts of Kashmir narrate similar tales of built-up areas steadily stretching while more and more agricultural land rapidly comes under housing. “Twenty years back, there were large swathes of agricultural land separating our town from Srinagar, but now, the two towns have joined with buildings and houses built on the agricultural land in these years,” says Abdul Rashid, a farmer living near Ganderbal town, north-east of Srinagar, Kashmir’s capital.

The Himalayan region, as per the official estimates in 2018, had lost 53,000 of its total 158,000 hectares of paddy land from 2006 to 2016. Sajad Hassan Baba, an agricultural economist at Kashmir’s Agricultural University, says that losing the paddy land to built-up areas is a problem because Kashmiris are voracious rice-eaters, with rice being their staple food. “As per our surveys, there have been economic reasons for the major conversion of paddy land, and if the trend continues, coupled with the climatic change, we will be 80 per cent dependent on imports for meeting our food requirements by the end of this century,” says senior agricultural scientist Mohammad Yousuf Zargar.

According to Peerzada Amin, a sociologist at Kashmir University’s Department of Sociology, agricultural land has been used for housing “because the state has failed to implement the laws which prohibit conversion of agricultural land for any other use”. He says that it was mostly agricultural land around towns that became affected as people from villages moved towards urban areas where educational and health facilities existed. Plus, he said, towns were considered safe security-wise compared to the rural areas, which were militancy-infested and therefore attracted anti-insurgency operations from the government forces.

According to Kashmir government’s agriculture department, it is important to address and overcome several challenges in the agriculture sector, including low agricultural productivity, susceptibility to weather shocks, poor management of land, water, and soils, and high agricultural losses. “[Our mission is] to position Jammu and Kashmir as a Global agro brand by creating an enabling framework for the growth of Agriculture, Horticulture and the Food Processing Industry along with enhancing farmers' income and farming standards by social, technological and financial inclusion,” reads a segment of the government’s new agriculture policy.

The agriculture department has now opted for prioritising crops and increasing yields through the introduction of high-yielding varieties, hybrid varieties and increasing the genetic potential of different varieties in the next few years. For example, vegetables are currently grown on an area of 48,000 hectares, which is expected to double in the next five years as per the estimates of Kashmir’s agriculture department. Also, the current 81,000 bee colonies in Kashmir are to be increased to 700,000 colonies in the next five years. Similarly, in the same period, productivity per hectare in the case of maize, currently 32 quintals, is to be increased to 60 quintals per hectare.

However, experts say that much focus should be on growing rice, which is consumed in all households in the region. “Most of our agricultural land is suited for rice and maize. So, it makes a lot of sense for us to produce food grains to feed our population, which is growing fast. We simply can’t afford to import all our food grain,” says Baba. As per the official figures, Jammu and Kashmir imports 265,000 metric tons of food grains annually, and the food grain deficit in the region is put at 21.7 per cent which, experts say, is mainly due to geographical and climatic conditions, small and fragmented land-holdings and the conversion of agricultural land for horticulture and other non-agricultural purposes.

Against this background, the government’s land-use policy appears to be somewhat intriguing, especially when seen in the context of its claims to boost agricultural growth and food security in the region. For example, the new Housing Policy introduced last year approved slum rehabilitation projects, special townships and incentives like exemptions from building permit fees and land use conversion.

For over 70 years, Kashmiris have borne the brunt of the dispute between India and Pakistan over the erstwhile princely state of Jammu and Kashmir, with an armed conflict (and frequent border tensions between India and Pakistan) continuing in the Himalayan region for over three decades. The prolonged political and armed violence has resulted in large-scale human rights violations.

For example, according to a UN human rights report on Kashmir in 2018, one of the most dangerous weapons used against protesters in 2016 – and one which is still being employed by Indian security forces – was the pellet-firing shotgun. “According to official figures, 17 people were killed by shotgun pellets between July 2016 and August 2017, and 6,221 people were injured by the metal pellets between 2016 and March 2017. Civil society organisations believe that many of them have been partially or completely blinded,” the UN report said. A Reuters report in 2019 stated that in an attempt to stifle the protests sparked by the removal of Kashmir’s semi-autonomous status by New Delhi in early August in 2019, India arrested more than 38,00 people in Kashmir, besides cutting Internet and mobile services and imposing curfew-like restrictions in many areas.

The Kashmir dispute is internationally recognised through UN Security Council resolutions (1948–1951) although the intergovernmental organisation has so far not succeeded in bringing India and Pakistan together for talks on the final resolution of the dispute.

However, the Indian government has since made drastic changes to citizenship laws and land ownership laws, re-designated conservation areas and taken control of agricultural policies that emphasise production and export of high-value horticultural foods. For example, all the laws related to land-use or utilisation of land have been amended by omitting the sections prohibiting transfer of non-movable property to the non-permanent residents of Jammu and Kashmir. This means that any land (including agricultural land) in Kashmir can be purchased by non-indigenous people – the semi-autonomous status of Kashmir provided a strong protection against ownership of land and other immovable property by people other than the original or permanent residents of Kashmir.

Also, the government of India passed a set of new controversial farm laws in Indian parliament in September 2020 which are now also applicable to Jammu and Kashmir (under the semi-autonomous status, Jammu and Kashmir state had a choice to implement or decline laws in the state made by the Indian parliament). Among other things, the new farm laws lay much thrust on commercialisation of crops. Researchers say that the shift from cultivation of food grains to cultivation of commercial crops is reminiscent of the British colonial period, when the cultivation of export crops, such as opium and indigo, was forced upon the peasantry by the East India Company.

“As a result of the new farm laws, cultivation of food grains in Jammu & Kashmir is bound to take yet another hit. Commercial crops, including apples, almond, walnut, peach, cherry, and saffron, will witness an escalation in demand, as this category will increase export prospects, generating greater profits for farmers and private players,” a researcher wrote in an article published on October 13th, 2020 in an Indian online publication. The impact of this on the population’s food situation remains to be seen.

Athar Parvaiz is a freelance journalist based in Srinagar/ Kashmir, India.
Contact: atharparvaiz.ami@gmail.com