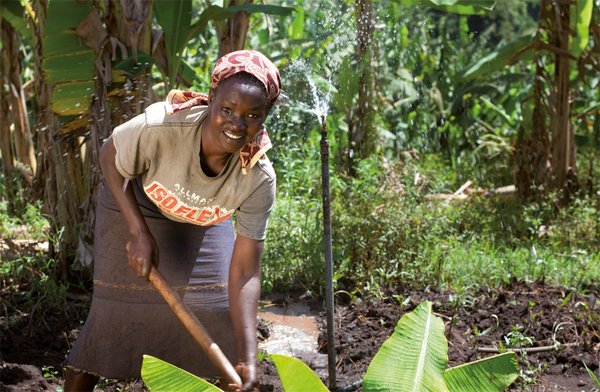 Irrigation and markets – a fertile combination for poverty reduction

In the early 1980s, Germany’s KfW Development Bank financed the first irrigation project around Mount Kenya. A reliable supply of water was expected to enable farmers to achieve stable yields. In this way, they could not only safeguard their own food supply but also supply new markets and earn themselves an income. The following article takes stock of progress and benefits.

Even 30 years ago, Mount Kenya's rainy seasons did not always arrive regularly. The predominantly poor farmers in the Mitunguu region had great difficulties in planning the production of their crops. Given the great uncertainty regarding the amounts and distribution of rainfall and ensuing risk of a crop failure, they saw no point in using improved seed or fertilisers. Therefore their production was concentrated on growing a few food crops for their own use; no monetary income was derived from agriculture. In years when the harvests failed (two years out of five) even food security was severely jeopardised. Farmers were then forced to hire themselves out as itinerant labourers in other regions. Illiteracy was widespread. Women and children had to bear a heavy share of the work in the fields just to survive. Social institutions, schools and shops barely existed.
From 1982 to 1985, KfW on behalf of the German Federal Ministry for Economic Cooperation and Development (BMZ) financed the first irrigation perimeter around Mount Kenya. Thanks to the region’s topography it was possible to choose a robust system with low maintenance and upkeep costs: pumps are unnecessary because the water is carried down the slope by gravity. Since 1985, 301 smallholders have had access to a regular and reliable supply of water, sufficient for two hectares of land maximum (the upper limit per farmer as defined by the project).

The aim was to ensure a consistent and continuous irrigation flow as far as possible (“water for 24 hours 365 days a year”). Over time, the number of farms involved rose from 301 to around 1,200, and the originally planned area under irrigation doubled to 800 hectares. As in most African countries, the increase in farms went hand in hand with a drastic reduction in farmed area per holding: in 1985, 85 per cent of holdings were larger than two hectares in size, as opposed to only 25 per cent today; 40 per cent of holdings are smaller than one hectare.

Up to the end of the 1980s, the main crops farmed in Kenya were cotton and tobacco as cash crops, along with maize and beans. In those days the country had already liberalised the marketing of field vegetables and other horticultural products and it was no longer mandatory to sell these products via the parastatal Horticultural Crop Development Authority (HCDA). This meant that farmers could freely decide to produce products that promised higher margins. Initially they opted for various types of vegetables, but these proved troublesome and difficult to market. Then, from 1990, the situation was transformed by the production of bananas, which are considerably less labour-intensive to grow and sold very well in local markets.
Today bananas are a mainstay crop for small and large farms alike. Furthermore, maize and beans plus another cash crop, papaya, are grown – output of the latter is rising steadily since local sales markets for this fruit have emerged. Local demand for these primary agricultural products has remained extremely high. From the view Mitunguu Farmers’ Cooperative (MIFCO) was founded for the maintenance and upkeep of the irrigation systems, which are financed by the water charges paid by users. Its other responsibilities were to provide seed and fertilisers and to organise marketing. For a short time after liberalisation it also took on the role of a broker by negotiating contracts with private traders and paying the farmers the difference between revenues, water charges and transaction costs. It soon became apparent, however, that MIFCO was completely overwhelmed by this task. Accounting irregularities meant that farmers lost their trust in MIFCO as an honest broker. Furthermore, the buyers began to negotiate and conclude contracts directly with the farmers.

Finally, in 1992, an independent organisation of water users, the Water User Association (WUA) was founded, which confined itself largely to questions of operating and maintaining the irrigation infrastructure. MIFCO and WUA were eventually merged, but only once MIFCO had officially ceased its commercial activities in 2004.

Today the vast majority of banana marketing takes place directly in the field. A few days before harvest, contracts are concluded at the field boundary and the traders take responsibility for harvesting on the plantations. By this means the sellers reduce their own workload and minimise the risk of spoiling the products through incorrect harvesting and transportation and the uncertainties of market prices. Buyers, for their part, have the advantage of inspecting and selecting the goods directly in the field to ensure quality. Monopolistic structures are prevented since several buyers exist and the farmers do not necessarily sell to the first bidder.

Current studies (see Figure) show that farmers could substantially raise their margins if they were to sell their main product at local or central markets instead of directly from the field. However, this would presuppose that they could organise efficient transportation; in fact, the farmers deliberately settle for lower margins. In return, they are spared the need to make any major marketing effort or to rely on any type of marketing organisation.

As interviews with the participating farmers have shown, some of them are perfectly aware that they could achieve substantially higher prices for their products, and pay lower purchase prices for the inputs (up to 40 per cent less for fertilisers, for example) if they organised themselves accordingly. Nevertheless they deliberately refrain from doing so. The mistrust of cooperatives is still deep-seated and is probably also well founded, given the negative experiences of the past.

Sales are impeded during the rainy season by the poor state of local roads and agricultural tracks. There are plans to build a tarred road to Mitunguu, which would distinctly improve the conditions for marketing.

Effects on the population’s living situation

In the mid-1980s, around 2,000 people lived in Mitunguu, and there were 300 agricultural holdings; the current figures are around 8,000 people and around 1,200 holdings, representing a fourfold increase in farm and population statistics. The proportion of families not employed in agriculture grew from around 10 per cent to the current figure of around 25 per cent of the population today. The annual population growth rate of 5.7 per cent is far above the currently estimated average population growth for Kenya (2.4 %). Thus despite the difficulties mentioned and the room for improvement that still exists, the region has its attractions for migrants from other parts of Kenya. Apart from this influx, the reduction in the average area of agricultural holdings is also explained by the partitioning of farms among numerous children (partible inheritance). Only around one-fifth of farms have not been partitioned over the course of time.

Model calculations show that even very small agricultural holdings are capable of generating income from banana sales sufficient to secure the basic food supply and, moreover, invest in housing and pay school fees. A contributory factor is that 60 per cent of the holdings have livestock (particularly cows, sheep and chickens).

The positive income effects generated by the project also become clear from a direct comparison between irrigated and non-irrigated parcels of land: irrigated land is higher in value by a factor of 20 (!). As little as 0.2 hectares is adequate to secure a livelihood.

Instead of two primary schools (1985) there are now nine primary schools and one secondary school. Around 2,800 pupils are being taught by 150 teachers. A few teachers and in some cases new classrooms were funded by parent initiatives. Moreover, the interviews reveal that the living conditions of women have improved considerably. Conversion from vegetables to bananas has reduced their workload substantially, since banana production requires less work and the men do a greater share.

Numerous businesses have been attracted by the rapid development of the location. Around ten banks have opened branches. There are now around 450 small businesses (30 years ago: 15), which have created some 650 new jobs. Around 900 people work all year round as hired labourers on the irrigated farms.

Despite the positive developments, numerous challenges remain to be mastered. Over time, numerous illegal connections to the water supply have been installed; only 40 per cent of users have paid their outstanding water charges for the last year. For that reason, there are hold-ups in the supply of spare parts, and the wages of MIFCO employees are delayed or go unpaid. The water supply is no longer continuous but intermittent. Given better maintenance and upkeep of the irrigation infrastructure, the users would certainly be more willing to pay their charges on time and in full. Appropriate public information measures are needed to make them aware that only if charges are paid can MIFCO afford to buy replacement parts and pay and motivate its staff.

The greatest problems to be faced, however, stem from the almost total lack of a drinking water supply. The drinking of unboiled irrigation water or river water leads to water-borne diseases that could be avoided. Additional problems are the relatively high prevalence of malaria due to the area of land under irrigation, inadequate connectivity to the electricity grid, and the poor transportation network. Purchasing and marketing could be optimised if a renewed effort were made to establish a purchasing and sales cooperative.

The problem of water tax

One threat foreseen by the farmers is the central government’s plan to introduce a water tax. So far this has been prevented by protests from the population, but would be a requirement in order to support the nationwide costs of the infrastructure and also to set incentives for better water management. On the other hand, the tax also ought to allow the state to support users in the maintenance and expansion of these systems, which has rarely if ever happened so far. The current policy paper (Kenya Draft National Irrigation Policy) is very guarded about stipulating basic regulations on user contributions to investment and running costs, and leaves it to local authorities to find acceptable solutions.

Despite the numerous weaknesses mentioned and various aspects in need of improvement, the Mitunguu irrigation project has decisively contributed to improving the living conditions of the population. The farmers were no longer forced to seek other forms of employment elsewhere. They have been able to replace their huts with comfortable stone houses, and can often afford a vehicle and keep livestock. Their food supply is secure throughout the year. The irrigation system has helped predominantly poor smallholders and their families to become members of Kenya’s still rather sparse middle class. For this middle class, educating their children is the foremost priority. Most of the farmers questioned underline as an essential achievement their ability to give their children a good schooling and enable them to learn a trade. The evaluation study on the project finds that around five times as many children from families benefiting from the irrigation project complete secondary school compared to families who are not beneficiaries, and nine times as many of their children gain a qualification from a higher-level school. This has been accomplished even though the number of agricultural holdings and the population figures have quadrupled over the last 27 years while the irrigated area has doubled. The key factors determining success have been the very robust, user-friendly and expandable design of the irrigation system and the favourable development of sales markets, particularly for bananas.

The article is based on an evaluation report, prepared for KfW and the Kenyan Water Ministry: Mitunguu Irrigation Scheme, 25 Years On, Ex-Post Assessment of Development, Functioning and Impact, Final Draft, November 2012