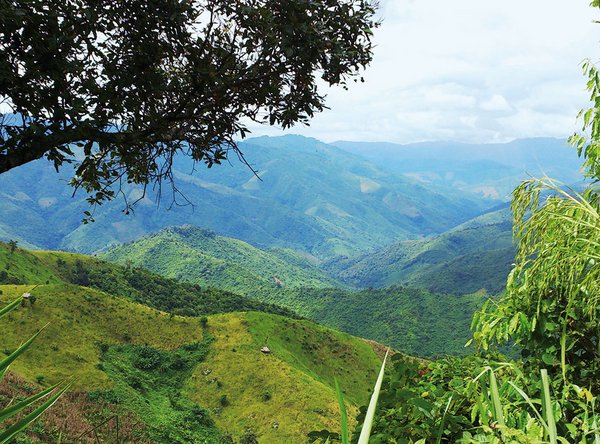 Integrated Watershed Management – an approach with a number of stumbling-blocks

Integrated Watershed Management represents an option for the management of water catchment areas. However, what may sound good in theory often proves to be very difficult when it comes to practical implementation, as an example from the Lower Mekong Region shows.

The rice farmers in the community of Hoa Le, in Vietnam’s central highlands, agree that water scarcity on the one hand and floods on the other are among the greatest challenges that farming in the region has to cope with. However, they realise that they are doing well in comparison to the people elsewhere in the valley. The head of the community, who has to attend the talks for official reasons, is smiling happily, for after all, the government built a dyke in the region some years back in order to prevent flooding. In addition, a reservoir for rice paddy irrigation has been enlarged, and the canals have been refurbished. Communicating with the government authority at district level is said to work well, and money, it is emphasised, gets to where it is meant to go.

IWSM is to accommodate a wide range of interests

This interview was conducted during the evaluation of two German projects in the water sector in Cambodia, Laos, Thailand and Vietnam (see Box at the end of the article). The Mekong River Basin is of considerable importance to these countries. More than 80 per cent of the population in the Lower Mekong Basin depend on its resources. They use the river for irrigation in farming and fisheries, for navigation and transport and in energy production. Up to 300 million people in Southeast Asia live on the food produced here. Increasing industrialisation and a growing tourism sector also require much water. Often, however, the use of the land and water resources to meet this wide range of demands does not fulfil the principles of sustainability. Frequently, the negative effects of flawed management practices such as soil degradation and water pollution or the higher intensity and frequency of flooding and droughts owing to climate change are not effectively addressed due to a lack of co-ordinated management.

In order to promote a sustainable handling of such problems, the projects examined were to introduce the concept of Integrated Watershed Management (IWSM, see Box below), adapt it to local conditions and create the necessary preconditions for its dissemination. This was to result in improvements being achieved in co-operation between authorities, civil society and citizens, initially in one pilot water catchment area per country. At the same time, strategy plans were compiled to optimise the water situation in each pilot area. Taking good practices into account, experts from the education sector, civil society and the authorities were trained while advice was simultaneously provided on introducing IWSM in national structures.

An area in which all runoff goes to a common outlet is the definition of a watershed. The IWSM-approach promotes close co-operation between the authorities and the water users at this local level, with boundaries between political sectors and local authorities often being crossed. Co-operation focuses on concrete problems in the watershed. In this respect, IWSM is not a product but a process; its aim is not to provide a specific blueprint for a given water management problem. Rather, it gives a broad set of principles, tools, and guidelines to be tailored to the specific context of the area.
The projects at hand considered a watershed not simply as a small hydrological unit but also as a socio-political-ecological entity which plays a crucial role in determining food as well as social and economic security and provides life support services to the rural population. Hence, human activity forms part of watersheds, and affects the watersheds and vice versa.

Deforestation was one of the key problems for the target group of the projects. Sensitisation campaigns conducted by staff trained in IWSM have led to a decline in deforestation aimed at creating cropland in the region, but it is not only the farmers who fell trees but above all the commercial timber industry. Timber firms are destroying the livelihoods of farmers through what is often an illegal export of lucrative tropical timber. Moreover, it was reported that in the 1990s, members of the Hmong minority migrated from northern Vietnam to the central highlands and were now carrying out slash-and-burn farming deep in the jungle.

Ethnic minorities were not reached by the sensitisation campaigns. For one thing, they were not specially addressed in the campaigns. Besides, the training material was not available in the languages required. Moreover, such training can only make sense if alternatives to the non-sustainable sources of income, such as slash-and-burn farming, are presented. This is where, for example, the integration of innovative financing mechanisms such as Payment for Environmental Services (PES), in which people are paid for conserving the forest as an ecosystem, would suggest itself. In one concrete case, PES was referred to in the training material, and a Vietnamese non-governmental organisation was supported in implementing a PES system.

Involving civil society  from the start

However, it has become apparent again and again that efforts to conceive such plans to create alternative sources of income are frequently half-hearted. For example, in the community of Bantea Srey in Cambodia, the villagers had been retrained as vegetable growers by non-governmental organisations. However, there was a lack not only of installations required to store the water needed for this venture but also of knowhow, the participants in the scheme explained. The corresponding projects run by the district government were often poorly implemented, like in the case of a water reservoir, which was sited unfavourably and had started to leak hardly had it been built. Measures did not meet local requirements, and residents were not consulted or involved in activities.

This shows just how important the promotion of civil society groups for the political representation and advocacy of local interests is in the success of Integrated Watershed Management. In the cases reviewed, some representatives of government local authorities had been invited to training measures. But there had been no systematic, targeted support of civil society at local level. Local training and organisational consulting measures could lead to more local participation in the political process and hence to a use of finance focusing more on citizens’ needs and less corruption.

There have been reports from some discussion partners at local level in Vietnam on successful problem solutions involving all stakeholders. In Krong Bong District, there was a resource conflict between rice farmers and a hydro-electric plant. Damming and the spasmodic release of water complicated the systematic irrigation of the rice paddies further down the river. Following negotiations supervised by the authorities between the plant operators and delegations of rice farmers, spills from the power station were, albeit reluctantly, co-ordinated with the irrigation system of the farmers. One interview partner assumes that the resolution of the conflict was thanks to the civil servants taking influence.

Watershed Committees – a tiger without teeth?

So this successful co-ordination of conflicting users’ interests was not directly due to the setting up of the local Watershed Committees. It was not only in Vietnam that the effectiveness of the Watershed Committees, which after all are one of the central institutions in the IWSM concept, showed weaknesses. In Thailand and Cambodia, the members of the potential committees have already been chosen. But they have no money and “no stamps” enabling them to do their work, a WSC co-ordinator reports. While committees had also been set up in the pilot regions in Laos, their influence “beyond planning” had only been slight. Disputes between the two districts responsible for the watershed complicated an institutionalisation of the WSC in this case, and financing beyond the end of the project was not ensured. If the setting up of a WSC was successful, this frequently coincided with the involvement of strong leadership figures giving the committees sufficient clout. Recruiting such leaders at all levels was part of the project strategy.

It was with this in mind that consultations among the responsible ministries, e.g. of forestry, agriculture and water, took place at national level in National Working Groups (NWG). Key figures from the local, sub-national and national levels, some of them in senior positions, got together regularly in these committees to discuss national topics related to IWSM and exchange information. Thanks to their (unpaid) involvement in the NWG, these change agents were supported in contributing to a change in awareness in their authorities. Since the first decade of the new millennium, sets of regulations have been adopted in Cambodia, Laos and Vietnam that enable better co-ordination and planning in terms of IWSM. However, the evaluation also showed that without a formalisation and funding of the NWG by national authorities, no further support of the IWSM approach was provided by the NWG.

In spite of the poor effectiveness of the Watershed Committees, one is satisfied at district level with what has been achieved so far, above all with regard to awareness-raising and capacity development. Positive references are also made to advising the authorities on compiling recommendations on settling water use conflicts. A Thai civil servant explained that the concept of Watershed Management was already familiar. But through co-operation with the Germans in the context of the projects, the focus, which had previously been set more on technical solutions, had now been complemented by social aspects. In this manner, the role of the local population in planning and implementing IWSM measures was strengthened. Thus the potentials of the sustainable use of bio-resources in the watershed could be tapped more effectively.

The effectiveness and sustainability of the projects is also based on national training institutions such as universities as well as non-governmental education centres having been integrated in the training measures. There, the IWSM approach and the corresponding methods continue to be taught and adapted to local conditions. The authorities integrated in the projects carry on using IWSM-related methods, and one often hears of a commitment to involving all stakeholders in the watershed more strongly. Also, many interview partners praised the information portal mekonginfo.org that had been developed in the course of the project as well as the training material prepared on the basis of insights gained from the pilot regions. However, it was emphasised that this material had to be translated into the languages spoken by the ethnic minorities and, very much in line with the process-oriented IWSM approach, that it required continuous updating.

The example referred to at the beginning of this article shows that a lot still remains to be done. An interview later on revealed that the dyke that the discussion partners from Krong Bong District had applauded because it secured their harvests had in fact worsened flooding in neighbouring Lak District.

The Evaluation
Evaluating was carried out from July till November 2013 and was commissioned by the GIZ Unit for Monitoring and Evaluation in co-operation with the Centre for Rural Development (SLE) at Humboldt University Berlin. Two projects run by GIZ (Gesell­schaft für Internationale Zusammenarbeit, formerly GTZ and InWEnt) on Integrated Watershed Management were examined in Cambodia, Laos, Thailand and Vietnam: “Sustainable Management of Water Catchment Areas in the Lower Mekong Basin” (2002–2011) and “Potentials of Rural Areas in the Mekong Countries” (2005–2008).

The Survey
What has remained? – An ex post Evaluation of Watershed Management in the Mekong Region; can be downloaded from: http://edoc.hu-berlin.de/series/sle/254/PDF/254.pdf