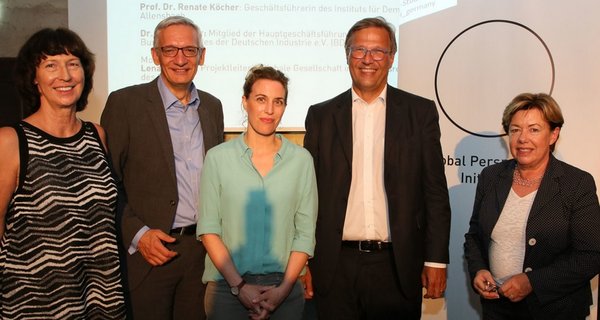 Africa plays a minimal role in German foreign trade. In 2018, trade with Africa totalled around EUR 45 billion. At the end of August, the think tank “Global Perspectives Initiative”, founded in Berlin in 2016 to support the UN Sustainable Development Goals, met with representatives of business and politics to discuss industry’s expectations of investment in Africa.

For the Berlin think tank Global Perspective Initiative (GPI), the Demoskopie Allensbach opinion research institute carried out a survey among top figures in German industry on the obstacles to and reasons for commercial engagement in Africa. At the end of August 2019 Dr Renate Köcher presented the results in Berlin and discussed them with Martin Jäger, State Secretary at the German Federal Ministry for Economic Cooperation and Development (BMZ) and Dr Stefan Mair of the Federation of German Industries (BDI).

In-depth interviews showed that industry wants a more differentiated reporting on Africa. Currently, critical developments in individual countries are improperly generalised. As a result, Africa is mostly regarded as a “danger zone”, and years of positive developments, such as the constant strong economic growth in western Africa, are overlooked.

In the first five months of 2019, German trade with Africa grew by over 12 per cent compared to the same period last year. According to GPI founder Dr Ingrid Hamm, German companies have only just started the process of discovering African countries. This is timely, since employment opportunities on this emerging continent are becoming increasingly important. Through investment, German industry can contribute to achieving the UN’s Agenda 2030.

By means of their commercial contribution, German companies are seeking to create an environment for general growth in Africa. Two-thirds of top managers regard this goal as “very important”, a further 29 per cent as “important”. A lack of growth in Africa would mean enormous migration to Europe.

Conflict between business and development?

Martin Jäger does not believe there is any conflict between business and development. The numerous BMZ initiatives, such as develoPPP or the G20 programme “Compact for Africa”, deliberately involve the private sector. Public development funds are not enough –“even if we’re not exactly a dwarf”. After the USA, the EU is the second largest development aid donor.

Europeans regard their role as different from that of China, which is also investing in Africa. “They’re investing in infrastructure and getting rights to resources in return,” as one businessperson comments in a survey interview. For decades, for example, Europeans have neglected to modernise the railway from Mombasa to Nairobi, while the Chinese took just two years, and are even supplying the train staff. However, Jäger did not mean to disparage Chinese engagement in Africa: “What the Chinese are doing in Africa isn’t all that bad.”

Political instability and corruption are the biggest obstacles

According to the survey, politicians tend to see investment as an opportunity, while industry tends to see the risks. Companies already active in Africa are significantly more positive about their opportunities. A lack of infrastructure or skilled labour is not seen as a major risk to investment. For over half the companies, political instability and corruption are the biggest obstacles. More than one third criticise local legal uncertainty.

Germany is currently working on a Nation Action Plan for Human Rights and the Environment, in order to make the international value chain sustainable for companies. Several EU countries have comparable value chain legislation, but they have individual priorities. Mair told rural21.com that these efforts are worthy approaches to development, but should not be overestimated. Major companies can create conditions for sustainability more easily than smaller ones.