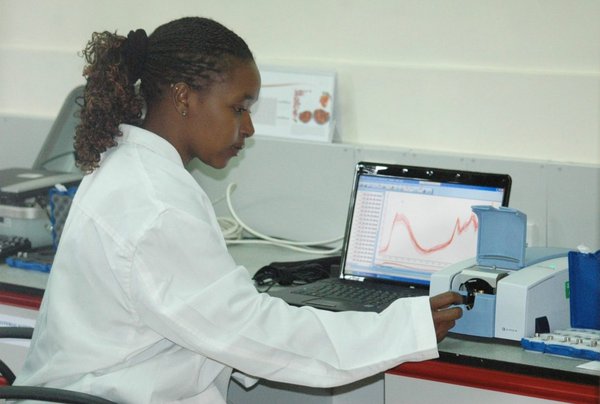 Soil spectroscopy equipment in use in Africa.@ ICRAF

ICRAF: A library to understand the soils of the World

A breakthrough in how soils are analysed, known as soil spectroscopy, is equipping both farmers and government decision-makers with a new tool in combatting land degradation and improving farmers' crop yields and income.

Farmland around the world is becoming increasingly degraded for a variety of reasons related to soil health. Unsustainable agricultural practices, often coupled with increased impacts of climate changes such as flooding, higher temperatures and drought, are seeing farmers experience more challenges, ranging from soil compaction to loss of soil structure, and from soil nutrient depletion to excess nutrient supply.

Soil spectroscopy analysis has proven to be faster, cheaper and more precise than conventional testing, giving agricultural producers at all scales vital information on how to improve their soils, in turn boosting crop yields and food production.

The technology uses infrared electromagnetic radiation to measure how much energy the soil surface reflects at specific wavelengths, providing what scientists call a spectral signature.

"That signature tells the mineral composition and the organic composition of the soil," says Keith Shepherd, principal soil scientist at World Agroforestry (ICRAF) and head of diagnostics and decision science at Innovative Solutions for Decision Agriculture (iSDA). "Put together, they are really what drives soil functions, the ability of the soil to supply nutrients, retain nutrients, hold water and resist erosion."

Under the umbrella of the Global Soil Laboratory Network (GLOSOLAN) of the Food and Agriculture Organization's (FAO) Global Soil Partnership and other partners, ICRAF has set up an initiative to establish a new global soil spectral library and estimation service.

Based at the United States Department of Agriculture's Kellogg Soil Survey Laboratory, the library will allow anyone in the world to either send in actual soil samples or submit online their own light reflectance scans to a centralized server that will, says Shepherd, "return estimates of a range of soil properties."

The calibration library will make it easier and cheaper for laboratories around the world to measure soil properties, he says, and the increased amounts of data will enhance digital soil mapping efforts. At the same time, the physical soil samples sent to the library will help it finetune its data on local conditions.

Farmers, meanwhile, will be able to see what is in their soil and what nutrients they need to add, or which soil-improving techniques to use. "And soil is so variable," says Shepherd. "Even in the same smallholder farm you can have five-fold differences in nutrient levels. So, you need this precision for profitable soil management."

What's more, national governments, particularly in developing countries, will be able to better plan their land management and conservation strategies.

"Governments need to monitor the health of their soil all the time, because it's such a vital resource," he says. "If the soils are eroding and they are losing quality due to poor land use, then they need to know that."

Using spectroscopic technology, nations can also take measures to protect soils that are not degraded. After all, catching early signs and preventing soils from becoming degraded in the first place is also a lot more cost-effective than restoring them.