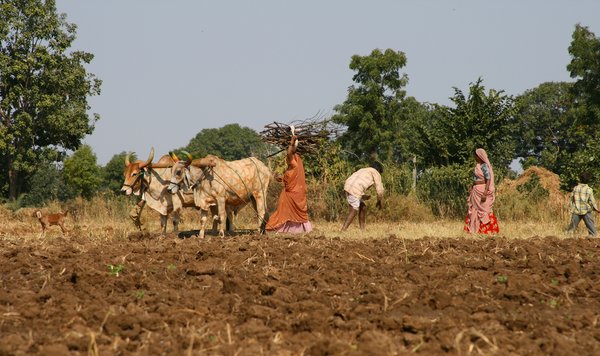 Particularly in many regions of India, women are threatened by hunger and malnutrition due to gender inequality, even though they are the persons responsible for food production.
Photo: © shutterstock

Human rights and food security – women are most at threat

Women in rural areas are among the population groups whose human rights and food security are particularly threatened by climate change. The German human rights organisations FIAN and terre des hommes are drawing attention to this on 8 March on the occasion of the International Women’s Day.

On the occasion of the International Women’s Day on 8 March, the human rights organisations FIAN and terre des hommes are calling attention to the specific discrimination against women in rural regions, which is being further worsened by climate change and global warming.

In a press statement, FIAN notes that in countries around the equator in particular, global warming is already resulting in an unreliable alternation of dry and rainy seasons, leading to harvest losses and lack of access to drinking and non-potable water.

“Women in rural areas are disproportionately affected by hunger. At the same time, women are generally responsible for feeding their families,” explains Gertrud Falk, officer responsible for gender equity at FIAN.  “From conditioning the seed through to cultivation and harvest, and the choice of the seed for the next season, the work of subsistence farming is mostly done by women.” In the countries of the Global South, women small-scale farmers grow 45-80 per cent of the food. They contribute to the adaptation and resilience of crops, in particular by preserving seed diversity.

FIAN sees a further threat to women’s living situation from the agricultural industry, which is exploiting climate change and climate policy to acquire more and more rights in natural resources, for example seed. “As seed corporations develop adapted varieties and use international and regional agreements to secure patents and plant-variety rights in them, women small-scale farmers in particular are losing their independence, and are forced to buy seed constantly,” Falk explains.

FIAN is accordingly taking the International Women’s Day as an occasion to call on the German Federal Government in compliance with the Paris Climate Agreement to do its utmost to limit climate change as much as possible, and to consistently implement the UN Declaration on the Rights of Peasants and Other People Working in Rural Areas.

The development policy child welfare organisation terre des hommes (tdh) for its part is drawing attention on International Women’s Day to the fact that girls and women all over the world are more affected by hunger and malnutrition than men and boys. Worldwide, 821 million people are living in hunger, 200 million in India alone, as tdh notes in its press statement, pointing to the 2018 report of the FAO, which shows that the share of women in Africa, Asia and Latin America affected by hunger and malnutrition is greater than the share of men.

“There are many reasons for hunger. A decisive factor is gender inequality and discrimination against girls and women,” explains Albert Recknagel, board spokesperson for tdh. Gender inequality poses a serious risk for girls in poor families.

This is apparent, for example, in the Indian federal state of Madhya Pradesh, where tdh is supporting pregnant women and infants. “One out of two women there is undernourished. Child mortality is enormously high, and girls are significantly more at risk than boys. 60 per cent of children dying from hunger and malnutrition are female, girls have a substantially lower likelihood of reaching the age of five,” Recknagel continues.

“The decisive factor is for women to have a say in decisions and get their fair share,” he stresses. “In Madhya Pradesh, the organisation is ensuring that 5,000 babies and infants and 3,000 pregnant women have enough to eat, and that the communities can secure their food in the long term through fruit and vegetable gardens. In the process, we are building awareness that girls and women are equally valuable, and shouldn’t wait to eat until the men have eaten to their full.”