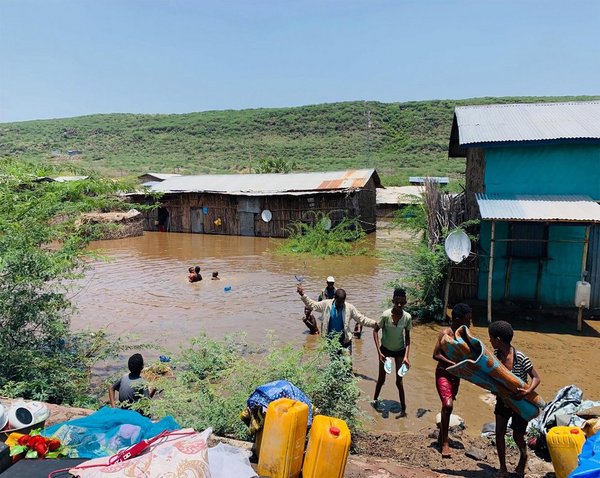 Persistent rainfall, as here in the Afar region of Ethiopia, has led to severe flooding in many parts of East Africa, where millions of people have been forced to leave their flooded homes.
Photo: ©Afar Regional DPFSP

People in Ethiopia, Sudan and South Sudan have been hit by heavy rainfalls over recent weeks. Farmland and pastures have been destroyed by the floods. The government of Sudan has declared a three-month state of emergency.

Particularly heavy rainfall has caused flooding in East Africa, Welthungerhilfe reported in September 2020. In Ethiopia, Sudan and South Sudan alone, around 2.5 million people have been left defenceless against the mass of water. With the plague of locusts and the coronavirus pandemic people's reserves have run out.

The situation is particularly dramatic in Ethiopia, where more than a million people have been affected: “This is the worst flood in living memory. Some villages have been waiting over a week for food aid. Farmland and pastures have been destroyed, a lot of livestock has drowned,” explains Matthias Späth, Welthungerhilfe Country Director for Ethiopia, the difficult situation.

People in Sudan are also experiencing a once-in-a-century flood, and the Nile has reached unprecedented levels. In mid-September, the government declared a three-month state of emergency.

The number of extreme weather events has doubled since the early 1990s. “We can see that the rain is increasingly starting too early, too late, not at all, or in great quantities, not just in East Africa, but also currently in the Sahel region and in South Asia. This has fatal consequences for farming and people's living conditions, which are already difficult,” says Bettina Iseli, Programme Director for Welthungerhilfe. “The weather has simply become unpredictable. The people worst affected by the extreme weather are those who bear least responsibility for climate change.”