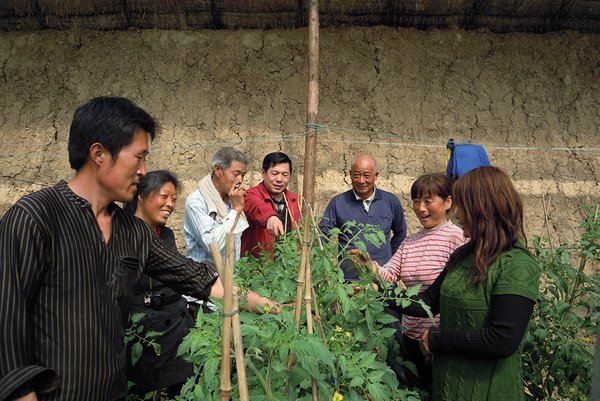 Farmer co-operatives in China – not exploited to the full

Co-operatives can strengthen the bargaining and market power of farmers, which is of particular importance for smallholders. In China, co-operative-style farmer organisations have evolved since the 1920s. And they have been given government support since 2007. Our authors have taken a look at the impact of these supporting policies and at which institutional challenges have become apparent after ten years.

Farmer co-operatives can optimise the allocation of resources and help small farmers extend their supply chains and gain more bargaining power in marketing. Therefore, they play a critical role in increasing farmers’ income, improving the quality of agriproducts, upgrading agro-technologies and promoting cultural heritage in rural areas. The Chinese government has recognised these advantages and has therefore been issuing a series of supporting policies for cooperatives in terms of preferential taxation, finance and sector development since 2007. 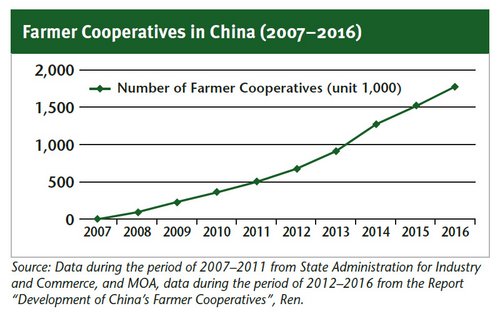 The first ten years following the promulgation of the law on farmer co-operatives witnessed their rapid development in China.

Taking the average 0.5 hectares of cultivated land per household, a crop co-operative produces crops and/or provides services in less than 30 hectares of farming land in China (rented land is included as well as the land transferred into co-operatives; here, services refer to selling agricultural materials and providing technical services to co-operative members).

About 80 per cent of co-operatives concentrate on crop farming and animal husbandry (see graph). 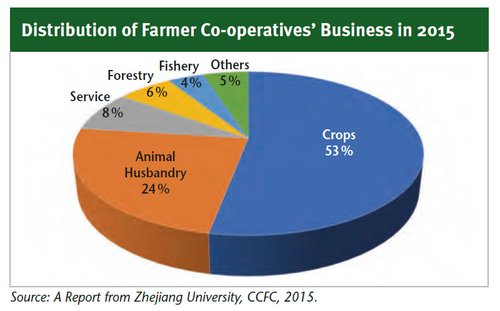 Compared with the initial period after the promulgation of the law, farmer co-operatives have been changing in the following three respects:
Diversified funding methods and co-operation modes: At the very beginning, only a small number of co-operative leaders contribute cash funding to co-operatives. Most farmer members either work in them or pay limited membership fees. With the development of co-operatives, membership funding approaches have been diversified in the form of either product, labour input or land management rights. This trend is closely linked with the phenomenon of “migrant farmers” as well as the reform of the collective property rights system in China. The farmers who have no liquidity to contribute financially can instead acquire shares of the co-operative by contributing land management rights. All farmer members, large or small, can thus proportionally share margins of co-operatives. Correspondingly, the primary model of “producing via families, serving through co-operatives” has been replaced with uniform production and profit sharing according to both land and capital shares within co-operatives.

Diversified business scopes: The Law on Specialized Farmers’ Cooperatives (National Law) defines that farmer co-operatives are “mutual-help economic organisations joined voluntarily and managed in a democratic manner by the producers and operators of the same kind of farm products or by the providers or users of services for the same kind of agricultural production and operation”. Most co-operatives were thus established by focusing on similar agricultural products in the beginning. Along with their further development, they have gradually diversified their business to avert market risks and save transaction costs.

Co-operatives to federations: In 2013, the State Administration for Industry and Commerce (SAIC) and the MOA issued a paper, allowing federations to register in SAIC. At present, over 7,000 federations have been registered in SAIC at different levels. Federations per se tackle the disadvantages of co-operatives, such as limited disposable capital, incomplete supply chains, and seasonal supply of agro-products. The development of the federations will surely increase the competitiveness of farmers.

Despite the dramatic growth of farmer co-operatives, they have encountered many challenges not only from internal management and external markets, but also from China’s institutional environment. Any flaws here can turn into big obstacles. Here are some examples.

Financing environment. Since co-operatives are in the initial stage of expanding their business, many of them need to invest substantially in fixed assets such as slaughterhouses, cold storage warehouses, processing and inspection facilities. Improved access to financing services, although mentioned in the National Law, is in practice difficult to realise for many co-operatives. In particular, profit-seeking banks prefer giving loans to industries with higher rates of return on investment or at least to clients that have demonstrated a strong ability to repay by holding assets. Farmer co-operatives generally cannot fulfil these criteria.

Therefore, many federations have emerged in recent decades through pooling member co-operatives’ assets. It is easier for such federations with relatively larger assets than individual co-operatives to obtain bank loans. In addition, with the progress of reform on rural property rights, it might become easier for individual farmers to acquire loans by mortgaging their land. But it is still an open question whether this rule will be true of co-operatives as well.

At the same time, there has been little progress of reform on the rural credit market, since relevant authorities have exerted stringent approval regulations to confine the potential risks within a limited scope. The informal credit market is thus still popular in rural areas. The Government has increased its efforts to conduct trial activities in this regard, although it will be a quite lengthy process as the reform on the rural credit market is the most difficult part of banking system reform in China.

Education and training system. Farmer co-operatives are urgently in need of a more practice-oriented education system and a professional training system. In China, those systems have not taken shape yet. The existing education system has been focusing too much on theoretical aspects, so that companies have to provide internal training to graduates after they are employed there. This applies especially to agricultural vocational schools in China.

Specialised training institutes and companies for farmer co-operatives have been emerging recently, but remain on a limited scale and confined to certain regions. Moreover, many government departments and institutes are involved in co-operative management and agricultural technology extension at different levels. They have carried out trainings on self-regulation, management skills and accountancy etc. according to relevant laws or policies. Meanwhile, professional marketing trainings are becoming increasingly important with the further development of co-operatives. Some institutes or companies are providing marketing trainings, but they are targeted mainly at retailers or staff members of big companies, and their fees are hence too high to be affordable for most farmer co-operatives. Accountancy trainings are provided by the government authorities, but this aspect is usually ignored by the co-operative directors because the co-operatives business is still quite small. The official accountancy is somehow too complicated, for most of the members are not so well educated or are even illiterate. Many co-operatives therefore prefer a simple internal financial record.

Auditing system. In China, there is as yet no compulsory auditing system for farmer co-operatives. The phenomenon has occurred that some co-operatives, shortly after registration, actually do not operate a business at all, having apparently been founded purely to seek governmental subsidies. Such practice has sometimes led to co-operatives gaining a bad reputation in society. Therefore, an auditing system needs to be established stepwise not only to avoid co-operatives being established without solid financial and human resources but also to identify and discourage foul play in practice. In addition, the audit is meant to protect the financial share of members and the financial interests of creditors. Experiences from other countries suggest that, in the absence of regular auditing, members often lack trust and confidence in the co-operative idea and thus in the financial feasibility of their co-operative, even if it is not in financial troubles.

Chinese co-operative-type farmer organisations have evolved against the backdrop of different socio-economic systems for more than 90 years (see Box). Historical experience proves that a bottom-up approach is the only way to achieve a sustainable development of co-operatives. The Chinese government has drawn lessons from this and has been trying to set up an enabling institutional system. In 2007, the National Law came into effect. Since then, farmer co-operatives have burgeoned. It has nevertheless turned out that continuous efforts are necessary to create a more favourable institutional environment; this includes adapting the National Law to current conditions, a deep reform of the rural credit market or even the banking system and altering the education and training system. Moreover, it is recommendable to step-by-step introduce an auditing system in the context of the rapid development of farmer co-operatives in China.

The co-operative movement began in Europe in the 19th century against the background of the industrial revolution and an increasing mechanisation of the economy. The industrialisation of China was prevented by the seclusive policies of the Qing dynasty and a long period of war in the 19th century. Only at the beginning of the 20th century was the concept of co-operatives introduced by some Chinese intellectuals, with the goal of helping poor people improve their economic situation on their own.

Senior Chinese experts in this field say that the whole history of farmer co-operatives in China can be roughly divided into three phases according to the socio-economic context and land ownership situation.

The years between 1920 and 1948 can be called “the era of rudimentary development”. During this period, large areas of land belonged to landlords, and many years of war, natural disasters and famine had made farmers extremely poor. The idea of co-operative organisation was therefore introduced into China to alleviate the abject poverty there. In 1923, the first co-operative, a credit co-operative, was founded. Many different types of co-operatives were established later on.

In the “era of reform and opening-up” from 1978 to date, the more market-oriented economy along with the Household Responsibility System(HRS) and family-based farming system have slowly permeated, further developed and started to be dominant in rural areas. HRS refers to the land being collectively owned by villages and leased to the households. The area of acreage every household can lease depends on the number of people in a household, as well as the average land area per capita in this region. The tenure specified in the contract was set to three years at first, extended to 15 years in 1984 and further extended to 30 years in 1993.

In particular, the Cooperative Movement in the 1950s had a negative influence not only on the development of co-operatives, but also on their general public perception. Therefore, the Chinese government has taken prudential attitudes towards promoting farmer co-operatives and has conducted a lot of pilot activities and research before promulgating the National Law. From the mid-to late 1980s, farmers’ professional associations (or farmer-specialised technology associations) and farmer co-operatives – both of which emerged as new types of farmer co-operative organisations – are often called “farmer professional co-operative organisations” in China. The term “professional” or “specialised” is the translation of the Chinese expression “专业” (zhuanye). Of the two, the farmer professional associations were the first to develop, as a farmers’ social organisation which mainly provided technology services. Farmer co-operatives, a legal entity running business for farmers, have by now become a popular form of farmers’ economic co-operation in China. The enactment of the National Law in 2006 was attributed to the fast development of co-operative-type farmer organisations in the 1990s. It systematically specifies a series of issues like “Definition of Farmer Co-operatives”, “Establishment and Registration”, “Membership”, “Organisational Structure”, “Financial Management”, “Merger, Division, Dissolution and Liquidation”, “Supportive Policies” and “Legal Responsibilities”. The self-proclaimed purpose of this law is to support and guide the development of co-operatives as well as to promote the development of agriculture and the economy of rural areas.