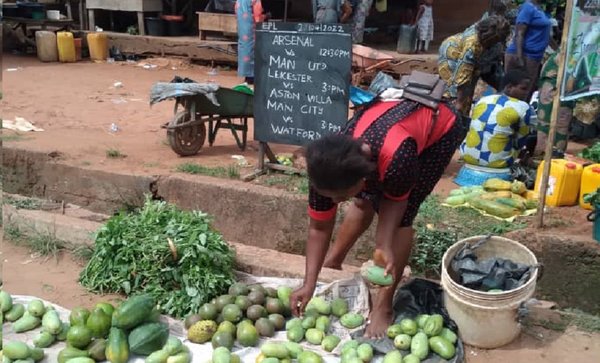 Fallen fruit for a living

In most poor and developing countries of the world, many families must find survival techniques because a large population has to cope with scarce resources and no help is provided by governments. Fruit scavenging is one of the most common surviving activities in the rural and poor communities in most African countries, especially in west and east Africa. A study says that bush mango (Irvingia spp) generates over eight million US dollars in Cameroon annually.

Most African fruits are tropical plants grown non-cultivated, i.e. naturally, by themselves. This factor of free growth has made the free picking of fruits common. African star apple, commonly known as Udala in the eastern part of Nigeria, is regarded as natural and spiritual fruit, and today, no-one is allowed to harvest it; you can only pick fruit which has freely fallen. The fruit is seen as a child by many people, although such belief has somewhat faded. Nevertheless, this culture has encouraged fruit scavenging in many communities.

Most fruit scavengers in Africa pick the fruit to eat or sell. It is not meant for international shipment. Most scavengers sell their fruit in the rural areas, although some go to the urban areas to make more profit, especially those who have enough fruit. Sometimes they also buy fruit from other scavengers to have enough to sell in the city. Even some urban dwellers now sometimes come to the rural areas to buy the fruit directly from the people. The fruit they are scavenging for is mostly perishable goods such as cashew fruit (seed and fresh), mango, palm nut, etc. Most of these fruits are picked up by the poor rural people in local areas within their reach.

Even though the collection of fallen fruit has a long tradition, it is not permitted everywhere. Most tropical plants owners do not encourage free picking of fruits on their land or plantation. Some put up signs warning scavengers not to do any fruit scavenging on their land. A scavenger caught by the owner will be charged by him, or the case is taken to the village authorities. So most scavengers look for and know the owner of the fruit and watch his activities to make sure when they can gather fruit undisturbed on the land. But these gatherers are often not content with the fallen fruit and also harvest ripe fruit from the tree or bush.

However, there are also areas where fruit picking is allowed because they are public plantations. This is the case e.g. in eastern Nigeria, where erosion is predominant. In Anambra state, for instance, there are more than 1,000 erosion sites, ranging in damage from low to high gully erosion. Many institutions, such as the University of Nigeria’s Soil Science Department, Nsukka, have conducted much research to help prevent and control erosion. One of the prevention and control techniques adopted is to plant cover crops like cashew plants, mango, bamboo, etc. in the erosion sites located at Idemili North and south of Anambra state, Nigeria. These plants help to check the devastating effects of erosion in the area, and also become a very good livelihood source for the people.

In these erosion sites, thousands of cashew and mango trees are now being harvested by the rural inhabitants. More than 1,000 people are benefiting from these cashew nut plant erosion sites. Different harvesting tools are used to prevent damage to the fruit, so that it is easier to sell.

Scavenging activities are growing each year because of the high income people make from them each season. The high cost of the cashew nut has promoted scavenging activities in erosion sites where the cashew plants are available. The scavenging activities have involved about 70% of the cashew plants, 20% of the mango plants, 5% of the palm nut and 5% of other plants. Scavenging has been a very big survival mechanism for people in the region and no-one likes to miss the opportunity, which occurs once a year. People join this activity because it is a business that you can start without capital, training, etc., and it provides some extra income. The result of each day's work is then some extra money to feed yourself and your family. During the harvest season, roadside markets are been established in various areas of the erosion control sites. They are closed down again after the harvesting period. The roadside markets help people easily sell their fruit without wasting money on transportation.

Miss Chioma Okeke is one of these scavengers. She lives in Nnobi in Idemili South (Anambra, Nigeria), which is one of the towns with erosion sites. Miss Okeke started in 2019, and in 2020 she made no less than € 609 within four months. Chioma Okeke said that she used the money to start up a vegetable business in her street. This scavenging of cashew and mango is seasonal, lasting mostly from December to May. After this time range, the business ends, and people continue with other survival strategies available to them. Even some university students are involved in this process to assist their parents in paying their school fees. Nobody claims ownership of the plants as the government keeps the erosion sites as reserved areas. However, the collection of firewood and the felling of trees is not permitted in the areas.

Competition is a problem

One problem for fruit pickers is considerable competition. Sometimes, getting ripe fruit becomes a struggle. Scavenger may resort to harvesting unripe fruit, like mangoes and they try to artificially post-ripen it because getting enough fruit keeps them ahead of their rivals. However, the quality of fruit which has been artificially post-ripened is much poorer than that of fruit that has grown to full ripeness on the tree.

Most fruit pickers are men between 15 and 40 years of age. Women are also involved, but they usually make less profit. There are several reasons for this. Men go deep inside the forest to get well-ripened fruits, while women can’t afford to do so because they are afraid of being raped or attacked. Neither is tree-climbing as easy as it usually is for men. Sometimes, however, several people join together to form teams to achieve good harvesting results. This way they can share the work, with men doing the tree climbing, shaking the tree, etc., while women do only the picking and selling of the fallen fruit. But even this approach sometimes brings problems. If the teams are not family members, disputes often arise over how to divide the money. Therefore, teams composed of family members are usually more successful. Some individuals in the fruit scavenging activities even disguise themselves as prank inside the forest to chase away the other people so that there are no competitors and they have enough fruit to harvest.

However, cultivations in the areas affected by erosion are threatened, for no methods can be applied to protect the existing plants. Old plants in such areas which bear hardly any fruit are not replaced. Many plants suffer from having whole branches cut off by fruit pickers during harvesting. This considerably reduces protection from erosion since new plants can hardly take root. The Nigerian government has to address this problem and contribute to protecting and conserving the erosion areas.