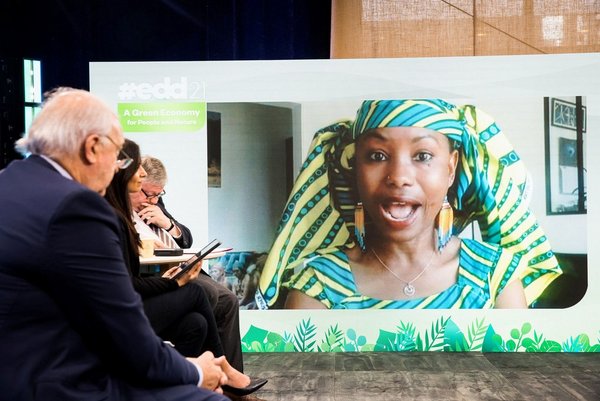 "We are the land experts and engineers. It is time for Northern countries to learn from us", Hindou Oumarou Ibrahim said in her video message.
Photo: European Commission

European Development Days 2021: “The Green Deal for a Sustainable Future”

The challenges of biodiversity loss, climate change and environmental degradation were at the centre of this year’s European Development Days (EDD).

What was new about this 14th edition of the event was not only that it was fully digital. This year, the opening ceremony, otherwise addressed by heads of state from all over the world, was handled entirely by 17 young people who participated – each with a focus on one of the topics dealt with – in the EDD Young Leaders Programme. Here and in the subsequent discussion rounds, they shared their expertise, ideas and ambitions for a sustainable future.

Putting farmers and local communities at the core of food systems

Biodiversity loss, overuse of freshwater systems, soil degradation – Nachilala Nkombo, Zambia Country Director of WWF, took the effects of our current food systems as an opportunity to call for a radical change in agricultural production. The government’s current agricultural policy in her country was export-oriented, focused on monoculture (maize), and encouraged the use of artificial fertilisers – i.e. the exact opposite of sustainability, Nkombo explained. In order to achieve food security for the population while conserving the natural resources, in future, food systems ought to be in the hands of local communities; farmers should have a certain level of control of input use; in addition, they ought to be enabled to benefit from local knowledge und have more than one income stream.

Hindou Oumarou Ibrahim, founder and President of the Association for Indigenous Women and Peoples of Chad (AFPAT), explained how such a system could work in practice. In her country, conflict over access to fertile land is one of the biggest obstacles to sustainable land use. Land tenure was not clearly defined, and land grabbing was assuming drastic dimensions, both internally (by political elites) and externally (by big companies), Ibrahim reported. For example, this had become apparent at Lake Chad, where fences were cutting off the migratory routes
for transhumant shepherds and their herds.

One of the activities AFPAT is involved in to mitigate resource-based conflicts is participatory land mapping. In addition, the organization is lobbying local authorities to ensure that each woman is given a piece of land. The women have to manage this land according to agroecological principles, e.g. by planting trees and cultivating seasonal crops beneath them. Thus income for women, resilience to climate change, access to land and ecosystem restoration are combined. Charles Goerens, Member of the Committee on Development of the European Parliament, supported Ibrahim’s call for considering the rights of the communities more strongly. Goerens reminded the meeting that community rights over land were hundreds of years old. It was up to national governments to become active here and, for example, prevent foreign land grabs.

Eight priorities for the EU and its partners

In the closing ceremony of the EDD, a high-level group of 13 international scientists and practitioners proposed eight recommendations on how the EU and its partners can address the biodiversity and climate crises, whilst ensuring green growth for people around the world:

The recommendations are to feed into the ongoing negotiations for a future global biodiversity framework to be adopted at the 15th Conference of the Parties to the UN Convention on Biological Diversity (COP15), to take place in Kunming, China in October of this year.

For a systematic transformation of all economic sectors

So is everything on track regarding biodiversity? Not at all, says Christian Schwarzer, Founding Member of the Global Youth Biodiversity Network. His organisation, representing around 600 youth organisations from all over the world, has already participated in six rounds of negotiations on the CBD. “I’m so tired of hearing that we failed once again the targets that we have all agreed on,” Schwarzer complains, noting that what is lacking is policy coherence, clear actionable ideas, access of youth, grassroots organisations and indigenous communities to funding mechanisms and legally binding definitions of what nature-based solutions really are – so that they can really achieve results in linking combating global warming and biodiversity conservation. Schwarzer maintains that a systematic transformation of the entire economic sector, in which gender and intergenerational equality is immanent, is needed. “I want you to fight for biodiversity as if the life of your beloved family were at stake!” he called on the conference participants.