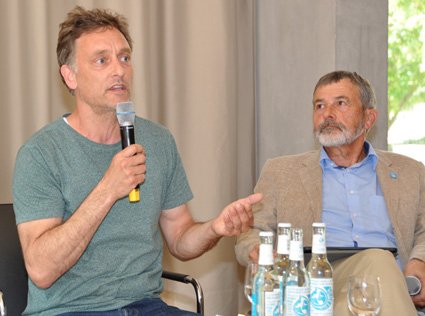 Doing justice to the oceans

On the occasion of World Oceans Day, German NGOs discussed the difficult balance between using and protecting the marine ecosystem.

Overfishing and dying coral reefs, rising sea levels and deep sea mining, plastic waste on the beaches and built-up shore areas – competition for the marine natural resources and the impacts of global commodity flows are putting increasing pressure on the marine ecosystem. It was this aspect, together with the 25th anniversary of the United Nations Convention on the Law of the Sea, UNCLOS, that prompted the organisations Forum Environment and Development, Fair Oceans and Bread for the World to discuss the difficult balance between using and protecting the marine ecosystem in the run-up to World Oceans Day, the 8th June.

The deadly trio of warming, acidification and lack of oxygen

Opening the event in Berlin, Hans-Otto Pörtner, a scientist at the Alfred Wegener Institute in Potsdam/Germany, gave a brief summary of the state the oceans in times of global warming. “Presently, global warming is the chief driver of changes in the oceans,” biologist Pörtner said, using various climate scenarios to demonstrate the impacts of the “deadly trio” of warming, acidification and lack of oxygen: the dying of warm water coral reefs, changes in the Jetstream resulting in extreme weather events, the compression of habitats for fish … “If we do not succeed in limiting global warming to a maximum of 1.5 degrees Celsius, we won’t be able to achieve SDG 14,” Pörtner warned. Drastic reductions in emissions – not only of CO2, but also of methane, nitrogen oxides and soot – were just as vital as stopping subsidies for fossil energy sources and a general reallocation of investments in the energy sector. However, social inertia and political inactivity were juxtaposed to the urgent need for action, Pörtner maintained. Furthermore, many countries using oceans had not considered the aspects of this habitat in their policies at all.

More than two thirds of the partner countries in German development cooperation are island or coastal nations. Ninety per cent of the people working in the fisheries sector live in developing countries. Ulrike Haupt, Head of the Environment Division at Germany’s Federal Ministry for Economic Cooperation and Development (BMZ), presented two initiatives with which the latter’s Ten-point Plan of Action on Marine Conservation and Sustainable Fisheries is to be implemented: the Blue Action Fund, financed with 55 million euros (Sweden, contributing eight million euros, and France, providing five million euros, are partners – “further partners are welcome!” Haupt stressed) and the Initiative “Save our Mangroves now!”. With the latter programme, efforts are being made to draw attention among partner countries to the considerable significance of mangroves. The Blue Action Fund enables measures such as the establishment of marine protected areas (MPAs) across São Tomé and Príncipe or the setting up of community-managed MPAs for inshore small-scale fisheries in Mozambique in cooperation with non-governmental organisations.

This kind of artisanal – and usually coastal – fishery accounts for 21 per cent of the roughly 80 million tons of fish fetched from the sea annually by the roughly 270 million fishers in capture fishery (commercial fishery: 75 %; subsistence: 3 %; sport fishery: 1 %). In addition to the pollution of the seas and the building up of ports, with their negative impacts on coastal ecosystems, these small-scale fishers in the Global South are above all under pressure from distant water fisheries, and also owing to the fact that more and more fishers are seeking a good catch with more and more effective material and equipment.

The West African nation of Senegal, for instance, had three million inhabitants in 1960, and now has 15 million, while the number of boats has increased threefold over the last 15 years. “But one can’t generally speak of an overfishing of the seas,” said Werner Ekau of the Leibniz Centre for Tropical Marine Research (ZMT). “Just like in Senegal, overfishing is often a regional or species-specific problem.” Frequently, small stocks were affected, whereas large, well-monitored stocks – such as herring or cod – were not presenting any problems. And that, for instance, cod no longer occurred off the Norwegian coast, was not the fault of the fishers but was due to climate change causing a shift in whereabouts certain species were located.

Ekau maintained that training fishers and better information for fishery cooperatives, e.g. on spawning seasons and locations of various species, were essential for them, for instance so that they could protect certain areas over certain periods. “But the most important aspect is better policies,” the marine expert stressed. “We need rules and monitoring.” Fishing licences were often awarded to clans and families, while individual small fishers were left empty-handed.

There was one item that the participants of the event agreed on. It would not be possible to conserve the marine resources in the long term without designating protected areas. Furthermore, protecting and using the seas need not be mutually exclusive. Regarding food sovereignty and the human rights-based approach, Carsten Pedersen of the Transnational Institute recommended that fishers be integrated in designating MPAs right from the start. Frequently, however, the organisations involved focused on an ecocentric approach. There had been a mere five fishers among the 1,500 participants in the recent conference of the International Union for the Conservation of Nature (IUCN) on MPAs. “We cannot come with our Northern ideas and tell people what they have to do,” Pedersen maintained. People in the Global South must not be regarded as objects, neither by donors nor by NGOs, he added.

Facts and figures on marine areas

-90 per cent of global cargo transports are performed via the sea;

- 40 per cent of the oceans are Exclusive Economic Zones (EEZ); in these areas, which stretch from the baseline out to 200 nautical from the coast, in accordance with the United Nations Convention on the Law of the Sea, the respective countries hold the exclusive right to explore and use marine resources, including energy production from water and wind;

- About 80 million tonnes of fish is fetched from the sea in capture fishery each year;

- Around 100 million tonnes of fish are bred annually in aquaculture, the lion’s share of them in China;