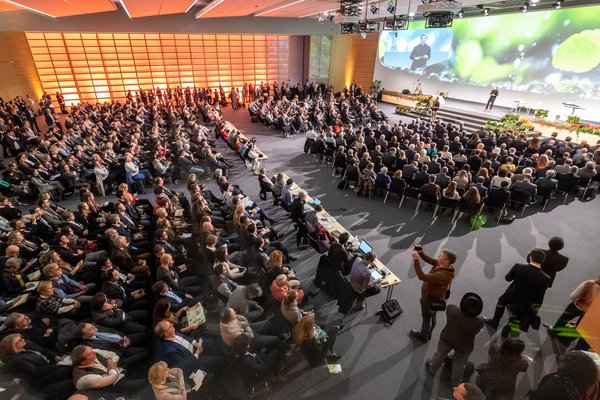 Diet for a green Planet

Western diets are not transferable to what will soon be ten billion people, for there are simply not enough water resources and spaces of arable land to support such a population. Experts discussed prospects for a sustainable and healthy nutrition style at the BioFach in Nuremburg, Germany.

At the BioFach Trade Fair for Organic Farming held in Nuremberg, Germany, in February 2019, experts discussed what nutrition options would be available under sustainable production conditions for a growing world population in the future.

The so-called Western Diet, with lots of meat and high levels of resource consumption, is establishing itself world-wide as economic development progresses. Carola Strasser of Münster University of Applied Science in Germany demonstrated this with shares of income spent on eating out. In East and Southern Africa, 15 per cent of household income is spent at canteens and on the catering trade in general. In Germany, this share is at 33 per cent, and in the USA at a hefty 50 per cent. These figures also show that private and public canteens, refectories and other facilities reach out to a considerable proportion of the population. Nutrition interventions have a significant impact on public health in this area.

According to Susanne Bügel of the University of Copenhagen, Denmark, a Nordic diet comprising more fruit, more sea fish and more berries gathered in the wild would be recommendable. Additionally, at least 75 per cent of the food ought to be of organic origin since it would then contain less residual pesticides and other harmful substances.

Jostein Hertwig of the initiative “Building Ecological Regenerative Agriculture and Societies” (BERAS) gave an account of the research project “Diets for a Clean Baltic”. The aim of the two-phase project, run from 2003 to 2013, was the compilation of a regional diet the production of which requires significantly lower levels of fertiliser nutrient. With its “Diet for a green Planet”, the initiative is attempting to implement a change in food patterns along the entire value chain, right down to the level of agriculture. Hertwig by no means stands alone with this endeavour.  Last year, the EAT Lancet Commission, consisting of 30 scientists, presented a healthy diet coming from sustainable agricultural production systems. It roughly corresponds to the notions of the Food and Agriculture Organization of the United Nations (FAO) and the World Health Organization (WHO). The systemic approach is said to be transferrable to the whole world.

Hertwig demanded that “homo economicus” be replaced by “homo econologicus”. Whether a diet really had to be organic was of secondary importance. Stressing the latter aspect meant immediately excluding some people from further debate. However, in the further course of communication, the organic approach could be presented as the better one.

Strasser maintains that radical change in the agricultural and food sector requires both top-down and bottom-up strategies, starting out from agriculture as well as from the consumer side, and incorporating voluntariness through information and education and regulations on feeding the community. Ultimately, scientists still lack the data on what drives people to compile diets in certain ways, maintains Susanne Bügel. Among young people, the prime force is the environmental aspect.

True cost models pursue an entirely different approach in which the negative environmental impacts of production and processing are factored into the food price. All too often, the healthier alternatives happen to be the more expensive ones. Bügel therefore rejects the introduction of a sugar tax and instead advocates making the healthier alternatives better value for money by reducing the tax. Hertwig adds that only the individual constituents are really good value, and holds that if an entire diet is judged in terms of nutrients and health requirements, healthier food turns out to be no more expensive than conventional instant meals. He also opts for co-operating with the major food corporations, stressing that without actors addressing them too, there will be no change in the food sector.