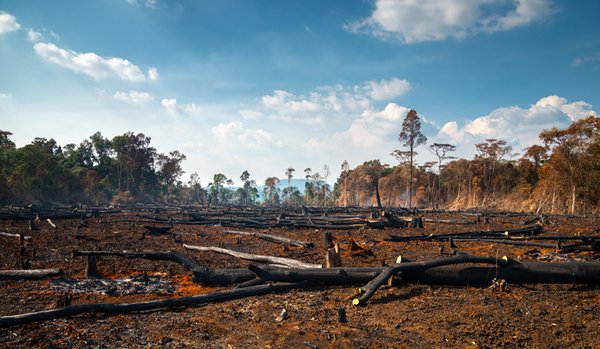 Illegal deforestation in a forest in Laos.
Photo: ©Thammanoon Khamchalee/Shutterstock

Over the past seven years, nearly two thirds of tropical forest loss in Latin America, Southeast Asia and Africa was driven by commercial agriculture. A major share of this loss was caused by illegal forest clearing.

Between 2013 and 2019, 77 million hectares of tropical forest were lost in Latin America, Southeast Asia and Africa. Sixty per cent of these losses – 46.1 million hectares – can be traced back to commercial agriculture. And roughly 70 per cent of this forest conversion for agricultural purposes is a result of unlawful clearing. This is demonstrated in a survey by the non-profit organisation Forest Trends.

Regarding the figures, it has to be borne in mind that many countries fail to report data about illegal deforestation and that reliable country data is often scarce, the researchers point out.

According to the report, the degree of unlawful deforestation varied widely between regions. In Latin America, 88 per cent of agro-conversion was conducted in violation of national laws and regulations, while in Africa the figure was 66 per cent, and in Asia 41 per cent.

Whereas in Indonesia, 81 per cent of clearing for palm oil – the country’s main export commodity – is estimated to be illegal, in Brazil, pasture for cattle breeding and soy cultivation are the main drivers of illegal deforestation. However, other commodities such as cocoa, rubber, coffee and maize are also cited as drivers.

The authors point out that illegality goes hand in hand with corrupt government systems, especially in Brazil and Indonesia. And they point to the crucial role of forest clearing in climate change. According to the report, emissions from illegal agro-conversion account for more than 2.7 gigatons of CO2  per year – more than India’s emissions from fossil fuels in 2018. The researchers also draw attention to the responsibility of consumers in importing countries.