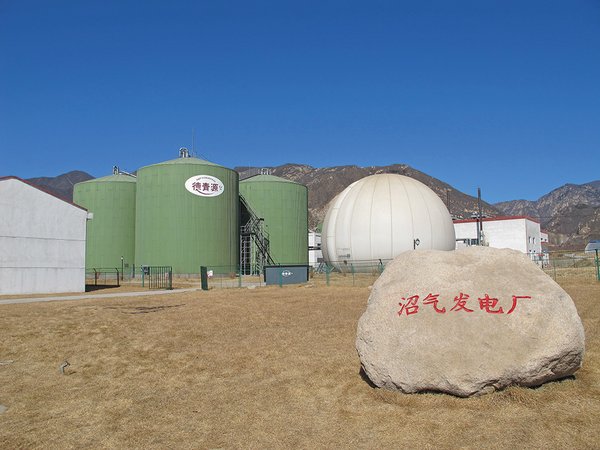 Most large-scale biogas plants are financed by the farmers themselves and tailored to the respective amounts of waste produced.
Photo: Sino-German Biomass Project (FECC/GIZ)

China has a longstanding tradition of using biogas for decentralised energy supply. Already, there are nearly 42 million household digesters in the rural areas, a figure set to double by 2020. But the country has even more ambitious plans. In order to achieve its own climate targets and raise the share of renewables in overall energy supply to 15 per cent by 2020, it wants to set up 16,000 middle- and large-scale biogas plants. However, implementation isn’t quite so easy.

China, with its abundant resources of biomass, has great potential in biogas production. Already in the 1950s, under Mao Zedong, the nation-wide application of household digesters was heavily encouraged to develop decentralised energy supply for remote rural areas. Since then, China’s political decision-makers have continued to foster the further utilisation of household biogas applications. So far, about 41.6 million household digesters have been installed in rural areas, the target being 80 million by 2020. These not only supply clean cooking gas, but also create considerable sanitary and health benefits for the rural population by treating their agricultural and household waste.

Since the 1990s, China has put more emphasis on environmental protection and supported the construction of larger biogas plants with technologies such as USR (Up-flow Sludge Reactor), UASB (Up-flow Anaerobic Sludge Blanket) and conventional HCF (High Concentration Flow) to treat liquid waste from livestock or food processing industries as well as from alcohol and beer production. The energetic use of the available biomass was considered more of a side effect and was only marginally utilised at this time. During the last decade, China’s approach towards biogas has changed given on-going economic growth and the related need to develop energy resources of all kinds.

The Chinese government aims to cover 15 per cent of its primary energy demand by renewable energy sources by 2020. Here, bio-energy can contribute to the diversification of the renewable energy mix and support a stable base load power. It not only contributes to rural development and decreases local environmental pollution as well as the greenhouse gas emissions but also supports overall development towards a sustainable low-carbon circular economy.

The government states that by the end of 2010, about 45,259 small-scale and 27,436 middle and large-scale biogas plants (digester >50 m3) existed with a digester capacity of 8.57 million m3 and an annual biogas output of 1.05 billion nm3 throughout the Chinese biogas sector. This includes 4,641 biogas plants with digesters of more than 300 m3. However, middle and large-scale biogas plants, which are explicitly developed for energy use, and not solely for anaerobic treatment of wastewater, have only emerged in recent years. In order to utilise the various positives effects and application potentials of bioenergy, the Chinese government has set ambitious goals for its biogas sector. As part of its medium and long-term development plan for renewable energy from 2006 to 2020, the National Development and Reform Commission (NDRC) aims to create 10,000 middle and large-scale biogas plants in the livestock industry and 6,000 industrial wastewater treatment plants with an overall biogas yield of 14 billion nm3 biogas, realising an installed electric capacity of three gigawatts.

During the last ten years, climate change mitigation emerged as an additional development driver of China’s biogas sector. As part of its greenhouse gases emission reduction policies, China signed the Kyoto Protocol in 2002. During the 11th Five-Year Plan, the Chinese government achieved a 20 per cent reduction of CO2 emission per unit of Gross Domestic Product (GDP). A total of about two trillion Chinese Yuan (CNY) – 240 billion euros – was invested to achieve this goal. In the course of the Copenhagen UN Climate Change Conference 2009, China then announced its 2020 voluntary targets of reducing the intensity of CO2 emissions per GDP by 40 to 45 per cent compared to 2005 and increasing the share of non-fossil fuels in primary energy consumption to around 15 per cent by 2020.

Making use of a huge potential

Current estimates indicate that usable biomass resources in China alone have the energetic potential to cover about five per cent of China’s primary energy. The combined energetic potential of crop residues, energy crops, animal manure, urban household waste and wastewater sludge will lead to a future biogas potential of about 440 billion nm3 in 2030, or an installed capacity of about 71 GW. According to current estimates of the total yearly biomass energy potential in 2030, crop residues, including by-products, will represent the largest share at 50 per cent of the total biogas potential. Cultivated energy crops on marginal land are estimated to reach 40 per cent of the total biomass energy potential by 2030. Animal manure could contribute nine per cent of the future biogas energy, while simultaneously reducing environmental pollution in rural areas. Biodegradable and municipal sewage waste could add another seven and three per cent respectively.

Regarding the Chinese greenhouse gas (GHG) emission reduction goals, the utilisation of the described biomass resources as a substitute for fossil fuels as well as through replacing chemical fertiliser through biogas plant effluent as organic fertiliser is estimated to lead to a yearly emission reduction potential of CO2 equivalents of 4.75 billion tons by 2020 and seven billion tons by 2030.

In order to increase the overall capacity of its biogas sector, the Chinese Ministry of Agriculture (MoA) invested more than 24 billion Chinese Yuan (CNY) from 2000 on via construction subsidies for biogas plants. These subsidies covered up to 50 per cent of the total investment and were granted to the respective investors, who are typically also the owners of large-scale agricultural enterprises. Since biogas plants, such as complete stirring tank reactors (CSTR), are generally more costly than traditional wastewater treatment plants, the construction subsidy was intended to create an opportunity for farmers to become energy producers instead of just treating their waste. Additionally, in accordance with the Renewable Energy Law from 2006, feed-in tariffs were set at 0.25 CNY/kWh (0.03 EUR/kWh), on top of the local coal power generation price. In order to receive the financial benefit, a minimum of 500 kWh installed capacity has to be fulfilled to gain access to the grid. But since the connection to the grid comes with great efforts and costs for the national grid operator in most cases, there have only been four successful cases in China so far.

With hardly any opportunities to sell the energy generated to the official grid, this lack of access to the energy market led to an overall underperformance of the existing biogas plants. However, since the construction subsidy was in place, the farmers saw the opportunity to minimise their costs to treat their agricultural waste by investing in the subsidised technology “biogas”. Even though this resulted in a construction of a great number of plants, their operating performance rate was very low. Looking at estimations of the financial feasibility of biogas plants in China, under consideration of a realised grid connection as well as the existing feed-in tariff as an additional revenue stream, this amount was obviously too low and would not provide enough support to enable a financially feasible biogas plant. Hence the Chinese policy-makers developed a variety of adjustments to the existing support policies to further enhance biogas sector performance.

One aspect was the establishment of a new category of “super-large” biogas plants with a fermenter volume of more than 5,000 m3. Rarely realised in China so far, these large-scale applications are now moving into the focus of the future development to apply high-tech technology solutions in a most efficient technical and financial way.

Further, the concept to support the initial investment through a construction subsidy is losing its traction and thus, the political discussion is increasingly focusing on a performance-oriented output subsidy. The currently discussed support scheme considers a subsidy of up to 0.9 CNY per produced nm3 biogas to create a strong financial incentive for the biogas producers to increase and optimise their biogas production. Still, this kind of subsidy scheme requires a centralised monitoring system that not only provides detailed and reliable data on the actual biogas production of each individual plant, but also resists attempted fraud. Looking at examples from Europe, China is currently developing such a system. It is expected to operate soon. Regarding the lacking access of biogas plants to the official electricity grid, the national state operator vowed in February 2013 to surpass the original goal and foster the connection of not only larger and super-large biogas plants, but also smaller biogas applications throughout China.

In the meantime, the Chinese biogas sector also started to develop its own solutions to overcome existing market barriers. The sector’s stakeholders are increasingly focusing on the purification of biogas to produce biomethane to be fed into the official gas grid, or even into self-operated mini-grids, supplying gas to the surrounding rural and small-town households. Here, the Minhe Phase II biogas plant in Penglei, Shandong province is a prominent example. With membrane purification technology, a most innovative approach in China’s biogas sector, Minhe II aims to process 60,000 nm3 biogas per day into biomethane, which shall serve as a substitute for natural gas vehicle fuel. This approach offers independence from the national electricity grid while promising higher revenues than electricity production since natural gas is far more expensive than electricity in China. That is why purified biogas can generate higher revenues for the individual biogas plants without limiting access to the currently discussed performance-oriented subsidy scheme, based on biogas output.

Changes already made in the political framework as well as the adaptations currently under discussion promise to have a positive effect on the overall development of the Chinese biogas sector. This will increase the installed capacity, technical sophistication, output-oriented efficient operation and financial feasibility of investing in a biogas plant. Options for business and research co-operation are expected to increase given the on-going strengthening of international agreements, offering a benefit for the Chinese biogas sector as well as for foreign enterprises entering the Chinese market. The new developments also offer the opportunity to make more use of resources such as energy crops from marginal land or the creation of additional products such as biogas plant effluents as organic fertiliser.
Not only can the utilisation of agricultural waste as energy resource contribute to environmental protection, but it also bears the potential to support the development of a stable energy supply to rural areas and can therefore serve as important driver of their further economic development progress.

China is establishing bilateral co-operation approaches aiming to maintain the link between the Chinese biogas sector and the rest of the biogas world in order to foster the knowledge exchange and adapt international experiences to Chinese conditions. For example, the “Sino-German Biogas Cooperation” based on a memorandum of understanding between Germany and China aims to establish a variety of mechanisms such as a Sino-German biogas research and development centre, a co-operation platform for Chinese and German biogas business operators, a Sino-German demonstration biogas plant, the elaboration of international norms and standards for biogas and bilateral exhibitions on biogas innovations. Establishing these long-term approaches is intended to strengthen co-operation between the two countries in the field of biogas, which is expected to result in a further capacity development of the Chinese stakeholders and business opportunities for the private sector.

The link between education and the actual performance of biogas plants has also been targeted by China’s policy-makers, who are focusing on training qualified staff. A curriculum for the professional education of large-scale biogas plant technicians was developed in 2013 to support efficient biogas production in the future. During the development of the curriculum, the Chinese legislator was assisted by international experts as well as Deutsche Gesellschaft für Internationale Zusammenarbeit (GIZ), who were engaged in the compilation of the curriculum itself and in running initial first trainings. About 300 technicians have since been trained.