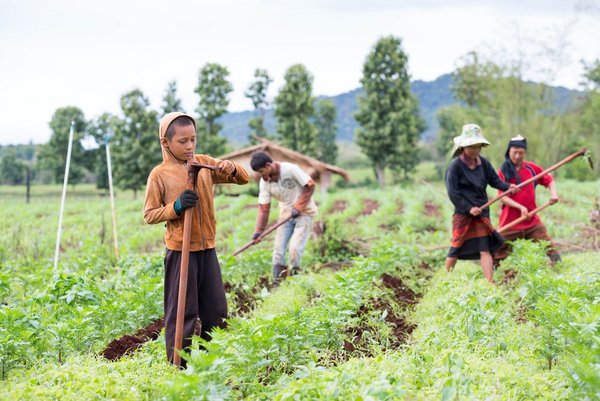 The Convention on the Worst Forms of Child Labour has now been ratified by all member states of the International Labour Organization. Child labour is particularly abundant in agriculture.

Adopted 21 years ago by the International Labour Conference of the International Labour Organization (ILO), Convention No. 182 on the Worst Forms of Child Labour has now been ratified by all of the ILO’s 187 member states. “Universal ratification of Convention 182 is an historic first that means that all children now have legal protection against the worst forms of child labour,” said ILO Director-General Guy Ryder, having received the ratification instruments from Titilupe Fanetupouvava’u Tivakano, Ambassador for the Kingdom of Tonga. Ryder maintained that ratification reflected a global commitment that the worst forms of child labour, such as slavery, sexual exploitation, the use of children in armed conflict or other illicit or hazardous work that compromised children’s health, morals or psychological wellbeing, had no place in society.

Convention No. 182 is one of the ILO’s eight Fundamental Conventions, which cover the abolition of child labour, the elimination of forced labour, the abolition of work-related discrimination and the rights to freedom of association and collective bargaining. Ending child labour is also addressed in Target 8.7 of the United Nations Sustainable Development Goals. The ILO is to lead the International Year for the Elimination of Child Labour in 2021, aiming at raising awareness of the issue and promoting progress towards agreed goals.

While the incidence of child labour dropped by almost 40 per cent between 2000 and 2016, the ILO estimates that there are still 152 million children in child labour, 73 million of whom are in hazardous work. And it notes that progress in eliminating child labour has slowed in recent years, particularly among the youngest age group of five to seven year olds. The ILO warns that the COVID-19 pandemic could even lead to a potential increase in child labour for the first time in 20 years if appropriate action is not taken.

Seventy per cent of all child labour takes place in agriculture

While the majority of all child labourers, 67.5 per cent, are unpaid family members, this percentage is even higher in agriculture, according to the ILO. And it tends to be combined with very early entry into work, sometimes even between the ages of five and seven years. Also, agriculture is one of the three most dangerous sectors in terms of work-related fatalities, non-fatal accidents and occupational diseases. Around 59 per cent of all children aged between five and 17 years working in hazardous conditions are in agriculture.

Poverty is the main cause of child labour in agriculture, although limited access to quality education, inadequate agricultural technology and access to adult labour, high hazards and risks as well as traditional attitudes towards children’s participation in agricultural activities also play a role. The ILO notes that especially in the context of family farming, small-scale fisheries and livestock husbandry, some participation of children in non-hazardous activities can have a positive impact as it contributes to the inter-generational transfer of technical and social skills as well as children’s food security. The organisation distinguishes between light duties that do no harm to the child and child labour, which it defines as work that interferes with compulsory schooling and damages health and personal development. Here, distinguishing criteria are based on hours and conditions of work, a child’s age, activities performed and hazards involved. Age-appropriate tasks that are of lower risk and do not interfere with a child’s schooling and leisure time can be a normal part of growing up in a rural environment. The ILO stresses improved self-confidence, self-esteem and work skills as attributes often detected in young people engaged in some aspects of farm work.