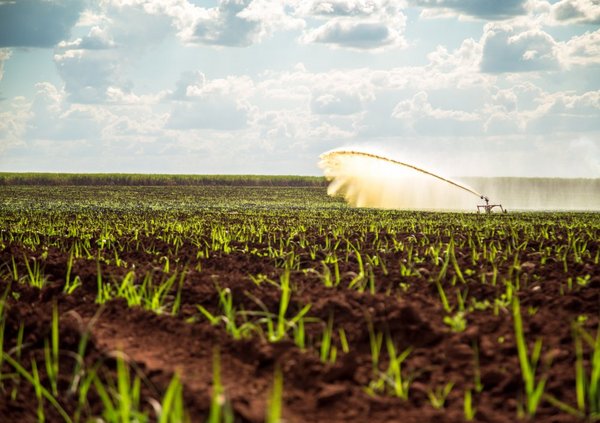 Irrigation of a sugar-cane plantation. Many regions are already facing water stress and non-sustainable water use for biomass and CCS is extending it to new regions.
Photo: ©mailsonpignata/Shutterstock

Climate plantations can contribute to achieving the Paris climate goals. Carbon dioxide is captured in biomass plantations and subsequently stored in the soil (Carbon Capture and Storage – CCS). However, bioenergy from biomass plus CCS requires water resources to cultivate the plants which may run up against natural limits.

As part of the Young Scientists Summer Programme (YSSP) of the International Institute for Applied Systems Analysis (IIASA) in Laxenburg near Vienna, scientists studied the water stress caused by worldwide cultivation of biomass and what solutions are available.

“Irrigation without sustainable water management for the future cultivation of biomass could - in combination with population growth - double global water stress by the end of the century,” says Fabian Stenzel of the Potsdam Institute for Climate Impact Research (PIK), commenting on the study which appeared in “Nature Communications”, March 2021.

Sylvia Tramberend of IIASA explains what sustainable water management involves. Policy makers must attach a price to water use and ensure distribution of water resources. On farms, intelligent irrigation technologies must increase production per unit of water, thereby reducing water withdrawals from rivers and lakes. Construction of rainwater cisterns and mulching fields to reduce evaporation from the soil surface are other options, as well as ensuring unrestricted water outflow in healthy ecosystems in and along rivers. Transnational rivers in particular require supraregional agreements for equitable water use. In addition, individual water users, such as industry, agriculture and the population, must have equitable access to the resource “water”, Tramberend explains.

Simulations for the study calculated that six million square kilometres worldwide are needed for biomass for bioenergy. As PIK’s Dieter Gerten explains, this would make it possible to achieve the Paris climate goal of limiting global warming to 1.5°C. By applying existing irrigation policies and technologies, the number of people suffering from water stress would double. There is no way to avoid this. However, sustainable biomass cultivation plus CCS could reduce the increase to 60 per cent. According to Gerten, water use would still be a challenge.

Water stress already exists in the Mediterranean regions, the Middle East, northern China, and south-east and south-west Africa. Non-sustainable water use for biomass and CCS is extending water stress to new regions, such as the eastern part of Brazil and large areas of sub-Saharan Africa. Water use is a prominent issue in every scenario, as PIK’s Wolfgang Lucht notes.