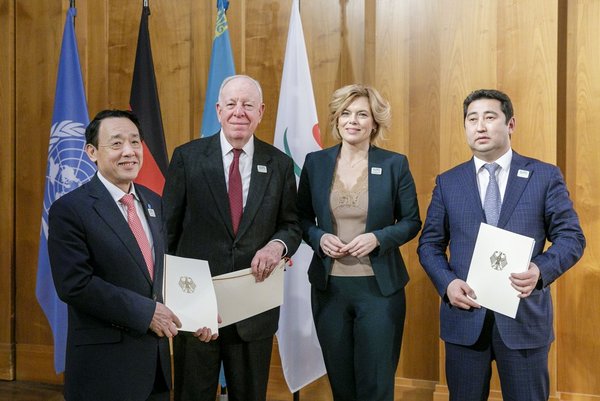 In mid-January, Germany’s Ministry of Agriculture traditionally invites the Minister’s counterparts from all over the world to Berlin to discuss agrifood policy issues. This year, the role of trade in global food security was on the agenda.

“Trade is indispensable for global food security,” noted Germany’s Federal Minister of Agriculture, Julia Klöckner, opening what was now the 12th Berlin Agriculture Ministers' Conference. The conference is held annually in the second half of January, on the occasion of the Global Forum for Food and Agriculture (GFFA) in the context of the International Green Week in Berlin/Germany. This year, the ministers discussed how trade in food and agricultural commodities and trade in services for agriculture can contribute to achieving food security for the world's increasing population, enhancing nutrition and human health, improving farmers' livelihoods and income, and achieving more sustainable food systems to preserve the planet.

It was important to base international trade on fairness and transparency and ensure that all farmers – including the smallholders in the Global South – were among the winners, Klöckner said. At the same time, requirements regarding e.g. environmental protection or food safety must not be circumvented. In order to guarantee common standards and see to it that market-distorting agricultural subsidies were further eliminated, a revitalisation of the World Trade Organization was indispensable. The Minister also welcomed the creation of a pan-Africa free-trade zone initiated by the African Union.

In a joint communiqué, the ministers pledged their support for international trade in agriculture while simultaneously developing it sustainably. A further demand was that all countries and all social strata ought to benefit from resulting prosperity gains.

In order to help agriculture benefit from trade, the establishment of local, regional and global value chains is to be promoted. Furthermore, the communiqué states that smallholders in particular require support in their risk management and need to be more integrated in the markets, e.g. through promoting cooperatives. Technical and organisational innovations are to make agriculture and the food industry more efficient and resource-friendly as a whole while also enhancing its attractiveness for a new generation of farmers.

“The resolutions we have adopted today are a clear signal for rule- and value-based free trade,” stressed Minister Klöckner before handing over the communiqué to United Nations Food and Agriculture Organization Director General Qu Dongyu, Deputy WTO Secretary General Alan Wolff and Aidarbek Saparov, First Vice-Minister of Agriculture of Kazakhstan, which is to host the 12th WTO Conference of Ministers in the country’s capital of NurSultan in June 2020.