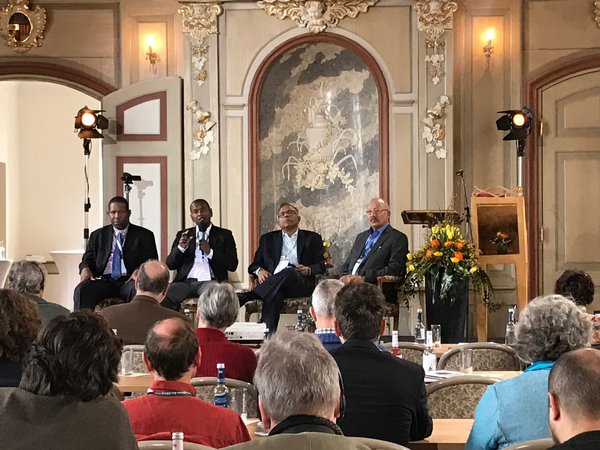 At the 3rd Organic Forum in Kirchberg, Germany, representatives of Sikkim, India – which is the first organic state world-wide – and Zanzibar, Tanzania and Andhra Pradesh, India, presented their approaches in preparing for 100 per cent organic agricultural production.

Hosted by the Akademie für ökologische Land- und Ernährungswirtschaft, the 3rd World Organic Forum was held under the slogan “Green Economies in Context with the UN Sustainable Development Goals: On the path towards 100% Organic!” in Kirchberg, Germany, from the 6th to the 8th March 2019. Representatives of Sikkim and Andhra Pradesh, India and Zanzibar, Tanzania presented their approaches.

One hundred per cent organic – the case of Sikkim

Sikkim is located in Northeastern India and counts 0.6 million habitants with around 66,000 farm families. The total agricultural land comprises 77,000 ha and is cultivated under low input and rain-fed agriculture, primarily for subsistence farming. While the preparations to convert conventional agriculture to organic began in 2003, implementation started in 2010 and was completed in 2016. From 2016 onwards, different value chains have been developed, starting with inputs, seeds and certification, and going on to the creation of facilities for collection, aggregation, processing and a marketing and brand-building initiative. Around 25,000 farmers produce buckwheat, large cardamom, ginger and turmeric as major (cash) crops. This also implies linking growers with consumers on the domestic and the international market.

The organic state of Sikkim was prepared and implemented by a top-down approach. Not only the application but also the supply of chemical fertilisers is strictly prohibited. Corresponding special laws have been formulated, demonstrating ownership and leadership of the State government. Random samples are taken to approve production as absolutely chemical-free. If farmers do not follow the rules, the law foresees various punishments, even gaol.

The archipelago of Zanzibar – also known as the Spice Islands – is part of the Republic of Tanzania. It has a semi-autonomous government responsible for all non-Union matters including the economic and social sectors. Zanzibar’s main economic drivers are agriculture and tourism. Its main agricultural commodities, produced primarily for export, are cloves and seaweed amongst other spices and essential oils. Alone cloves exports account for 75 per cent of export earnings. The spice trade has a long history in Zanzibar. Driven by the government, Zanzibar started certified organic spices production and export in the early 1990s. The value chain has been developed in public-private partnerships with international companies. Nowadays, 750 farmers are cultivating around 1,400 ha fulfilling international organic standards set by importing countries.

The objectives of the Government of Zanzibar were to enter the niche organic market for spices and essential oils and to increase local content in the growing tourist market while protecting the fragile coastal environment and mitigating climate change impacts. Efforts on this way were to put in place appropriate policies and legislations and strengthen quality infrastructure institutions to create competence in food safety and quality control, and to align stakeholders along this process, explained Juma Ali Juma, Principal Secretary Ministry of Trade and Industries in Zanzibar.

“Due to terror world-wide, agricultural production for the international market has become highly vulnerable, as trade is affected by terror,” said Malla Reddy, Ecological Center in Anantapur, Andhra Pradesh, India. This is one of the reasons to focus on local production where consumption takes place.
Andhra Pradesh’s vision 2024 to zero budget natural farming (ZBNF) is clearly set – six million farmers, eight million hectares, fifty million citizens. Demanded bottom-up by the farmers, the programme was initiated in 2015/16, with multiple objectives of enhancing farmers’ welfare, consumer welfare and environmental conservation. Activity areas include microbial seed coating through cow urine and dung-based formulations, enhancing soil microbiome through an inoculum of fermented local ingredients, soil coverage by crops and residues, as well as fast build-up of soil humus through ZBNF leading to soil aeration, improved soil structure, and water harvesting. “Less costly inputs are produced on the farm or in the village. For example, the dung and urine of one cow is sufficient to fertilise twelve hectares,” Reddy said. “Revenues of the farmers have doubled, and sometimes even tripled, in one year,” said Vijaya Kumar, advisor of the Government of Andhra Pradesh.

“This offers a holistic alternative to the present paradigm of high-cost chemical inputs-based agriculture. It is also very effective in addressing the negative and uncertain impacts of climate change,” Kumar told the meeting. “Since the existing extension service system had collapsed broken because of bureaucratic obligations, we created a new one – based on a farmer-to-farmer approach,” Kumar explained. Special emphasis is given to strengthening women’s self-help groups, in which almost 900,000 women are organised.