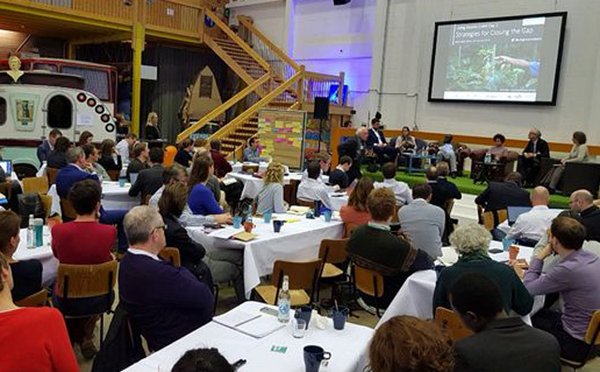 A panel debate on the role of various actors in implementing a living income.
Photo: © ISEAL Alliance

The Living Income Community of Practice is an international working group who jointly works towards a decent standard of living for smallholder farmers in global supply chains. During its annual workshop, co-hosted by GIZ (Deutsche Gesellschaft für Internationale Zusammenarbeit), around 100 participants discussed progress, remaining challenges and the next steps in implementing a living income in global supply chains.

The Living Income Community of Practice was initiated in 2015 by the GIZ Programme Sustainable Agricultural Supply Chains, ISEAL Alliance, the rooftop organisation of sustainability standards, and the Sustainable Food Lab, a US-based think-tank.

Today, the working group is composed of more than 300 subscribers from a diverse set of stakeholders. They include standard-setting organisations such as Fairtrade and the Rainforest Alliance, non-profit organisations like the Voice Network and Oxfam as well as private companies, including Mars, Cargill and IKEA. Government representatives of consumer and producer countries as well as research institutes and consultancy services are further members of the Living Income Community of Practice.

Among this diverse group of actors, the Living Income Community of Practice fosters exchange and collaboration on two major fields of action.

One set of activities focuses on promoting guidance and alignment on methodologies for calculating living income benchmarks, actual household income and the income gaps. As an example, in 2018, members of the Community of Practice supported two field studies on the costs of a decent living for cocoa producing households in Ghana and Côte d’Ivoire. Building on these results, two further studies by the Royal Tropical Institute (KIT) revealed extreme income gaps between the actual and the living income in both countries.

In Ghana, a typical household of six earned less than half of the income that would be required to afford a decent standard of living. In Côte d’Ivoire, the income gap was even larger. Here, the actual income of a typical family of seven only accounted for one third of an actually needed living income.

The working group’s second major objective is the development of effective strategies for implementing a living income in global supply chains. Regular webinars and annual workshops provide a platform for exchange and stimulate joint action.

Once a year, the Living Income Community of Practice holds a workshop foster the exchange among its subscribers. The focus of this year’s meeting, which took place in Bonn, Germany in late January, was on cross-sector collaboration on methodological and strategic approaches to close the income gap of producers in global agricultural supply chains. In addition to certifying organisations, NGOs and research institutions, representatives of private enterprises and governments of consumer and producer countries were among the more than 100 participants of the workshop.

The participants discussed methods to calculate living incomes, actual incomes and income gaps. Participants pointed out that the methodological debate should concentrate on achieving a swift practical implementation of higher incomes. In addition, they showed a considerable interest in digital solutions for calculating actual and living incomes to ensure a harmonized approach for a better data comparison.

On the second day of the workshop, participants addressed possible strategies to close the income gap. Fair prices and alternative trading models were high on the agenda. It was agreed that living incomes could only be implemented via a combination of different strategies, including income diversification and sustainable purchasing practices.

Participants also formulated the need for a EU-wide regulation on due diligence for responsible global supply chain practices.

Malawi Tea 2020 is an initiative aimed at securing a living wage and income in the Malawian tea sector that involves all actors in the tea value chain. In the context of a panel discussion held by the workshop of the Living Income Community of Practice, some of the organisations involved presented successes and challenges in their co-operative schemes on the way towards a competitive and profitable tea industry that generates living wages and income.

One initial success of the initiative is the negotiation of the very first collective bargaining agreements in the Malawian tea sector. Wages are now at 57 per cent above the national minimum wage, and, compared to other agricultural sectors, they are seeing the highest increase rates. However, the ambitious goal of achieving living wages by 2020 will not be reached. On the way to living wages for tea smallholders, a number of conceptual and practical obstacles still have to be cleared.

The audience was impressed by the readiness the panel guests demonstrated in terms of reflection and self-criticism. It became apparent just how important communication and debate are in such heterogeneous collaborative settings. This once again it demonstrated the importance of a networking initiative like the Living Income Community of Practice.