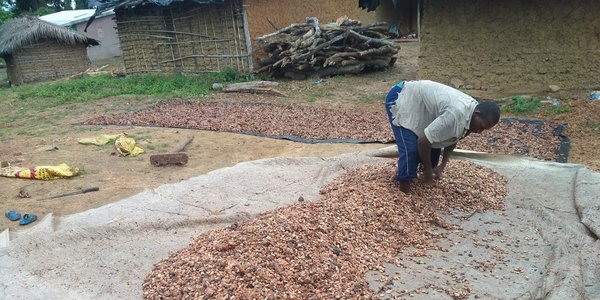 Thanks to its investment in a farmers' cooperative in Côte d’Ivoire, the Agri-Business Capital (ABC) Fund is helping to improve the lives of more than 2,700 cocoa producers and their families.
Photo: ©Bamboo Capital Partners

Swiss international cooperation (SDC) considers private sector engagement key to achieving the goals set out in the 2030 Agenda. As of 24 June 2020, IFAD became shareholder in the ABC Fund through a CHF 9,3 million contribution of SDC. The ABC Fund is managed by the Geneva-based Bamboo Capital Partners, which engages in social impact investing. It invests in farmers organisations, small- and medium-sized agribusinesses, and rural financial intermediaries to boost sustainable smallholder agriculture.

Around the world, smallholders and small- and medium-sized agribusinesses, which process their products for the local market, find it difficult to access the capital they need to grow their operations and step up productivity. One of the primary reasons why they are underserved is the higher-than-average risks associated with agricultural investment. This means that few private investors are active in the agricultural sector, let alone the smallholder segment in developing countries.

It is estimated that boosting the production of the estimated 270 million smallholder households in Africa, Asia (excl. China) and Latin America will require a capital injection of around USD 200 billion. Achieving growth on this scale would improve the food security and health situation for millions of people.

It would also create jobs, which is particularly important given the growing number of young people, especially in developing countries, who are looking for work. In Africa alone, 10 to 12 million young people enter the labour market every year. They need employment opportunities and an alternative to migration.

Investing in rural SMEs and local agribusinesses is essential to spur productivity, improve incomes and livelihoods and importantly create jobs, particularly for rural youth and women.

“The ABC Fund is an impact fund that provides financing solutions to the agricultural community in developing countries. It provides loans and equity investments to support carefully selected farmers' organisations, rural SMEs and financial institutions in low- and middle-income countries. To qualify for support, local agribusinesses and institutions must demonstrate a potential for high growth and job creation. They must also show that they contribute to social development in their respective local community and country”.

One of the most recent investee of the ABC-Fund is the Ghanaian company Dragon Farming, which makes meal, full-fat soya and oil from raw soya beans. Dragon Farming is committed to delivering innovative and environmentally sustainable products that satisfy the nutritional needs of farmed animals in Ghana and beyond.
Emanuele Santi: “The loan from the ABC Fund will enable Dragon Farming to scale up its operations to meet customer demand and increase the volume of soya beans it buys from farmers' organisations.

Higher production levels mean that around 14,000 smallholders will be able to sell their soya beans to Dragon Farming. The loan will reduce the company's production costs while boosting its profitability. Given the planned increase in production, Dragon Farming will also be able to expand its workforce, including its share of female employees. As well as the loan, the company will receive technical assistance to further strengthen its strategy, business development and production processes”.

The SDC is supporting IFAD, the main initiator of the ABC Fund, with a one-time contribution of CHF 9.3 million to the fund. The fund builds on agricultural networks as well as the country-specific, regional and global programmes of IFAD and Bamboo Capital Partners, and creates synergies that bolster its impact and efficiency.