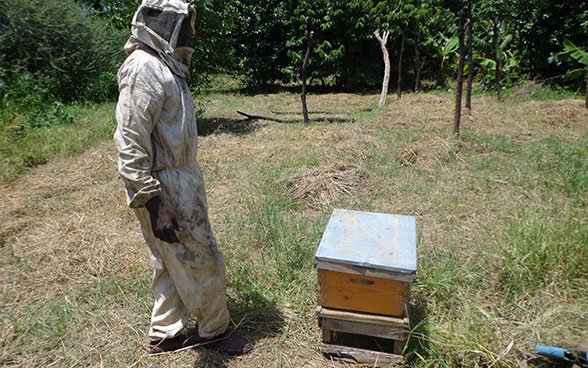 For over 13 years, devastating conflict has dominated Sudan, forcing the population to flee the fighting and destroying their livelihoods in the process. Swiss Development Cooperation (SDC) is supporting a UN reconstruction programme in Sudan which, among other things, aims to improve the economic situation of smallholder farmers.

According to the UN, the armed conflicts between the Sudanese government, the opposition forces and ethnic groups have caused the forced displacement of 3.1 million people inside the country, including 2.6 million in Darfur and more than 550,000 in South and West Kordofan and Blue Nile. In the early months of 2016, the number of internally displaced persons rose further owing to new emergencies, especially in Darfur.

The population of Sudan are dependent on humanitarian aid. This is partly due to the war, but also to repeated natural disasters such as droughts and floods, which have created food insecurity and malnutrition.

By contributing to pooled funds, Switzerland helps to ensure that emergency relief projects quickly receive the financial support they need. At the same time, longer-term reconstruction is required, as livelihoods and resources have been destroyed. Since 2011 SDC has been contributing to a reconstruction programme in Darfur (Darfur Livelihoods and Recovery Programme) implemented by the United Nations Development Programme (UNDP).

One component of this programme is geared towards the integration of smallholder farmers in different value chains. People are given support in restoring their livelihoods in traditional market products such as honey, hibiscus, peanuts, hides and skins.

Switzerland's contribution to the UNDP reconstruction programme goes, among others, into the 'honey' sector of the 'Pro-Poor Value Chain Integration Project'. From 2011 to 2015, the number of households in beekeeping associations rose from 52 to 3,327. In 2015, more than 2,500 beekeeping households received assistance to enable them to improve their production methods and products, obtain access to new markets and financial services, learn about market strategies and use by-products, for example beeswax. This made it possible for them to increase their household income.

The story of Abdul-Aziz the beekeeper

The farmer Abdul-Aziz Mohammed Salih had to leave his village Bindisi in the Central Darfur region of Sudan with his wife and children because of the conflict in his country. They found refuge in a camp for internally displaced persons. After a few months he decided to return to his village and pick up where he had left off – with farming and beekeeping.

In 2013 he came to the UNDP honey project and attended all the training sessions. Since then he has produced more honey and beeswax, which he prepares for sale at markets in the immediate vicinity and further afield.

"Since I began my beekeeping business with the support of this project, I have been able to feed my family from the honey and beeswax I produce and process. I sell my products on the local market and also farther away in Nyala, Khartoum and Omdurman," he says.

Switzerland's cooperation strategy for Sudan focuses on three areas: food security and livelihoods, basic services (health, water and sanitation), and human security (human rights). The SDC supports projects in the Darfur, South Kordofan and Blue Nile regions, and is able to implement additional activities at short notice in other regions when required.

Website of United Nations Office for the Coordination of Humanitarian Affairs, Sudan